Conventional ‘wisdom’ says that Australia’s Aboriginal people have occupied the land for at least 40,000 years. That view of course derives from the evolutionary timeline, which links these people to a supposed ‘Stone Age’, with its attendant ‘prehistoric’ and ‘primitive’ connotations. And while it’s no longer socially acceptable to speak of nomadic hunter-gatherers as being ‘lesser evolved’ than other peoples, such implications from evolutionary teaching remain widely held.

Consequently, when facts come to light which contradict evolutionary stereotypes, it can come as quite a surprise to those who believe evolution. British-born astrophysicist Ray Norris speaks of this. He clearly accepts the evolutionary timeline, as his role at the Australia Telescope National Facility (CSIRO) includes researching “how galaxies were formed after the Big Bang”.1

A personal interest in how Aboriginal people view the stars has led to him also becoming Adjunct Professor in Indigenous Studies at Macquarie University.2 He relates:

“Like many people, I associated Aboriginal culture with art, and music, and dancing, and not particularly with figuring how eclipses work, or explaining the phases of the Moon. Besides, we are often told things like ‘Aboriginal people count one, two, three, many’. I even have an anthropology textbook which states categorically ‘No Aboriginal language has a word for a number greater than four’. Could people who didn’t count beyond four really work out how eclipses work? Or could the textbook be so wrong? So I started a personal journey which turned up quite a few surprises.

“Take the counting. My wife and I watched some Aboriginal kids playing in a waterhole in the Tiwi Islands, playing a game that kids play the world over. They took turns to duck under the water and see who could hold their breath longest. The other kids started counting in their Tiwi language. But if they could only count to four, the game might be rather short! Or would the kids change to English when they got to five? Of course not! The kids counted to fifty, sixty, whatever, in their Tiwi language. The textbook was totally and utterly wrong. It made me realise that, like many Australians, I needed to lose some cultural baggage! Thus started my journey.”3

Expanding on his comment concerning eclipses, Professor Norris explains that Aboriginal peoples, right across Australia, “had already figured out, long before Europeans arrived, that eclipses were caused by a conjunction between the Sun and Moon moving on different paths across the sky”.3 As he points out, a total eclipse of the Sun is rare—most people will never get to see one. Therefore, Aboriginal people’s detailed stories of solar eclipses “imply an amazing continuity of culture and learning over many generations. Without written records, the knowledge of solar eclipses must have been passed from generation to generation by oral tradition, carefully memorised and passed to the next generation by individuals who would never see an eclipse in their lifetime.”3

Other knowledge passed down included how the Moon is related to the tides, and how to use the stars for time-keeping and navigation. “They had a deep and extensive knowledge of the sky and of the motion of the celestial bodies across it,”3 says Norris—high praise indeed from an expert in astronomy and space science.

Stories about the constellations have been passed down too. And again, there is a striking commonality of these accounts between the diverse Aboriginal tribes, right across Australia. A commonality that can extend even beyond Australia’s shores. A stand-out example of this concerns the Orion constellation and the Pleiades cluster in the constellation of Taurus.

Orion gets its European name from the hunter, Orion, in Greek mythology. Professor Norris explains that:

“Aboriginal people thousands of years ago also gave a name to this constellation. And the really odd thing is that right across Australia you find stories in which Orion is a hunter, or group of hunters.”3

“In Greek mythology, the cluster of stars that we call the Seven Sisters, or Pleiades, was a group of sisters who were chased by Orion. Oddly, almost exactly the same story is found in Aboriginal groups across Australia: the Pleiades are seven4 sisters who are chased by the hunters in Orion. This is amazing—almost exactly the same story about Orion and the Seven Sisters is found in Greek mythology and in Aboriginal Dreaming stories.”3

That same sense of amazement and surprise is also evident on the science pages of Australia’s taxpayer-funded national broadcaster website:

“Surprisingly, these stories are very similar to Greek mythology, in which Orion pursues the Pleiades sisters across the sky.”5 [Emphasis added.]

Surprising indeed, if one had presumed that Aboriginal people have occupied the land for the claimed 40,000 (or more) years, for how could Greek mythology have been transferred to a ‘Stone Age’ culture not just held to be isolated from the Grecian world, but also said to have preceded it? Sadly, such is the commitment to the evolutionary paradigm that when awkward evidence threatens the secular origins timeline, it simply spawns a new round of creative storytelling. Here’s Professor Norris’s ‘explanation’:

In other words, evolution rules, OK? In another forum two years later, Ray Norris repeated his suggestion, and also proffered an alternative—but both peddle only a long-age evolutionary timeline:

“A possibility is that … Aboriginal people independently devised a similar story to the European one. Maybe this isn't too surprising. Orion is a massive pattern of bright stars. It’s the most macho constellation in the sky—a veritable gorilla marching across the summer sky. The Pleiades, by contrast, are a pretty little group of starlets that twinkle endearingly. Add to these the fact that, as the sky rotates, Orion appears to follow the Pleiades into the West, and all the elements of the story are there.

“On the other hand, perhaps the story originated in our common ancestors who moved out of Africa a hundred thousand years ago, eventually producing all modern humans including the Australian Aboriginal people, the Europeans, and everybody else. This could be one of the world’s oldest stories.”3

One of the world’s oldest stories? Not so. The world’s oldest ‘story’ is actually a true account of our origins, in the Bible—an account of history going back to the very beginning of time (which puts paid to evolutionary notions of ‘prehistory’). That account explains that all cultures/peoples of the world today all descended from the dispersion at Babel, just a few thousand years ago. This gives us a much better (true!) framework for correctly viewing Aboriginal and other cultures in the world today, than does the misleading hodge-podge of evolutionary story-telling.

For example, leading creationist author Dr Carl Wieland points out in the landmark book One Human Family, Babel was “ancient Babylon, where astrology and star-worship was strong”.7 So, this makes much more sense of why cultures as geographically disparate as ancient Greece, Aboriginal Australia, early Guatemalan cultures, and Ukrainian folklore should relate the stars in the Pleiades to being seven women, most often sisters. As Dr Wieland writes of the Seven Stars, “Since nothing about their appearance suggests sisters—or even women for that matter—it would be a strange coincidence if the same association had occurred by chance once, let alone several times.” Indeed, much more logical to see the constellation stories as having a common origin, and being a “faint, residual echo of the Babel dispersion”—an echo that, though faint, has persisted for the few thousand years the Bible indicates, not evolution’s tens of thousands of years or hundred thousand years. The implications of that echo are worth pursuing, namely that the Bible is true, with its attendant ramifications for our identity, purpose, and salvation.

Whether it’s the Ferguson riots, or the racially motivated mass slaughter of black people in a Bible study, it’s naive to pretend that this problem belongs to yesterday. The ‘racial divide’ is often painfully visible on Sunday morning in many church congregations. Yet there are answers, as Dr Carl Wieland shows in his nuanced social commentary One Human Family: the Bible, science, race and culture. Labelled a 'masterpiece' by well-known author and thinker Dr Jonathan Sarfati, this riveting analysis avoids simplistic slogans and ‘politically correct’ solutions, while building on straightforward foundational truths. Readers often comment they wish it were compulsory reading for all.

This highly recommended resource: One Human Family: the Bible, science, race and culture is available via creation.com/store. 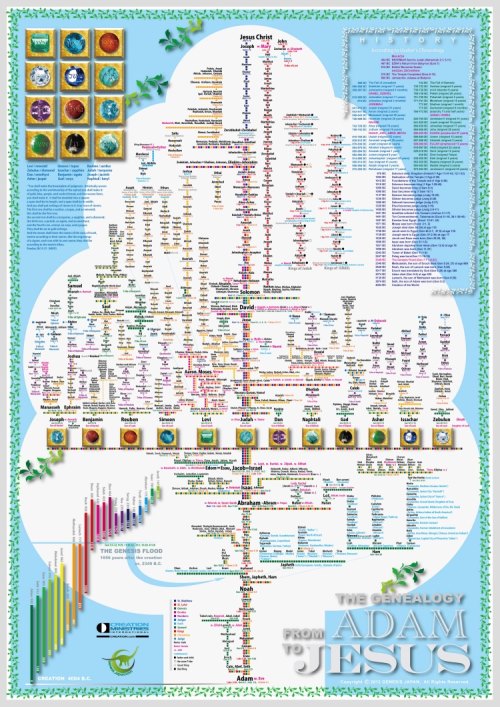