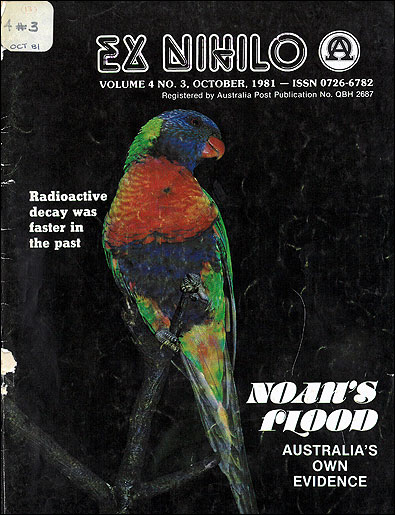 It is the worldwide existence of traditional stories, such as this one from the Australian Aboriginals, which provides evidence that the common ancestor of today’s races was Noah.

‘This is an old time story told by the earliest, profoundly knowledgeable elders,’ said Mickie Bungunie [an old man from the Wunambal Aborigine tribe, Western Australia].

In those ancient days Gajara was still a human creature, living along with his wife and with his sons who themselves were also married.

It came about that the earliest-time children living in those far-off days mocked, tormented and ill-treated the Winking Owl, Dumbi. They plucked out his feathers; they spat on him; they pierced him many times with grass spears, even thrusting a hole through his nasal septum.

Up into the air they tossed him, jeering at him, ‘Now fly!’ But he fell down on to the ground with a thud. This they did again; and again Dumbi thudded to the ground. A third time those children threw him up into the air, but this time Dumbi continued to go up and up through the clouds out of sight and right on up to Ngadja, the Supreme One.

‘What has happened to you?’ asked Ngadja, the Supreme Being. ‘What have they done to you?’

The owl then presented his complaint to him, saying, ‘The children mocked me; they held me in ridicule and persecuted me.’

Ngadja, the Supreme One, was inwardly grieved and felt deep sorrow for him, so he gathered his followers together and held a council with them. Among the many followers of Ngadja gathered to this council meeting were Maguriguri [the sidewinder lizard], Windirindjal [another kind of lizard], the eel, the freshwater turtle, and the black goanna.

‘Go,’ said Ngadja, ‘see where these people are; peer over the range and see if they are still camping in that same area, then come and tell me.’ This he said to his followers for he was truly sorry that these children had mocked Dumbi.

The first one to be sent was Maguriguri. He, the quick-legged one, ran to the place called Dumbey which is the range that lies across the country in that place. On returning he reported that they were all still there. Ngadja sent him again, saying, ‘Go again to the same place; see if they are still there.’ Maguriguri went to spy once more and returned again with the same report to Ngadja.

Ngadja, the Supreme Being, then instructed Gajara [who at that time was still a man], saying, ‘If you want to live, take your wife, your sons and your sons’ wives and get a double raft. Because of the Dumbi affair, I intend to drown every one. I am about to send rain and a sea flood.’

‘Put on the raft long-lasting foods that may be stored,’ he told him. ‘Foods such as gumi, banimba, and ngalindja, all these ground foods.’ So Gajara stored all these foods. He also gathered birds of the air such as the cuckoo, the mistletoe-eater, the rainbow bird, the helmeted friar bird and finches—those he took on the raft, and also a female kangaroo.

Ngadja then said, ‘All is ready now.’ He thereupon sent Maguriguri to peep at the people for the last time. ‘Ah!’ the lizard said, gesturing in their direction. ‘They all remain in one place!’

Gajara gathered his sons as the crew, and his own wife and his sons’ wives together. Ngadja the Supreme One gave Gajara some of his own foods. Then Ngadja sent the rainclouds down, shutting the clouds in upon them. The sea-flood came in from the north-northeast and the people were closed in by the saltwater flood and the tidal waters of the sea. The flood began to sweep all the living creatures together and was pushing them all along to one place, Dumbey. Here the waters were spinning in a whirlpool and the people were screaming as they looked for a way of escape. Ngadja whirled the flood waters and the earth opened, drowning and flattening them all. He finished them at Dumbey.

Meanwhile, the flood carried all those who were on the raft with Gajara along on the current far away to Dulugun where the world ends and the waters flow over. That is where the flood had been taking him all the time, the place of the dead, where there is no land. The waters were rolling him this way and that way and spinning him around for a long, long time.

At last, however, the flood-waters brought Gajara back in this direction. He sent some birds out from the raft, first the cuckoo. The cuckoo found the land and did not return to him. Gradually the waters were going down. The first land that Gajara sighted was the hilltop at Ngumbindji [Doubtful Bay]. ‘Oh!’ he said, ‘I have found a hill!’ and he was glad within himself. Then, as the waters continued to go down, he sighted Numbuzare [Mt Waterloo].

Later on, the other birds returned to Gajara and he sent them out again the following day. They arrived on the land and met Dumbi, the owl who said, ‘Oh, you have returned already!’ and invited them to stay. The land was already drying the waters up and the living creatures found a home and food. Soon in many places the owls were breeding.

As the flood subsided Gajara noticed that it was leaving a water-mark like a painting along the hills. This is the flood spirit line, left there where the flood made it. The waters were taking him past Munduli [Montilivet] when he bumped into a rock. [Munduli is ’the tomahawk place’ where they used to get stone for tomahawks.] Gajara was bumped off the raft with a splash and sank to the bottom. On the bottom of the sea he walked to the shore of the mainland.

His sons and his wife paddled the raft towards the shore where they met him. His sons wailed for him, crying. ‘Father has come out to us with a lot of heavy seaweed and oysters all over him,’ they said among themselves. They removed some of the oysters, prising them off, and threw the seaweed into a heap. The heap turned into a lump of rock, where it remains a monument to this day.

The Wandjina’s spirit went out into the cave where he is painted. ‘I want to turn off here,’ he said; so he turned off, and for this reason the place is called ‘The Turn-off Place’. He went into the cave and lay down. The hornets are numerous down in that cave; we do not touch it; it is taboo. That is, the Gajara cave is taboo.

With regard to the kangaroo which they had taken with them on the raft and which was still with them when Gajara went down, and forced his way through the sea, and came out on the shore, they killed it after landing; and Gajara’s wife Galgalbiri put it in the earth oven and cooked it with other foods.

The smoke rose slowly until it reached through into the sky. Ngadja, the Supreme Being, said, ‘Oh, what is that smell? Ah, they are cooking a good kangaroo! The marrow smells; I can smell the odour.’ He could smell the steam and smoke rising from the female kangaroo as it was cooking and he was pleased.

Ngadja, the Supreme Being, put the rainbow in the sky to keep the rain-clouds back.

The rainbow lies bent across the sky; he ties up the clouds behind it and the rain does not come. The rainbow keeps the clouds back and protects us so that the rainfall does not rise too high. Our people understand the significance of it. When we see the rainbow we say, ‘There will not be any abnormally heavy rain.’