Abalones are shellfish famous both for their edible flesh and the brilliant colours of its inner shell. The Maori people of New Zealand call it paua (pronounced PAH wa), and make beautiful jewellery from the shells. But materials scientists are interested in its great strength, and hope to learn how to make body armour using its techniques. Technology copying the designs of life is called biomimetics.

Other shells, such as the conch, also use intricately structured composite materials to produce great strength.1 They are mainly made out of calcium carbonate (CaCO3), with a tiny amount of protein, but it’s the way this is arranged that makes the shells so much tougher than pure calcium carbonate could ever be. The abalone has a different but equally ingenious structure of protein and calcium carbonate.

The abalone shell is made of two types of calcium carbonate: calcite for the rough outside, and aragonite for the smooth inside,2 which is also called nacre or mother-of-pearl. Engineering researchers at the University of California, San Diego, have now found out how the abalone’s inside shell grows, and why it is so strong.3 They inserted very thin glass slides into the growing shell, which the abalone accepted as part of the shell, and grew new shell on top. Then they removed it at different time intervals to analyse the material under an electron microscope.

The animal grows its shell by first depositing a protein layer. Then calcite grows on top of that. Then a number of proteins turn this into aragonite, which would not normally form because it is less stable.4 These tiny crystals are all aligned in the same direction.5 Then a specially structured protein stops growth outwards, otherwise they would form needles.

So then the crystals grow sideways into tiles, stopped only by the neighbouring tiles. Regardless of the size of the abalone, the tiles are all about 0.5 microns thick (about one-thousandth the thickness of a strand of human hair) and 10 microns in diameter (1 micron is 1/25,000 inch). Then an even thinner protein layer forms to separate one tile layer from the next. A new layer starts before the previous layer is filled in, which makes the growing shell look like a forest of Christmas trees.3

The tiles end up as irregular stacks, and they affect light to give the typical mother-of-pearl appearance. However, the tile layers are regular, and separated by a protein layer about 10–20 microns thick. This protein bonds the layers together strongly, but also allows the tiles within the layer to slip apart a little. This slippage absorbs the energy of a heavy impact.

The protein layers also have another important part to play. They strongly hinder cracks from going through the shell.

Mehmet Sarikaya, a materials scientist and nacre expert at the University of Washington, said, ‘Nature has designed an interface of organic and inorganic materials interpenetrating in ways that we cannot yet equal.’6

… even the simplest bio-induced structures are currently impossible to synthesize.

In the first paragraph of their scientific paper,3 the nacre researchers pay the compulsory homage to the wonders of evolution by natural selection over millions of years. But they provided no specifics of how such a fine coordination of chemical processes could arise by a series of accidents. And note that each step in the alleged evolutionary pathway must be an improvement on the previous stage for natural selection to act. So evolution provided no insights whatever.

Instead, the researchers analyzed the making of the shell as if it were a design engineered for toughness. Indeed, they said, ‘ … even the simplest bio-induced structures are currently impossible to synthesize.’3

Thus it makes good practical scientific sense to believe it really was designed by a Synthesizer whose ability far outshines our own (Isa. 55:8–9). 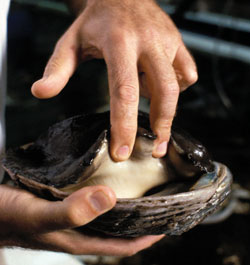 Humans have made laminates (layered materials) for a while now, but these lack the slippage between layers that the abalone shell has. So when a layer breaks, the whole structure is weakened.1

However, Kenneth Vecchio, mechanical and aerospace engineer at the University of California, San Diego, has modelled his design of tough armour explicitly on the abalone. When he was a boy in the 1970s, Dr Vecchio could not believe how hard it was to break seashells. ‘They looked fragile, but I’d have to hit some of them with a hammer to get a piece off.’2

Vecchio compressed alternating layers of aluminum and titanium alloy foils, then heated them to 700°C (1300°F). These metals reacted to form a hard ‘intermetallic’ ceramic-like layer of titanium aluminide (TiAl3), while there was a residual pliable layer of titanium alloy. Thus the result was a ‘metallic intermetallic laminate’ (MIL), alternating between a thicker layer of hard, brittle material and a thinner layer of more flexible material, like the abalone shell.

To test the strength of his new material, Dr Vecchio fired a heavy and hard tungsten alloy rod into a 2 cm (¾ inch) thick sheet of his new material at a speed of 900 metres per second (2,000 mph). But it penetrated only halfway through. That means it can stop bullets. This armour is also lightweight, so would be good for aerospace applications.

Dr Vecchio’s work was the cover story of the March 2005 issue of the Journal of the Minerals, Metals and Materials Society.3