An eye for detail

Why your eyes ‘jitter’

When you fix your gaze on something, your eyes ‘jitter’, i.e. they make small, involuntary movements. These jitters wiggle the image on the retina. In the 1950s, researchers using cumbersome mirrors to negate the jitter when volunteers looked at an object discovered that the volunteers began to lose sight of the object (disappearing into a featureless grey), so the researchers concluded that jittering kept the image from fading.

More recently, Boston University neuroscientist Michele Rucci and his colleagues, using computer technology to track the eye’s movements, discovered that the jitters are crucial to helping the brain discern the finer details of an image.1 Negating the jitters resulted in a 16% reduction in volunteers’ ability to pick out the details in fine-lined patterns—the same ability needed in locating a single tree in a forest, or a berry on a bush.

‘Vision isn’t like a camera, where you take a picture and the brain processes it,’ explains Rucci. ‘The actual process of looking … affects what you see.’2

Who would have ever thought that the eye’s involuntary movements had such a crucial function? Obviously the eye’s Creator knew what He was doing. He had an eye for detail—that we might have the same. 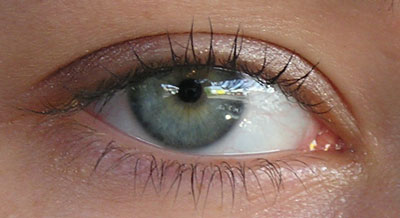 The human eye—just look at what it can do! For example, the eye’s dynamic range exceeds that of the best man-made photodetectors, and is now known to have intricate microscopic machinery behind it—a motor, glue, ‘calmer’ and internal ‘train tracks’; all beautifully coordinated. (See Excellent Eye.) All evidence of design, and therefore a Designer.

Note: Some creationists, in their witnessing or when debating evolution, like to use Darwin’s quote about the absurdity of eye evolution from Origin of Species. However, citing his statement at face value is subtly out of context, which is why we have included it in our list of the Arguments we think creationists should NOT use. (DVD available here.) Darwin was talking about its seeming absurdity but then said that after all it was quite easy to imagine that the eye could be built step-by-step (in his opinion, with which we obviously disagree—see also Darwin v The Eye and An eye for creation). But anyone claiming that step-by-step evolution of the eye is ‘quite easy to imagine’ would do well to consider whether such imaginings have any basis in fact. (They don’t.) See Eye evolution, a case study; and The good, the bad and the evolutionary.

For further information about the incredible eye see Darwin vs. the eye; also Dr David Menton’s DVD The Hearing Ear and the Seeing Eye explains that without the ‘jitter’ we would see our retinal blood vessels, because brain programming removes any unchanging image.