If the earth–moon system were billions of years old, one would expect a gradual slowing of the earth’s rotation and a gradual increase in the earth–moon distance due to tidal friction. Thus, both day length and the lunar month should be getting longer over time. Evidence for shorter ancient day lengths supposedly comes from analyses of skeletal banding patterns in Paleozoic corals. This argument is not common, but it does surface from time to time, most recently in a campaign poster put out by the Biologos Foundation, which advocates for biological evolution and an ancient Earth. There are several significant problems with the argument, however, including that the relevant scientific studies were contradicted soon after they were published. While the creation model can account for some changes in Earth’s rotational speed over time, we probably do not require any to answer the Paleozoic coral banding challenge.

The Biologos Foundation is well known for their advocacy of an ancient Earth and support for evolutionary biology, geology, and astronomy. In a recent campaign poster titled ‘How do we know the earth is old?’, Biologos brought out eleven arguments purporting to show the earth is very, very old.1 Interestingly, all but one has been dealt with previously in this journal. The one odd argument is older, but less well known. Let me quote the poster in full:

“Corals: Some types of corals produce annual growth layers as a result of differing density and seasonal incorporation of organic material. The record is clear enough in well-preserved samples to count the number of days in a year. Ancient corals preserve a record of a greater number of days per year due to a gradual slowing of Earth’s rotation.”

This claim (in several different forms) has been circulating for several decades and I thought it time to critically assess the relevant data. Sadly, Biologos has muddled the issue to the point where it cannot be salvaged, but most readers would not know that.

Considering these five points, I cannot, with confidence, say that what we know about Scleractinian growth patterns today can be applied to the extinct horn and table corals. This is an important objection, but Biologos seamlessly bridges these gaps without further consideration.

Evidence for shorter day length in the past

Let us now deal with the claims that these extinct animals show daily growth patterns (with annual oscillations) that prove a shorter length of day in the past. From what I have managed to find, this claim comes from the scientific literature, but either from older reports5 or through references to these older materials.

The argument for coral growth bands indicating an ancient Earth was nullified in 1964.

The tidal friction between the moon and the earth is causing the moon to slowly withdraw from the earth (as it gains potential energy).6 The net effect on the earth is a gradual slowing of its rotational speed, leading to shorter day length in the past. The effect is thought to add approximately 2 ms of day length per century. Coral skeletal growth is complicated, but it is also linked to day–night cycles. Skeletal extension occurs mainly at night and can be measured with laser interferometry7 (the same method used to measure lunar recession). The periodic lengthening of skeletal elements leaves behind a tell-tale signal in the calcium carbonate crystals. This is a micro-scale phenomenon and is not the same thing as the density banding caused by dissepiment spacing or fluorescent bands caused by humic acid staining (the two examples specifically given by Biologos). Examining the fine structures in the skeleton of a modern coral, and estimating the distance from one annual band to the next (based on a visual estimate of density bands), Wells (1963) counted about 360 bands per year. That is a pretty reasonable measure. Looking at a few rugose corals in good states of preservation gave him a range of between 385 and 410 lines per year in the Middle Devonian (dated 359–416 Ma ago). Examining two corals from the Pennsylvanian (currently dated between 299 and 318 Ma ago) gave a measure of 385 and 390 lines per year. Importantly, all of the ‘ancient’ samples yielded more than 365 days per year.

Before we conclude this case is closed, however, we must consider the unknowns discussed above. A direct correlation between Scleractinian growth patterns and those of extinct Paleozoic tetracorals is difficult, if not impossible, to demonstrate. Yet, even if the rugosa do give us a way to measure the number of days in a year in ancient times, there are several other issues to consider. First, could day length have been affected by the Flood? There has been a significant redistribution of mass in Earth history, including factors such as:

In any rotating system, one must account for the conservation of angular momentum when the mass distribution changes. All of these processes could have affected the rotational velocity of the earth, although several, perhaps all, would be expected to have small to negligible effects. The amount of day length adjustment required is less than 10%. Can Flood processes explain this much of a change? How much do we actually know about Earth’s historical rotational dynamics?

Since the growth lines in Paleozoic corals do not reflect the current number of days in a year, it may be that the lines have nothing to do with day–night cycles.

Actually, we may not even have to work out a model that includes changing the speed of rotation of the earth, even if it is an interesting mathematical problem. Scrutton (1964)8 claimed banding in rugose corals follows a monthly, not an annual, pattern. To be fair, Scrutton believed that days were shorter in the Paleozoic, but he strongly associated banding to lunar, not diel (‘daily’), cycles. In fact, he could find no evidence of annual variation in the material he examined (all of which were finely preserved specimens now in museum collections). Using 399 days per year for the Middle Devonian (a figure derived from Wells, whom he was contradicting), and his calculated average of 30.35 fine ridges between (monthly) bands, he calculated 13.04 lunar months per year. This would mean that the moon was closer to Earth, as expected given millions of years of lunar recession. But this is circular reasoning. Using the modern figure of 12.37 lunar months per year, and his calculation of 30.35 fine ridges per band yields a year of 375 days, which is much closer to the modern value. The argument for coral growth bands indicating an ancient Earth was nullified in 1964. Biologos did not do their homework.

Why would these organisms display monthly changes in growth rate? Tidal fluctuations might have changed the distribution of currents, food, and/or nutrients, but lunar breeding patterns are more likely. Many modern corals have an annual breeding cycle strongly associated with the moon. They expend a considerable amount of energy producing enormous numbers of eggs and sperm and release them near-simultaneously only on certain nights of the year. This is expected to affect the amount of energy they put into skeletal growth, but how much is a matter of continuing research. Other corals, mainly the smaller, weedier types, release pre-fertilized planula larvae, often on a monthly cycle tied to the moon. They also put a significant amount of energy into producing progeny. This is a potential explanation for what we see in the Paleozoic corals, the form of which and apparent lifestyle better match the weedier corals.

Yet, since the moon shows great evidence of large meteorite impacts from a preferred direction,9 I am not certain that the moon has maintained the exact same orbital periodicity over the last several thousand years. The mass of the impacting meteorites would have been much less than that of the moon, so the effect should not be large, but it might still be measurable. Even so, and like the discussion of the earth, above, we may not have to worry about the moon. In his comprehensive review of the paleoecology of Paleozoic corals, Scrutton (1998)10 left out any discussion of diel banding patterns, let alone a discussion of it demonstrating shorter day lengths in the past. I find this significant. I am not an expert in Paleozoic corals or the descriptive literature in this field (my doctoral work dealt with the genetics, ecology, and morphology of certain living Caribbean corals, and I have published analyses of microscopic skeletal features in living corals11). Even so, I have been unable to find recent corroboration of the earlier claims.

Since the growth lines in Paleozoic corals do not reflect the current number of days in a year, it may be that the lines have nothing to do with day–night cycles. It is an assumption that the Rugosa or Tabulata could detect light. Most living members of Phylum Cnidaria (corals, jellyfish, anemones, etc.) can, and the zooxanthellate species have an additional signal coming from their symbiotic algae. Scrutton (1998) said it is doubtful any Paleozoic coral was zooxanthellate, but could the Rugosa and Tabulata also detect light? Although it is likely, it is still an open question.

Unknown, oscillating parameters including tides, food supply, moonlight, daylight, seasons, and year length, affected the physiological state and skeletal growth patterns of non-aragonitic, non-zooxanthellate, now-extinct, ‘Paleozoic’ corals. Biologos claimed patterns in the fine structure of these extinct coral skeletons is evidence for an ancient Earth, but it seems the most pertinent studies were contradicted almost as soon as they were published in the 1960s. And, while creationist models could incorporate some changes in day length and the lunar month without having to resort to an ancient, steady-state Earth, we do not have to do so, for the evidence seems to fit a normal year, with fewer inherent assumptions. 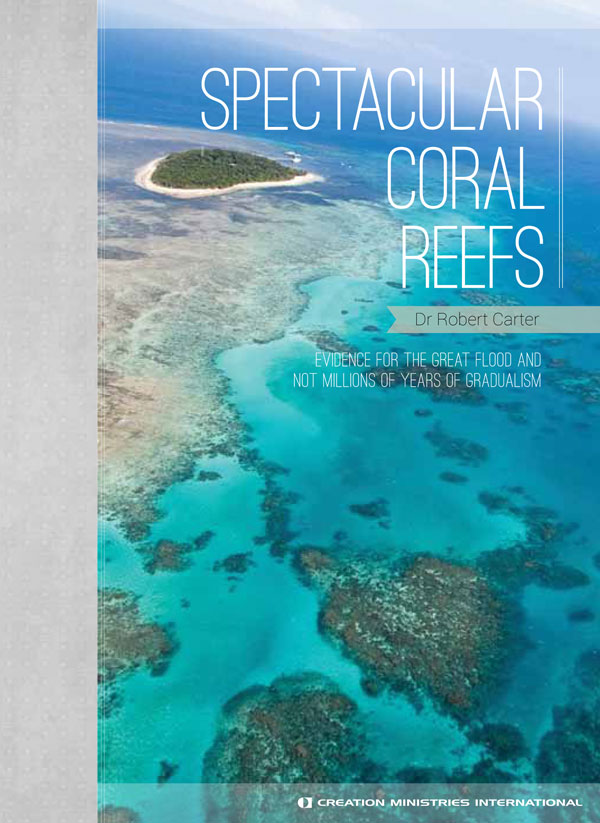