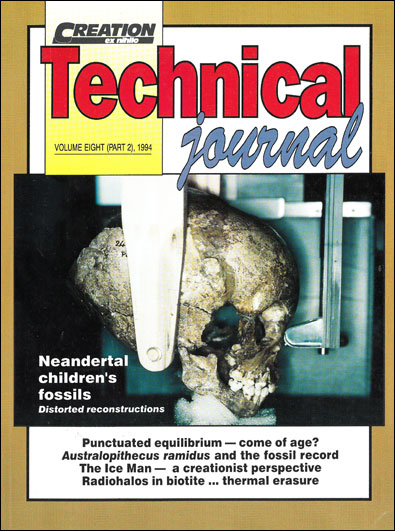 The announcement of the discovery of Australopithecus ramidus1,2 generated much interest in the scientific media in 1994.3,4 The authors boldly claimed,

‘The fossils already available indicate that a long-sought link in the evolutionary chain of species between humans and their African ape ancestors occupied the Horn of Africa during the early Pliocene.’5

The popular press hailed the find as the missing link between apes and man, and the most ancient human species known to date.6

What was found? Fossils were collected from the surface at 17 different positions7 spread over 1.55 km (see Figure 1)8 and probably represent 17 separate individuals. The holotype (ARA- VP-6/1) is based solely on eight teeth, most of which were damaged. Other material discussed as representing A. ramidus included parts of the base of a skull (ARA- VP-1/500) found 550m away, and fragmented arm bones (ARA- VP-7/2) found 270 m away. The larger pieces of bone exhibited carnivore teeth marks. Eleven of the fossils were comprised of a single tooth, a piece of tooth or, in one case a piece of bone. The paucity of material is illustrated in the detailed treatment given a single deciduous (temporary) molar tooth found 1.55 km from the location of the holotype.9 In appearance and measurements this tooth looks identical to a chimpanzee (Pan paniscus) tooth.


Figure 1. Location map showing where the A. Ramidus fossil remains were found (▲) in Aramis and Adgantoli catchments of the Middle Awash area of Ethiopia (click here for larger image).

Does all the material belong to the same species? In discussing other vertebrate fossils found in the area, WoldeGabriel et al. said,

‘Primates are very abundant, comprising a large percentage of the overall fauna. There are at least three primate taxa.’10

Colobine monkeys account for over 30% of the 649 vertebrate fossils collected. Specimen ARA-VP-1/128, which was found 1.55 km from the holotype and comprises nine associated lower teeth, was utilised greatly in the comparisons and discussion. The right fourth pre-molar tooth is represented in both the holotype specimen fossil (ARA-VP-6/1) and ARA-VP-1/128. However, the two teeth differ significantly, with the buccolingual lengths being similar but the mesiodistal dimension of the ARA-VP-6/1 tooth being 22% larger than that of the ARA-VP-1/ 128 tooth. Such a difference in shape, as reflected in the measurements, would be unlikely if the teeth belonged to the same species. The lower third premolar is also represented in both ARA- VP-6/1 and ARA-VP-l/128, and these teeth also differ significantly in shape, suggesting again that ARA-VP-6/1 and ARA-VP-1/128 do not represent the same species. The differences could possibly be due to sexual dimorphism within the same species, but with only two teeth this is impossible to determine. Alternatively, fossil teeth of different primate species have been combined. This could account for the apparent mosaic of characters which led the authors to argue that their find is not a chimpanzee or a known australopithecine.

The authors describe the cranial fossils as

The arm bones are described as showing

‘a host of characters usually associated with modern apes.’12

The authors speak of probable derived features shared with ‘other hominids’ and emphasise perceived differences with modern apes. In this context they said,

In other words, this supposedly distinguishing characteristic is also sometimes seen in African apes anyway.

Overall, similarities to Australopithecus spp. are few, whereas similarities to chimpanzees are plentiful. Indeed, Wood, in reviewing the work, raised the question as to whether it would have been more appropriate to allocate the specimen to the genus Pan (chimpanzees) rather than Australopithecus.14 Wood argued against this, proposing that the many similarities to African apes are ‘primitive retentions’ or ‘examples of convergence’ whereas the three ‘hominid characteristics’ identified are ‘derived’. This sounds very much like interpreting the evidence to fit beliefs - the priority of the paradigm. The three ‘hominid characteristics’ claimed are: a modified canine/third premolar complex, an anterior foramen magnum, and the morphology of the elbow end of the ulna. In regard to the canines, White et al. admitted that some worn female Pan canines look ‘superficially’ similar.15 The enamel thickness is also similar to chimpanzees and most unlike Australopithecus. Indeed the published drawings of the teeth16 suggest close similarity of the Aramis canines to Pan. The claims about the cranial and arm fossils must be viewed critically in view of the carnivore damage exhibited by these bones. White et al. also mention reduced sexual dimorphism as a hominid feature of A. ramidus, but how the degree of sexual dimorphism was determined with a maximum of two teeth of anyone type we are not told.

If A. ramidus turns out to be a valid taxon, it will still not be justified to claim it as ‘the missing link’ because Oxnard has shown, using various statistical analyses of measurements of replicated teeth, that Australopithecus is unlikely to be ancestral to Homo sapiens.17 Recent work on the organ of balance in the inner ear has confirmed that if Australopithecines were bipedal, it was not in the human sense, because the semi-circular canal dimensions of Australopithecus resemble those of living great apes, not Homo.18,19

Like many previous claims about new fossil evidence for the evolution of mankind, this one seems like another case of ‘much ado about nothing’. Indeed, an editorial note in Nature expressed some caution:-

‘the attractive epithet of the “missing link” had better be avoided until it is possible to answer with some clarity the question “With what?”’20