Initially labeled a rodent when first discovered (due in part to its sharp, rat-like front teeth), the elusive aye-aye (pronounced ‘eye-eye’) of Madagascar is now classed as ‘without doubt the world’s most unusual and unique primate’. 1–3

The aye-aye is nocturnal and keeps mainly to the treetops, though is occasionally seen moving along the ground. It has yellowish-orange, round saucer-like eyes, distinctive hairless spoon-like ears, a bushy tail, and scraggly-looking body hair.

Its slender toes and fingers have claws, rather than nails. A particularly distinctive feature is the skeletal third finger of their hands—being thinner, substantially longer and more flexible than the others. (The increased flexibility is enabled by ball-and-socket joints, like those of hips and shoulders).

Another unusual characteristic of the aye-aye (for a primate) is the position of its mammary glands—the nipples which nourish its young are situated not on its chest, but are inguinal (i.e. on its abdomen).

These and other distinctive features of the aye-aye present a challenge to scientists endeavouring to ascribe evolutionary relationships/origins to the aye-aye—see below ‘Problematic’ lemurs? Aye-aye!

The diet of the aye-aye is largely wood-boring grubs, which are found under the bark of trees. The aye-aye uses its long middle finger to carefully tap the wood, and it uses its excellent hearing to listen for signs of movement. When it detects grubs it gnaws the wood with its imposing incisors and tenaciously digs through it to extract the worms, using its flexible third finger to extricate them from their woody burrows. Such ‘percussive foraging’ puts the aye-aye in the same ecological niche as that of the woodpecker elsewhere.3 The aye-aye will also eat fruits, nuts, nectar, seeds and fungi if given the opportunity. Farmers see it as a raider of their crops, and therefore kill them, further reducing their scant numbers. (See also box: The ‘Ghost of the Night’.)

The aye-aye lives in the wild in Madagascar, off the east coast of Africa. It ranges through both dry forest (in the west) and rainforest (east). The total population is only considered to be around 2,5004 and it is classified as ‘critically endangered’.5

There are a very limited number of aye-ayes in zoos or animal research centres around the world (e.g. USA, UK, France and Japan). Due to the rarity of the aye-aye in the wild and the scarcity of captive individuals, relatively few people will ever have the pleasure of seeing a live aye-aye face-to-face (or eye-to-eye!). 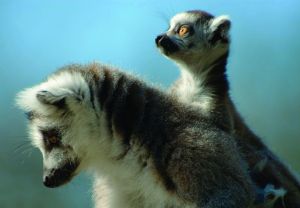 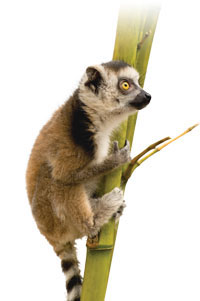 Evolutionists ascribe common ancestry to all living things (ultimately leading back to the supposed single-celled ancestor/s of all life), so it’s not surprising that evolutionists look to the so-called ‘lower primates’, including the aye-aye and ‘other’ lemurs, as being representative of what the ancestors of so-called ‘higher primates’ (gorillas, chimpanzees, humans) might have looked like. However, in addition to the lack of fossil transitional forms1 and other ‘awkward’ fossil evidence,2,3 the whole area of lemur taxonomy, and particularly how the aye-aye might relate to ‘other’ lemurs, has been described as ‘notoriously problematic’.4 Even the aye-aye’s status as a primate has been questioned.5

For Bible-believing Christians however, there is no definitive need to address the question (though interesting) of whether the aye-aye is related to the Madagascan lemurs. ‘In the beginning’ God created and programmed living things to reproduce ‘according to their kinds’ (Genesis 1:1,20–28), which, barring extinction in the meantime, they’ve been doing ever since. So how did the aye-aye and lemurs migrate across the sea to Madagascar (post-Flood)? Evolutionists have themselves suggested that the creatures arrived there on rafts of matted vegetation6—just as is periodically observed to happen on islands today.7

Evolutionists label the aye-aye as being a ‘lower primate’ and ‘primitive’.8 So they have been surprised at certain unexpected discoveries, e.g. the aye-aye had been thought to have ‘relatively simple’ social structures, but is now known to have ‘a complex repertoire of behaviors and communications’.9 And researchers studying colour vision in the aye-aye found that its opsin genes were ‘absolutely fully functional, which is completely counter to how we had believed color vision evolved in nocturnal mammals’.10 Of course, colour vision could hardly be considered ‘primitive’.11 Rather, it testifies to a Designer, whom we know looked at all He had made and declared it ‘very good’ (Genesis 1:31). 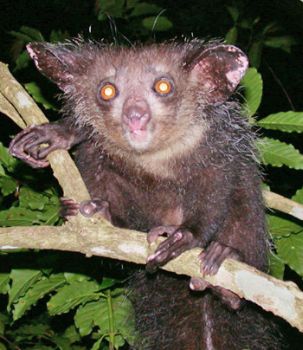 The ‘Ghost of the Night’

With its ghoulish appearance, the aye-aye is subject to a lot of superstition by the locals of Madagascar. Many there believe that the aye-aye is a kind of man—or even like a ‘god’.1 One must kill an aye-aye when sighted, so it is believed, in order to prevent it from pointing its long third finger at you and cursing you.2 This ‘omen of death’ superstition has led to the wanton killing of many aye-ayes. Some villagers even believe that aye-ayes can crawl into their homes at night, find them in their bed, and use their long middle finger to kill them by puncturing the major blood vessels in the neck.3 Thus, they think it is necessary to kill the aye-aye first.