An ideology divided against itself is easily exposed

Guiding his busload of tourists through Chicago and surrounds, our coach driver announced that the next scheduled stop would be the renowned Bahá’í temple, and its information center. He spoke very enthusiastically for several minutes about the Bahá’í faith, telling us that, in essence, Bahá’í combines all the good points of other religions into one gentle and beautiful faith.

Upon arrival, we all disembarked and began climbing the steps leading up to the hilltop temple, enjoying the views of the manicured garden surroundings, with its soothing cascades and serene pools of clear water. Entering the temple, the interior was just as breathtakingly impressive as the exterior, but it was the nine large inscriptions in the temple alcoves that caught my attention—two in particular:

The Bahá’í list of ‘prophets’ cannot all have been correct.

Later, down in the fastidiously clean-and-nice visitor information center, the displays continued the ‘all the prophets’ theme, listing, among others, Abraham, Moses, Jesus Christ, Muhammad,1 and Bahá’u’lláh.

However, the Bahá’í list of ‘prophets’ cannot all have been correct. Crucially, the teachings of Jesus about himself as recorded in the Bible are utterly irreconcilable with what Muhammad says of him in the Qur’an. And the Bahá’í have adopted the Qur’anic view of death being a ‘good’ thing,2 rather than the Bible’s teaching that death is an enemy (1 Corinthians 15:26), a curse on the whole creation as a consequence of the first man’s sin.3 A curse which is defeated only through the sacrificial death of Jesus Christ—which the Qur’an says did not happen.4 And yet another contradiction is that the Qur’anic verses concerning the slaying of non-Muslims5 contradict the instruction of the Bahá’í ‘prophet’ and founder, Bahá’u’lláh (1817–1892), to treat all outsiders kindly.

But it was the contradiction in another glass display case referring to the “fundamental harmony of science and religion” that most goaded me to want to initiate a conversation with one of the Bahá’í center officials standing nearby. As it happened, I didn’t have to, for at that moment one of them, a well-groomed Bahá’í lady about 60 years of age, approached me and asked, “Do you have any questions you’d like answered?”

Harmony in Creation?—then what about that lion in Africa that killed the American tourist last week…

“Yes!”, I replied eagerly, pointing to the text speaking of harmony between religion and science. “How is that possible? Your religion, and Islam, and Christianity, all believe in a Creator, whereas modern ‘science’6 says everything just evolved—no Creator was necessary!”

Initially her replies merely echoed the platitudinous text in the display case, so I pressed further, “You must surely have heard of the creation-evolution conflict, how the atheists and other skeptics use evolution over millions and billions of years as their favourite tool-of-trade against religion?”

She said that Bahá’í have no problem with long ages in the past. I countered, “But that contradicts the Bahá’í contention that Jesus spoke as a prophet, because his own words, as recorded in the Bible, ‘At the beginning of creation, God made them male and female’, leave no room for the big-bang-billions-of-years-before-man teachings of science textbooks.”

Evidently seeking to avoid this point, the Bahá’í lady said that her religion is all about “harmony in Creation; we find expressions of God’s attributes in every created thing.” I seized upon this as an opportunity to expose the basic flaw in the Bahá’í ‘death is good’ ideology. “Harmony in Creation?”, I said, “then what about that lion in Africa that killed the American tourist last week, would you say it was doing good?” The Bahá’í attendant looked very uncomfortable, and hastily said, “Bahá’í emphasizes the importance of our awakening, our personal behaviour and spiritual attitude. How we should live.”

Her smile instantly vanished, and she commanded icily, ‘No! Don’t ever say that!—Not in here. Please.’

This rang hollow to me—as I pointed out to her, if Bahá’í are wrong about history (e.g. as highlighted by the reality-denying death-is-good falsehood), then why should I, or anyone else, heed their advice about the ‘right’ way to behave? If they’re wrong about physical and intellectual matters, why trust them about the spiritual and the moral?

She argued back-and-forth with me for quite some time. Only once however, did her demeanour become restrictively assertive. It was when I quoted Jesus’ words: “I am the way, the truth, and the life. No-one comes to the Father except through me.” Her smile instantly vanished, and she commanded me icily, “No! Don’t ever say that!”, adding, as she glanced around anxiously at other visitors in the center, “Not in here. Please.”

That was the only time she tried to silence me from quoting Christ. Mostly she was at pains to try to convince me that Bahá’í revere Jesus’ words in the Bible, and that they read it often. She argued that I would find peace as she had, if only I were to read the writings of Bahá’u’lláh and other Bahá’í literature she was freely proffering: “I read the Bible, you read this!”, she challenged. I replied, “I don’t have to, given the writing that I’ve already seen this morning in your temple and information center contradicts the very words of those you profess are prophets! Your ‘argument’ is divided against itself … ”

At the word ‘argument’ she stiffened, and then forced (as it seemed to me) a smile, saying sweetly, “Oh no—Bahá’í don’t argue. We never argue.” Then hadn’t she been breaking her own religion’s code of behaviour for the past 20 minutes? “No, I’m not arguing,” she argued, “I just want that you have the same peace that I’ve found.”

I explained that while I admired her stated motive, the ‘peace’ she was offering certainly wasn’t anything like the peace into eternity that only Jesus can give, as it’s only through him that we can be saved from ‘the second death’. She said she’d never heard of the second death. I replied, “Then you’ve made your decision that Bahá’í is the way to peace without considering all the available information—your religion pays lip service to Christ yet you’re not aware of Jesus’ words about the second death? And did you know that Jesus said his words would never pass away, and that he warned that after him there would come false prophets?” (If I’m not mistaken, she gasped involuntarily—it seemed to me that these two Scriptures had hit home.) “And while it’s bad enough to believe a falsehood, how much worse yet to be so publicly propagating the words of false prophets—Jesus warned that there will be an accounting for ‘every careless word’. And as He’s the one who created us, it’s to Him that each of us must give account.”

For the past five minutes, conscious of my tour bus deadline, I’d been inching my way backwards, getting to, through, and out the exit doors—by now I was half-way up the stairs leading to the car park. She had come with me the whole way, completely absorbed in our conversation, looking increasingly ashen-faced the more that I quoted Jesus’ words. At this point I thanked her for taking the time to talk with me, and apologised to her that I couldn’t stay any longer. As gently as I could, I said in parting, “I know I can’t force you against your will. But I’ve done my best to show you, if you weren’t already aware, that your religion is a mess of contradictions, utterly divided against itself, and as Jesus said, ‘A house divided against itself cannot stand.’ I urge you to investigate further all the words of Jesus—e.g. what he said to the churches about escaping the second death. And don’t just seek out Jesus’ words, actually seek him, for as he promised, ‘Seek and you will find’, if you seek him with all your heart, for he is not far from every one of us.”

Resuming my seat on the bus, I marvelled privately how, of all things, it was the evolution and age-of-the-earth flashpoint that had provided the engagement gateway to this thrilling and completely unexpected evangelism opportunity (Colossians 4:5–6) in of all places, a Bahá’í stronghold. A correct view of origins is indeed very useful in exposing such ideologies (no matter how externally attractive they might appear) as being hopelessly divided against themselves.7 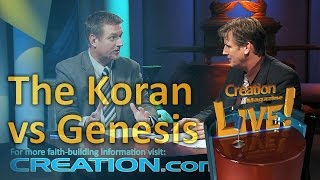