As CMI has documented, science started in a Christian world view, and most of the founders of modern science were biblical creationists. But now, “Christians are one of the most underrepresented groups in science,” according to researchers at Biology Education Research Lab at Arizona State University.1 They conducted three studies to find out why.

Christians are one of the most underrepresented groups in science.— Barnes et al. study.

This widespread perception should not have been a surprise. There are a number of high-profile academics who misuse their positions to attack Christianity and promote their own religion of atheopathy. And they receive little pushback from their peers.2 But still, the researchers wanted to find out if the perceptions of bias matched actual bias.

However, some mentioned that they would not like an “Evangelical” or “Fundamentalist”, one who takes the Bible as authority. They note just what we have: that there is a conflict between the Bible and evolution, but also note what we have lamented: some professing Evangelicals accept evolution.

So they conducted a third study that where an application for a Ph.D. program signaled overt Evangelicalism—but said nothing about evolution. And indeed, they concluded: “Scientists perceive evangelical students as less hireable, less competent, and less likeable.” Furthermore, these scientists denounced evangelical Christianity as “rigid and unchanging” and “discourages diversity of viewpoints”. They didn’t note how atheistic evolutionists are also very rigid and intolerant of dissenting views.

The authors concluded that there is widespread perception of anti-Christian bigotry among scientists. So they thought it was in the best interest of science to counteract this perception. This includes encouraging Christian participation. Notably lacking was a course in the Christian foundations of science, and they advocated presenting examples of Christian evolutionists.

What should we do as parents and pastors?

Many polls have documented that at least two-thirds of youth who grew up in church homes lose their professed faith when they reach college. A major reason is that they are exposed to evolutionary indoctrination, and are woefully under-equipped.

As the trio of studies shows, there is the additional reason: they face actual intimidation and bias from academics. And they will be in an atmosphere where Christophobic hostility is perceived.

However, it doesn’t need to be that way! In our DVD Fallout!, we show that if kids are equipped with good answers in the church and home, they are far more likely to have a real biblical worldview of their own. And they will be all the better for it: e.g. they will be better scientists if they understand the reasons why science exists in the first place.

But CMI doesn’t simply want to provide information—we want people to use it wisely. That’s why we produced the Creation Survival Guide. This is mainly a list of things both to do and not to do, so students won’t needlessly put a big target on their backs. It also has testimonies of creation scientists, and others who experienced hostility and how they handled it.

This has wider application. Christians also work honorably in offices and in trades. Actual and perceived bias is likely not as strong as in the universities, but it still exists. Meanwhile, Jesus said that His followers should be “the salt … ” and “the light of the world” (Matthew 5:13–15).

Salt in His day was mainly a preservative, retarding decay—we are supposed to act against moral decay. The light is our ongoing witness, in word and deed, to the reality of Christ in us. Ultimately our light is a reflection of Jesus who is the true “light of the world” (John 1:4–9, 8:12, 9:5). Furthermore, a light can help spot danger and direct us to safety, as with a lighthouse or car headlights.

We can be better salt and light by following these biblical commands that complement each other so well:

These two commands are among the main driving forces for our ministry. We want others to be equipped to be salt and light. Often it can be as simple as leaving a Creation mag in the workplace or buying gift subs for college aged students. And there are plenty of other resources.

But when anyone asks me, “What should I buy for my family member or friend?” my answer is, “Whatever you will read or watch first”! It reminds me of the airplane instructions of what to do if oxygen masks appear: put your own on first, so you will be equipped to help others. 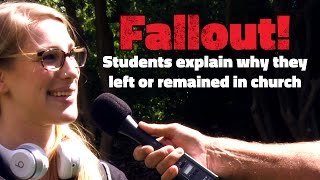 Busting Myths
by J Sarfati & G Bates, edited
US $10.00
Soft Cover
The Christian Roots of Science
US $10.00
DVD
The Creation Survival Guide
by Paul Price and Gary Bates
US $4.00
Soft Cover
Fallout! Students explain why they left or remained in church - Sleeved DVD
US $2.00
Sleeved DVD