Many creatures make their own light from a chemical process. Called bioluminescence, it occurs in a variety of organisms: insects, centipedes and millipedes, a snail, earthworms, echinoderms, fungi, fish, squid, as well as some microbes.

Bioluminescence requires a light-emitting pigment, known as a luciferin; the chemical reaction that turns energy into light is aided by an enzyme called luciferase (Latin lucifer, ‘light-bearer’). It is sometimes called ‘cold light’, because the efficiency with which this process turns chemical energy into light rather than wasting it as heat is extremely high; around 40%,1 some 20 times higher than an incandescent light bulb, and higher than the best fluorescent and LED bulbs.

Marine organisms alone exhibit more than four types of luciferin. Many of these creatures emit blue light which travels farther in water than the green light of fireflies, for example. The enzyme involved varies in structure between species even within the same phylum, and the variants show little correspondence with one another.2 This lack of similarity makes it impossible to establish a plausible common evolutionary origin for bioluminescence. Bioluminescence is therefore said to have arisen at least 40–50 times in evolutionary history.2

Some bioluminescent creatures cannot produce their own light, but rely on others to do the job; several genera of squid use bacteria to produce their light, in a mutually beneficial co-living arrangement (symbiosis). The squid somehow monitors the performance of the bacteria, and strains that fail to produce enough light are rejected by a yet unknown mechanism. In some of these squid, the presence of bacteria causes the development of the light-producing organ.

The rest of the squid genera, though, make their own light, using a luciferin along with their individual luciferase enzyme.2 This divergence within one group defies easy evolutionary explanations.

Some ocean predators (e.g. certain fish) are bioluminescent, but are unable to produce a luciferin themselves. They have all the needed organs and enzymes, but have to get the luciferin by feeding on marine organisms that do have it—which are often not themselves able to use or produce light!

Bioluminescence has many uses: mating, distracting prey or predators, luring prey, and communication. In some cases the use is unknown.

Evolutionists must assume that all features they observe must serve (or have served) some survival purpose. So bioluminescence in some mushrooms is a mystery. Only three fungal lineages glow (Omphalotus, Armillaria and Mycenoid species), and the intensity of the light they give out varies between species.3 Although some mushrooms apparently attract insects with their glow in order to spread their spores,4 this does not seem to be so in others. In species where the fibrous, nutrient-gathering mycelium (not the spore-bearing parts) glows, insects might even do more harm than good by eating these parts.3 Of course, God may have put features into creation with no other purpose than being ornamental, or showcasing His creativity.5

Interestingly, some creatures use bioluminescence for counter-illumination. To disguise their shadow against light coming from above, some marine organisms use bioluminescence on their bellies to continuously match the ever-changing light intensity and colour. Evolutionists have not explained how such complex features could have developed gradually. An incomplete, poorly controlled predecessor of the mechanism would have provided little protection against predators. It would likely even have caused easier detection (e.g. when glowing at night before the organism developed a mechanism to reduce light emission effectively, or glowing the wrong colour, thus rendering the organism more visible).

The best-known bioluminescent animals are fireflies or lightning bugs (Lampyridae). These beetles use specific light pulse patterns to communicate and locate their mates. The delay after the male’s last flash and the beginning of the female’s response is precisely timed, and is species-specific, so courtship is disrupted when this timing is off.6 Some female fireflies can imitate the patterns of other firefly species and will then attract males of these species—to prey on them!7 Sometimes, they will coordinate their light pulses while flying, leading to a spectacular display of precisely synchronized light flashes.

The patterns of occurrence cause evolutionists to propose that bioluminescence evolved at least three times in fireflies. Supposedly, the larvae glowed first (as a deterrent to indicate bad taste and toxicity of the larvae) and the adults only retained the glow later. Subsequently, the glow transitioned from its function as a deterrent to its function in mating.6 But the development of communication codes, such as the male/female communication in fireflies or light-based communication in fish,8 seems impossible to explain by evolution. Both a code generation and interpretation system must exist simultaneously in the male and female in order to improve mating and so give a selective advantage.

Evolutionists assume that it is ‘easy’ to evolve the capacity for bioluminescence, based on their assumption that the phenomenon has evolved in parallel so frequently. “The ingredients are usually not hard to come by. Stand in the dark, mix some egg white with oxygen and luciferin from, say, a jellyfish, and you’ll probably get a flicker of blue light,” suggests a recent article in National Geographic.9

But the deeper question is, how did any such mechanism come about on its own? Bioluminescence involves both an enzyme and a luciferin, plus a control mechanism integrated with an organism’s nervous system, as well as genetic information to control both the development and the operation of light-emitting organs. Evolutionists have not plausibly explained how this extremely complex mechanism could emerge in a step-wise process, since each stage would have to be fully functional in order to be preserved by natural selection. Even relying on already-existing enzymes (the evolutionary origin of which is usually taken for granted) that then become part of some entirely new apparatus is a mind-boggling challenge for evolutionists to explain.

Because of their preexisting belief in the evolutionary story, evolutionists assert that bioluminescence came into existence independently dozens of times, over a long geological timeframe, in completely different phyla and under very different circumstances, yet leading to similar light-generation mechanisms, i.e. ‘convergence’. This is in effect an admission that it is not possible to reconstruct any coherent evolutionary history for it. And all explanations to date (including ones not discussed here) fall well short of a plausible account as to how such complex and varied mechanisms could have arisen through chance mutation and selection.

Rather, it is consistent with the evidence to hold that these features were specially created, part of the original design of many species—some of which may have subsequently lost such abilities. The astonishing breadth of variation within bioluminescence mechanisms is a testimony to the creativity of the Creator, and is intentional, rather than incidental.

The most prominent hypothesis about how bioluminescence evolved supposes that after photosynthesis arrived and led to increasing amounts of oxygen in the atmosphere, the strongly antioxidant oxygenase-luciferin complex was a way to cope with this, and luminescence was merely incidental at first. Only after the ability to see also evolved, did other uses for the pigment become available.1

But organisms possess many other antioxidants, so why is a process that produces light at high energy expense still around today? Or how could organisms survive that did not have these very strong antioxidants? Moreover, experiments have shown that a rededication of an enzyme to another purpose by evolutionary processes is non-feasible.2

Even some evolutionists find problems with this explanation: “… for two groups, the fungi and the cypridinids, the oxygen requirements of their bioluminescent systems are known to be high, indicative of an origin at [oxygen] levels corresponding to present-day values, thus unlike the bacteria and fireflies. So we must conclude that if some luciferases originated as a mechanism for oxygen detoxification, the evidence indicates that this was not so for all.”3

The alternative proposed is that another type of enzyme, a ligase (which bonds two big molecules together), has evolved to become a luciferase.4 Yet even researchers supportive of the idea admit: “How the new oxygenase luminogenic function originated from AMP-ligases leading to luciferases is one of the most challenging mysteries of bioluminescence.”4 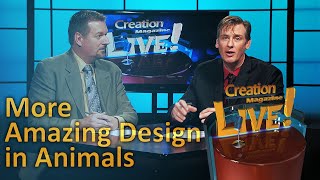