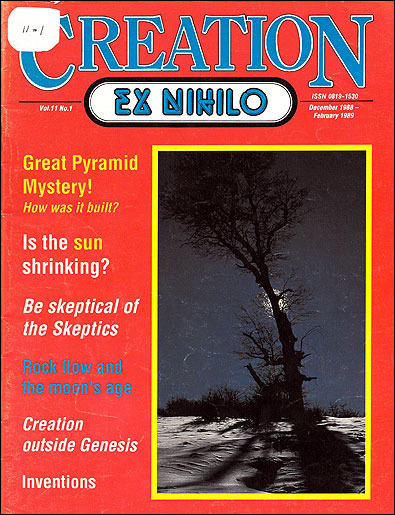 Rivers flow downhill. Heat flows from a hot area to a cooler area. Clothes and shoes wear out, and buildings crumble if not maintained. Every adult is familiar with these physical processes, which scientists see as instances of what is known as the second law of thermodynamics. Creationists argue that evolution requires exactly the opposite of this general principle of natural degeneration. So it is of some significance to consider the question: CAN WATER FLOW UPHILL?

We can take the term ‘uphill’ to mean the opposite of the spontaneous direction. If we see an instance where heat is flowing from a colder area to a hotter area we call that an ‘uphill’ process, because the spontaneous thing is for heat to flow the other way. Similarly in chemical reactions, If we burn hydrogen in air, and end up with water vapour as the combustion product, we have witnessed a ‘downhill’ reaction. But if we want to produce hydrogen and oxygen from water we are considering an ‘uphill’ reaction, which will not take place without a considerable amount of energy input.

Now, can an ‘uphill’ process ever occur spontaneously? Expressing this question in the simplest terms we might ask: ‘Can water flow uphill?’ The answer seems to be ‘Yes’. There is a device called a hydraulic ram, which causes water to flow uphill with no outside influences except the actual flow of water.

This device was apparently developed in Britain and put into operation during the late 1700s. Its construction is very simple, as shown in the figure. Its only moving parts are a spring-loaded ‘clack’ valve and a non-return flap valve. Water from the reservoir (R) flows down the inlet pipe (I) and out the discharge (D), until the flow rate is such as to force the ‘clack’ valve (C) to shut. The resulting pressure surge forces a small amount of water past the flap valve (F), thereby compressing the air (A) in the pressure tank. The pressure surge quickly terminates, and the flap valve closes. Then the air (A) expands, forcing water up the standpipe, and into the elevated tank (E).

How much water could be expected to flow uphill in this process? Suppose we had a flow of 12 kilograms of water per hour available; that there was a five-metre head between the reservoir and the discharge, and that we wanted to lift the water a height of 25 metres. The best flow we could expect would be two kilos of water per hour: Potential energy is given by the formula PE = mgh, so assuming that there is a zero overall energy change in the system, we can say that the energy lost by the water flowing to the discharge equals the energy gained by the water flowing into the elevated tank, thus:

This would represent the ideal situation. We would actually expect to get considerably less flow because of various inefficiencies. The ‘uphill’ process will only occur if it is forced by a greater ‘downhill’ process.

Our domestic refrigerator is also a device which causes an ‘uphill’ process. Heat is caused to flow from a colder area to a warmer area. If we assume that the electricity to power our refrigerator is generated from a coal-fired power station, it is possible to analyse the total system from a thermodynamic point of view. The thermodynamics are rather more complex for the refrigerator than for the hydraulic ram, but the result will be that the ‘uphill’ effect inside our refrigerator is again less than the ‘downhill’ effect measured at the power generating station. Again the overall tendency is ‘downhill’.

But what has all this got to do with the creation/evolution issue? It is in fact relevant in two areas.

Scientists are working hard to show that living things function according to known physical laws. It is a long way off until this is proved conclusively because of the incredible complexity of living organisms. When they succeed, they will sell this to the public as proof of evolution. But they are in fact confusing two different questions:

So with living things. An affirmative answer to the first question in no way implies the same answer to the second. Just take note how these two questions are confused (perhaps deliberately) in popular scientific writings.

Hydraulic Ram as an Analogy for Evolution

One scientist1 is quoting the hydraulic ram as a means of explaining evolution thus:

However, this idea makes no sense. But for the intervention of intelligence in the situation, ALL the water could run from the reservoir down to the discharge which is what we normally observe.

This scientist might as well suggest that by virtue of the fact that millions of motor vehicles are worn out each year in the world, there must be a smaller number of more sophisticated vehicles somewhere being created by purely natural processes. The argument is completely illogical as there is no coupling between the ‘downhill’ process and the proposed ‘uphill’ one. He correctly states earlier that ‘an uphill or backwards process can spontaneously occur in nature by being somehow coupled to a more dominant downhill process. By virtue of the coupling, the downhill process can actually drive the other process "backward" or in the so-called uphill direction’.2 Intelligence is needed to work out some means of coupling the ‘downhill’ process to the ‘uphill’ process. If someone could figure out a way to do this in the case of motor vehicles, he would be an instant millionaire.

Let us state clearly that the origin and/or development of life was definitely an ‘uphill’ process. However, many people are confused on the issue. We talk about thermodynamics which is to do with energy; we did an energy balance in the case of the hydraulic ram, and looked at the energy situation with respect to forcing a chemical reaction to proceed ‘uphill’. And the trap people fall into is thinking that all that is required for evolution to occur is the input of energy into the system. Nothing could be further from the truth. The vital component is for INFORMATION (i.e. organization) to be added to the system.

It is legitimate to compare the situation with a tornado hitting a car-wrecker’s yard and causing the construction of a passenger jet-liner. We know such things can only happen in cartoons. The necessary ‘uphill’ effect is the fashioning of turbine blades and aluminium panels of exactly the right functional shape; and then the assembly of the many thousands of components in exactly the right relationship to each other to achieve the required function. The natural ‘downhill’ process for motor vehicles is that the doors rust out, the seals cease to seal, the tread wears off the tyres, etc. But we would certainly be looking at an ‘uphill’ process if our VW somehow developed into a passenger jet, with all the additional complexity involved.

Nobody has ever suggested a means whereby a loss of organizational information from one organism could be used to add genetic information to another organism, so the hydraulic ram analogy for evolution is nonsense. The creationist argument stands, that living things represent a miraculous ‘uphill’ process.