Artwork, issues, and life through the eyes of staff cartoonist Dan Lietha

by Steve Cardno and Carl Wieland

Effective communication. That’s how staff artist Dan Lietha of Answers in Genesis (USA) describes his work. ‘Artwork basically is a form of communication. If there’s one thing that excites me, it’s saying something with the images that I’m creating.’ Dan’s specialty is cartooning, as evidenced in his Creation magazine contributions, children’s books and Web-based illustrations. His intent is not to trivialize or minimize Gospel and Biblical concepts, but rather to make the ideas more widely accepted by people. ‘I think this form of artwork is disarming to a lot of people who wouldn’t read an article, but will read a cartoon’, Dan says. The appeal in cartooning lies in its ability to get across ideas to a wide range of age-groups, not just children.

Dan explains: ‘Cartoons aren’t used only to communicate silly, frivolous things. Editorial cartooning is probably my favourite type, and you see lots of cartoonists tackle political issues in that way, but they also deal with things like abortion, death, murders and bombings. Cartoons are made to make some very, very serious statements concerning those things. A Christian who is a cartoonist can, at the same time, use that medium to communicate a salvation message or the consequences of death.’

The creation/evolution issue was one that intrigued Dan as a young Christian. He realized that what is important is that we trust the authority and truth of God’s Word first, not the evidences in the world which point to Creation. Dan’s valuable work helps to illustrate the fact that the creation/evolution issue is not just a scientific battle about evidences, but God’s authoritative Word vs man’s fallible opinion.

We asked Dan how he came to be involved with Answers in Genesis (USA). ‘When I first contacted Ken Ham, I sent him a sampling of my Creationwise comic strips. I had been listening to many different tapes by Ken, in particular about creation evangelism and the fact that the church had lost its foundation, moving away from God’s Word as truth. And my burden became very similar to Ken’s in that I wanted to help restore that in a way that I could. So I developed a little comic strip called Creationwise and produced this on a semi-regular basis.’ Dan learned that at the time he submitted his cartoons to Ken Ham, the ministry was also needing an illustrator for Ken’s second children’s book, A is for Adam. From there, Dan continued to do volunteer work for AiG as well as his usual job until a mutual decision was reached to employ him on a full-time basis.

Among Dan’s favourite work is drawing his many spectacular and often amusing overhead transparencies, which Ken Ham uses to great effect in his worldwide speaking engagements. ‘One of my favourite transparencies came out of a Creationwise cartoon that I made during the same time I was illustrating A is for Adam. I had almost no time to draw the cartoon because I had to meet the book deadline. Sometimes when your constraint is “keep it simple”, you come up with the best ideas. The drawing’s label read, “God’s perfect Word” and “Man’s fallible opinion”. 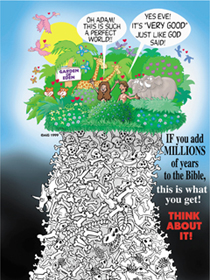 In helping Christians understand that the concept of millions of years can’t be mixed with the Bible, Dan created this now-famous cartoon (above) which has helped change so many people’s thinking on the issue. If Adam and Eve were standing on top of a world which had a history of millions of years of death and suffering before them, then how could it be called ‘very good’? And doesn’t the Bible teach that death came as the result of the sin of Adam? If so, how could there be the fossils and bones of millions of dead creatures, showing signs of struggle (and diseases like cancer), underfoot before his sin?

‘When I come up with a cartoon, there are many, many draft versions that I’ll draw before I get to that last one. And after all that effort, I know people will only look at it and read it for maybe just a few seconds and then move on.’

Dan has known he is going to Heaven when his earthly life is over, ever since the day when, as a child of five, he committed his life to Christ as his Saviour at a Wednesday-night church meeting his parents were attending. Today, with a love for dinosaurs, God’s Word and his own unique brand of illustrating, Dan feels that his job at Answers in Genesis is ‘tailor-made’ for him.

His advice to young people interested in pursuing a career in Christian art is to ‘practise, practise, practise.’ To be a professional at what you do, ‘you have to be good at it’, Dan points out. ‘Hone those skills that the Lord has blessed you with and also find artists that you like and try to learn from what they’ve done. The quality of Christian art is going up and artwork is a way of communication, so it not only needs to be good, but the Christian foundation that you work from needs to be excellent also.’

Dan has drawn influence and encouragement from other artists as he has developed his own style. Charles Shultz, who was responsible for the famous ‘Peanuts’ comic strip, and Johnny Hart,1 who produces the internationally syndicated ‘B.C.’, have both been artists (and also Christians) whom Dan has admired.

Dan mentioned the valuable contribution and encouragement his supportive wife Marcia gives him during all the hours he puts in to help make the AiG ministry what it is today. And together with Stacia Byers’ writing, Creation magazine’s special ‘Answers for Kids’ section has an appeal for all ages in its colourful and informative presentation. Creation magazine and Answers in Genesis/Creation Ministries International appreciate the work of Dan Lietha, as do the thousands around the world who enjoy his entertaining and thought-provoking artwork.

Update, May 2020: Dan is now employed with Reasons for Hope as an illustrator and speaker.