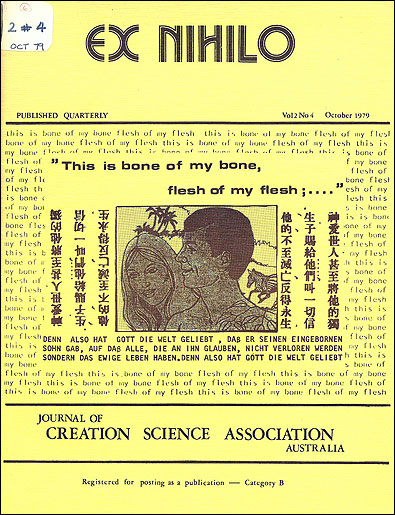 A number of years ago a film called ‘Catch 22’ did the rounds of the theaters. It was about bomber crews during World War II, and I guess its purpose was to emphasize the insanity of war. In the film there was a rule that the only way a member of a bombing crew could get out of flying on bombing raids was to prove that he was insane. Catch 22? If a person tried to act insane, he was obviously trying to get out of the bombing raids, which is what anyone in his right mind would do. Therefore anyone acting insane was classified perfectly sane. It was impossible for anyone to get out of the bombing raids because of Catch 22. Catch 22 was a circular argument which was impossible to break.

In a similar way, evolution often presents us with a Catch 22, the belief that the physical characteristics essential for the survival of animals arose by mutation and were fine-tuned by natural selection: The catch?—if these animals require these characteristics for survival, how did these animals survive over the millions of years that it must have taken them to evolve to a point where they could survive?

An interesting exercise is to select a believed primary survival characteristic of a certain animal, and try to reason through how it could have survived while it was evolving that characteristic. Some examples would be the development of the wing of birds, the necks of giraffes, the quills of echnidas, or any other limbs, organs or abilities which it is claimed have evolved to enable those creatures to survive.

I have selected the incredible ‘aiming ability’ of the Archer fish to illustrate the point in detail.

The archer fish, or as an ichthyologist would say, Toxotes chatareus, is an unusual fish with a unique ability. It can squirt a tiny jet of water at an object (insect or fruit) on an overhanging tree branch, causing it to fall into the water where it is devoured by the fish. The Archer fish is apparently perfectly suited to this task. The form of its body from the tip of its snout along the nape to the commencement of the dorsal fin is almost a straight line. This enables the fish to lie at an angle at the surface with the mouth directed upwards and no part of its body showing. Its mouth contains a groove which runs along its roof, and when the tongue is pressed against it a narrow tube is formed. Rapid closing of the gill flaps provides the pressure to eject the water.

The first question we must ask is 'Is this characteristic necessary for survival?' The interesting answer is ‘not really’. The present archer fish is not entirely dependent upon its ability to shoot down insects. It is omnivorous, feeding not only on insects, but on small fish and sometimes even berries. It is quite possible to catch them with baits in Northern Queensland waters. This raised the fascinating problem as to what Toxotes Chatereus is doing with a characteristic which it is claimed has evolved out of necessity, which is perhaps a luxury extra. In evolutionary theory why did this fish acquire this unique ability? The answer most probably would be that food supplies ran low and they developed this ability out of necessity. While this is an easy answer, it does not solve the question, ‘How did they survive over the many years that they must have needed to physically evolve to their present state, and by what mechanism did the fish develop such a unique set of structures and functions?’ The present evolutionary theory does not and cannot provide answers to these questions.

By way of example, can you imagine those transitional years with fish rising to the surface and wildly spraying water all over the place in an endeavor to shoot down an insect or a berry? Without the properly shaped mouth, there is no way that the fish could squirt a narrow jet of water to knock down an insect over a meter away.

The present Archer fish can shoot with surprising accuracy, and this brings us to another question ‘How did they acquire this accuracy?’ When an Archer fish shoots, its eyes remain under the water, which means that due to refraction (the bending of light in water), the image it sees is not actually the position of the insect, unless it happens to view the insect at the angle of 90° to the surface of the water. To be able to aim at the position of the insect, the fish would have to make some sort of mental adjustment. But the sort of adjustment it would have to make is not simple.

It is interesting to speculate as to whether the Archer fish does or does not know the mathematics of Snell's law. But he certainly does know where to aim!

I believe that evolution would be far more convincing if there were examples of animals which are not suited to their environment. However, by virtue of definition, such animals could not survive. The fact that animals are suited to their environment fits perfectly into the Creation model, that God deliberately made the original animal kinds to cope, and any variations since that time have been minor.

To recognize that there are variations within the different ‘kinds’ of animals is quite reasonable, but to extrapolate these observations to try to establish that all animals have a common ancestor raises many problems, including this Catch 22. I personally believe that the biblical Creation account is the most reasonable basis for interpretation of the observed information.