In the seemingly endless bombardment of ‘human evolution’ propaganda, the latest headlines to grab attention boast: ‘Fossil connects human evolution dots’,1 and ‘Fossils fill gap in human lineage’.2 The above headlines are in response to a paper recently published in Nature3 about allegedly 4.1 to 4.2 million-years-old Australopithecus anamensis fossils. These were discovered in the Middle Awash region of Ethiopia, with the first author being well-known paleoanthropologist Tim D. White, who is associated with a series of grand claims based on scant evidence.4,5 Readers anticipating a ‘jaw-dropping’ find with the new claims will also find that the latest fossil scraps on offer will disappoint. 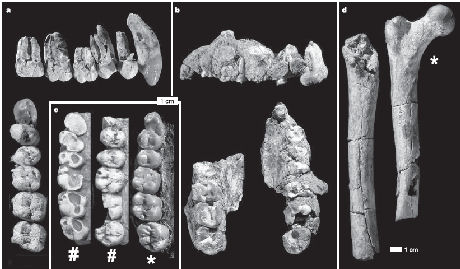 This is the main body of evidence that caused all the ‘evolutionary excitement’. The fossils in the picture comprise six teeth (a), a fragmented maxilla with dentition (b) and part of a right femur (d). Those marked with * are of Australopithecus afarensis, and those marked # are of A. anamensis for comparison. The maxilla (b) was found 10 km from the other fossils. From Nature.3 [* and # added]

They found a femur and some craniodental remains (pieces of skulls, and some teeth) belonging to at least eight individuals, with the finds coming from two locations about 10 km apart.6 White and colleagues claim that ‘the 4.1-million-year-old fossils were anatomically intermediate between the earlier species Ardipithecus ramidus and the later species Australopithecus afarensis, the Lucy family’.7 However, it is not so much the anatomy, but more the timing—that is, they have found something dated between Ardipithecus ramidus and Australopithecis afarensis finds, and so to them this makes the fossils by definition ‘intermediates’ between the two species. It is all based on the assumption of evolution and the alleged age-date of the fossil. It is in fact difficult to see how anyone can argue on the basis of the morphology of the fossil scraps themselves that they are a link between afarensis and ramidus.

It is important to note that some evolutionists have attributed earlier finds of anamensis to the existing species afarensis,8 and the simplest explanation may be that the latest finds labelled anamensis simply represent within-species variation of afarensis.

Probably the most significant find by the researchers is the Asa Issie right femoral shaft (ASI-VP-5/154), which they characterize as being morphologically similar to the left proximal femur of AL 288-1 (Lucy).9 They later refer to a character of the Asa Issie femur (the ‘minimal linea aspera’—related to the distance between ridges of the adductor attachments at the shaft’s midpoint) as being ‘on the presumably primitive end of the considerable range of variation in Au. afarensis’.10 Of course, the applicability of the word ‘primitive’ is assumed, not proved. But notice that in this statement is an admission that this bone indeed falls within the afarensis range.

Another fossil piece, a maxilla with dentition (ARA-VP-14/1) is said to be ‘slightly smaller but anatomically similar in preserved parts to the KNM-KP (Kenya National Museums, Kanapoi site) 29283 Au. anamensis paratype’.9 The authors also discuss enamel thickness and state that the molar enamel thicknesses of the new specimens were comparable to previous anamensis specimens, and also that the enamel thickness of anamensis was close to that of afarensis in some regions.10 However, in terms of comparison to other alleged species, such as afarensis and ramidus, one cannot read too much into any differences given that, as the authors indicate, ‘considerable within-species variation is currently being documented in modern human and ape control samples’.10

It was in 1995 that dental, cranial and postcranial specimens from two separate localities in Kenya, dated from about 3.8 to 4.2 million years ago, were announced as belonging to a new hominid species Australopithecus anamensis.11 Most of the fossil scraps undoubtedly came from an ape, such as the chimp-like jaws, but controversy has surrounded the allegedly more human-like nature of the tibia and humerus.12 The anamensis humerus lacks a deep, oval hollow, used as a locking mechanism between the humerus and ulna, which is present in chimpanzees, but not in humans. And the anamensis tibia is wide, as in humans, because of extra spongy tissue, which acts as a shock absorber during bipedal locomotion.13

At the time of publication, paleontologist Peter Andrews suggested that the tibia and humerus, coming from different sections (upper level) of the Kanapoi locality strata than the ‘primitive’ jaws and teeth (lower level), might possibly ‘be related to humans and the other to apes’.14 There were some mandible fragments (KNM-KP 29287) found in upper level strata, but these were from a different (higher) level than the tibia (KNM-KP 29285) and humerus (KNM-KP 271).15 At the time there was also the problem of several hundred thousand years in evolutionary time between the upper and lower levels, but in a later paper further ‘dates’ were obtained that narrowed the time gap.16

In this later article additional finds of fossil scraps from anamensis were reported, but no additional evidence was provided to associate them with the tibia and humerus. Also, the 2000 analysis of a fossil radius (KNM-ER 20419) from the other anamensis location, Allia Bay, indicated ‘specialized wrist morphology associated with knuckle-walking’.17

In a paper co-authored by Meave Leakey, anamensis is said to be very like afarensis postcranially, with the humerus, tibia, and radius ‘almost exactly matched in size and morphology to the A. afarensis collections from Hadar’.18 Now that you have a femur which is also morphologically similar to afarensis, the argument is strong that afarensis and anamensis are the same species. In any case, at most you have an ape-like creature with a similar locomotion pattern to the ape-like afarensis. Some of these apes may indeed have had limited ability for non-human bipedal locomotion, but the morphology of creatures such as afarensis also indicates they were specialized for climbing in trees, as well as knuckle-walking, as must have been anamensis.19

Nothing has emerged from this recent discovery that is inconsistent with the notion that this is just one more member of the group of extinct ape-like primates known as australopithecines, and that it is possibly even the same species as the famous ‘Lucy’. As has been demonstrated by top-level evolutionist anatomist Dr Charles Oxnard,20 the evidence has always strongly supported the idea that the australopithecines were not on any line leading to humans, even for those who accept this possibility. See ‘Lucy’ isn’t the ‘Missing Link’!

Peter Line’s undergraduate major was in biophysics. After that he completed a masters degree and a Ph.D., both in the area of neuroscience. He has had a keen interest in the creation/evolution issue ever since becoming a Christian, as evolution was a stumbling block to him believing God’s Word was true. Return to top.