Could the mammalian middle ear have evolved … twice?

The middle ear of the cat (a mammal) has three tiny bones in it for precision transmission of sound that are supposed to have evolved from three bones in the jaw of a reptile (same class as the chameleon).

The amazingly complex middle ear of mammals has three bones—the incus, malleus and stapes, popularly known as the hammer, anvil and stirrup—while reptiles have only one. Because of its complexity, evolutionary theorists have long said it must have originated once only, in some ancestral creature from which all mammals today are descended. As an article in New Scientist put it: ‘The process was so complex that mammal experts assumed that it must have occurred only once, before monotremes split off from the other mammals more than 150 million years ago.’1

It requires blind faith to believe that things ‘so complex’ could have evolved once, let alone twice or more.

That’s not surprising. Consider the remarkable transformation that evolutionists maintain took place: three jawbones of the ancestor reptile somehow gradually migrated over generations (while the jaw kept being useful for chewing) to eventually become the three bones that transmit sound in the mammalian ear.

So it’s hard enough to conceive of such an amazing series of events taking place once, let alone twice. But the discovery2 of a ‘115-million-year-old fossil of a tiny egg-laying mammal thought to be related to the platypus provides compelling evidence of multiple origins of acute hearing in humans and other mammals.’3 This raises the problem: ‘How can this supposedly rare and unexpected evolutionary change have occurred so commonly in early mammals?’3 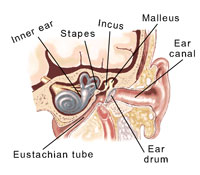 In the various reports and commentary spawned by this fossil, no clear evolutionary mechanism is proposed, except to describe it as ‘a remarkable example of homoplastic evolution’ [another term for convergent evolution—the supposed independent evolution of similar structures].2,4

In other words, as New Scientist reports, evolution ‘invented’ the mammalian middle ear twice: ‘The advantages of the middle ear are so great it was inevitable it should evolve twice in two groups with similar constraints.’1

This is yet another example of the contortions evolutionists have to go through to try to make the fossils (which are not millions of years old but, in reality, largely a legacy of the Flood, only 4,500 years ago) fit with evolutionary theory. It requires blind faith to believe that things ‘so complex’ could have evolved once, let alone twice or more. And why would natural selection even bother? Reptiles hear quite well. (See Dr David Menton’s DVD presentation ‘The Hearing Ear and the Seeing Eye’, available from our online bookstore.)