by Frans Gunnink and Philip Bell

Should children be given information on the different views about the origin of the universe? According to the Dutch Parliament, they should not. It might come as a surprise, then, that the Dutch Minister of Education, Maria van der Hoeven (pictured left), has a different view. In March (in her personal weblog), she remarked that she was personally attracted to the concept of Intelligent Design (ID) in relation to science education. Van der Hoeven, an active Roman Catholic who is well known for her practical approach to the problems confronting education in the Netherlands, said that she didn’t believe in ‘coincidence’1—she clearly rejects atheistic naturalism. Furthermore, she states: ‘When we succeed in joining scientists of different directions of faith, maybe Intelligent Design might at the end be applied at schools and in lessons.’2 These purely private remarks caused parliamentarians at that time to question her view on the separation of Church and State.

More recently, Van der Hoeven was interviewed by a national newspaper, De Volkskrant, and fuelled the controversy by saying that she hopes for a serious debate between supporters and opponents of the theory of evolution. While trying to allay fears that ID would be forced into the science curriculum and thus onto schools, she pointed to the often-hostile reaction towards what are deemed to be religious opinions. She said that ‘one has to acknowledge that the theory of evolution is not complete and that all the time we still discover new things. Do I have to have an opinion on this, as minister? No. But one has to have eyes and ears for the different opinions. I find it important that scientists speak about it, without directly starting to debate from their own [unsubstantiated] opinion.’3 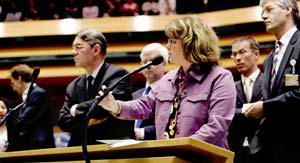 Margot Kraneveldt, Dutch Member of Parliament, cynically asks Dutch Minister of Education Maria van der Hoeven if she would not consider changing the name of her title to Minister of Education and Pseudo-Science. On her right hand side, Jan de Vries and Arie Slob are waiting to speak in defence of the Minister.

This willingness to consider the evidence for and against competing theories of origins is commendable, although [our ministry] is not quite on the same wavelength4 in a number of ways—for instance, the ID Movement tends to dodge the question of who/what is the Intelligent Designer? Nevertheless, in spite of this rational appeal for reasoned debate about the issues, the minister’s comments sparked a media blaze, with many commentators denouncing Van der Hoeven and one saying that she was ‘taking five steps back in time’. Hans Roskam, an evolutionary biologist at Leiden University, claimed: ‘All arguments of creationists and intelligent designers have been debunked by facts in science, one by one. That the Minister has been won over by [a] crafty creationist to have that debate again, I consider a disgrace. There should be a clear separation between church and state.’ The furore culminated in a heated Parliamentary debate, in which all non-Christian parties (in an unusual show of unity!) called for the minister to give account. One politician, Margot Kraneveldt, asked the Minister if she would now change her job title to Minister of Education and Pseudo-sciences! However, the Prime Minister of the Netherlands, Jan Peter Balkenende (a professing Christian) gave his firm support to his Minister of Education, while pointing out that he had no intention of seeking to remove evolution from the textbooks. 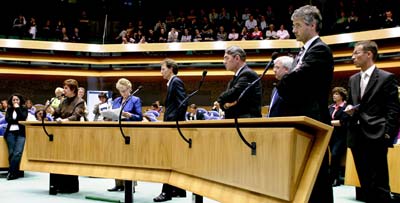 Members of Parliament in The Hague waiting for their turn to either fire critical questions towards Minister of Education Maria van der Hoeven, or wanting to support her. On the far right, Arie Slob and Jan de Vries, who said they were surprised by the fierce tone of the opponents towards a creation-friendly view.

Of course, the irrational prejudice (seen in this debate) against any view that contains the vaguest whiff of a creation worldview is nothing new. But it’s intriguing—and rather ironic—to see such antipathy among the notoriously ‘tolerant Dutch’. As one writer has said, these days tolerance is defined as: ‘all values, all beliefs, all lifestyles, all truth claims are equal.’5 In practice then, the truth claims of Christianity (e.g. John 14:6)—intolerant as they are of other views—cannot be tolerated! But, as Jonathan Sarfati put it: ‘The result is extreme intolerance towards Christianity from people who talk so much about tolerating all views. In short, they are intolerant of intolerance, so logically they should be intolerant of themselves!’6 Jan de Vries, a representative of Van der Hoeven’s own Christian-Democratic party, said he was shocked by the lack of respect in the debate for people who took a creation position. Arie Slob, a member of the small evangelical Christian party ChristenUnie, put it more bluntly, stating that ‘more faith is necessary for belief in the evolutionary theory than for a belief in God as the Creator of heaven and earth’. The intensity of this parliamentary debate was also evident from the long line of representatives waiting to use the ‘interruption microphones’ (see picture)—a rare sight in the Dutch Parliament.

Certain high-profile Dutch scientists are also voicing their opinions, on both sides of the debate. Van der Hoeven’s idea for a public debate partly came about through her contact with Professor Cees Dekker, a biophysicist at Delft University. Dekker is a professing evangelical Christian and a prominent supporter of ID in the Netherlands. In 2003, he was awarded the Spinoza Prize (the most prestigious scientific award in the Netherlands). In contrast, molecular biologist Professor Ronald Plasterk is an opponent to ID and is actively voicing his opinion through media columns. However, he flatly refused van der Hoeven’s invitation to join in the debate: ‘Intelligent Design does not play any role in biology. Just imagine, it could be that a couple of Indian fakirs might turn up, saying that gravity does not exist. Should we invite the Dutch physicists from the universities to the Ministry of Education to talk about that idea?’ (Of course, this comparison is quite false: gravity can be tested in the present—by experimental science—whereas Plasterk’s evolutionary belief about the vanished past is not open to such direct testing or observation.)

Cees Dekker acknowledges that this debate strikes at the heart of people’s deepest convictions and their basic view of life. However, while openly confessing his Christian faith, he thinks that a person’s religious convictions should be kept out of this discussion. Unsurprisingly, he is not in favour of the stand that [CMI] and others take on ‘a young earth’ for instance, believing such teaching to be scientifically irresponsible. Apparently, he fears that creationism does more harm than good, albeit unintentionally. Sadly, like so many Christians today, he would rather cling to the idea of a creation of the universe over billions of years—much like advocates of ‘progressive creationism’ and other compromise views of Genesis7—even though this undermines the Christian Gospel message because of the inevitably allied belief in death and bloodshed before the Fall of humankind (Genesis 2:17; Romans 5:12).

As the heat dies down, some are concerned about the potential repercussions for education in the Netherlands. At present, teachers are supposed to draw attention to ‘alternative and former theories’ of the origin of life and the Earth. But opponents are now calling for a ban on any mention of special creation or intelligent design in biology classes, confining any treatment of these ideas to religious education. Where have we heard this before? When the Bible, the Ten Commandments and prayer were thrown out of public schools in the United States, this did not remove religion—it simply replaced it with another, substitute religion, that of humanism.