Darwinism and racism – are they linked?

In response to the book review article Does ‘race’ science refute superior humans? We received the following response (in red) interspersed with CMI’s’s comments.

Nowhere did my (LT) review state that Darwin was a prophet. However, some people do seem to treat him like one. E.g. Richard Dawkins once said: “Darwin showed us that the world is beautiful and inspiring without a God. He revealed to us the glory of life and opened our eyes to who we really are and where we’ve come from”.1 That is hardly scientific language!

You say that Darwin’s views on race are not an inherent feature of evolutionary theory. I didn’t say they were. Rather, I said that evolution provided an easy framework in which to fit a rank of races (a pre-Darwinian thought, and largely a by-product of the Atlantic slave trade). Re-read the quotation by Stephen Jay Gould in the book review article. Racism doesn’t feature as prominently today among evolutionists because it’s so ‘politically incorrect’ and the human genetic data (which we’ve only had for the last few decades) has decisively falsified its purported scientific basis. This did not come as a surprise to biblical creationists, though it was a surprise to evolutionists.

2. Darwin specifically noted, in The Descent of Man, that no trait, on which one could rest a claim of superiority or inferiority, is present in all members of one population and no members of another. His theory (and modern evolutionary theory) is hostile to the essentialism that is central to racist concepts.

This seems to misunderstand how evolution was used to justify racism. First, ‘races’ were relatively easy to distinguish observationally. Second, the cultural supremacy of ‘white’ peoples was taken as a given. Think of the effects of the Atlantic slave trade and the spread of European colonialism. Surely that showed the cultural dominance of European ‘whites’, right? Certainly that’s how people thought back then.

How did evolution contribute? It provided a biological explanation for this ‘data’: some populations evolve faster than others and thus outcompete other populations. Transpose this to human races, and it was easy to think that evolution demonstrated that the cultural supremacy of European ‘whites’ had a biological basis—‘whites’ evolved faster than ‘non-whites’. Evolutionary scientists of the late 19th and early 20th centuries then went looking for the specific traits that marked out the ‘white’ race as superior. Of course, we all know they didn’t find any. But since evolutionary racism was never founded on finding such traits, it wasn’t heavily undermined by not finding such traits.

And yes, this sort of thinking is found in Darwin. See Missing the link between Darwin and racism. Here is a quote from The Descent of Man:

“At some future period, not very distant as measured by centuries, the civilised races of man will almost certainly exterminate, and replace, the savage races throughout the world. At the same time the anthropomorphous apes … will no doubt be exterminated. The break between man and his nearest allies will then be wider, for it will intervene between man in a more civilised state, as we may hope, even than the Caucasian, and some ape as low as a baboon, instead of as now between the negro or Australian [i.e. Aboriginal] and the gorilla [emphases added]”.2

3. Regarding deep time: yes, evolutionists think that the human species has had a quarter-million years or so to diverge since its beginning, vs. the 4500 years or so (since Noah’s Flood) that you allow. But you hold that, e.g. Indian and African elephants have diverged into separate species in the same time, so why is “deep time” and slow evolution more friendly to racism than young-Earth creationism and hyper-fast speciation within “kinds?”

The non-human example you give isn’t ‘racist’ in either biblical or evolutionary terms because it lacks any notion of rank. Divergence time is also irrelevant. All the timeframe might suggest in a biblical framework is that human populations have had enough time to diversify to the point of separate populations no longer being able to interbreed. And yet we know this hasn’t happened for humans. But even if it had happened, the Bible still provides a bulwark against racism. Why? The Bible still says we’re all descended from Adam and Eve (and Noah’s family: How did all the different ‘races’ arise (from Noah’s family)?), and are thus all alike divine image bearers. This doesn’t change even if segments of humanity become reproductively isolated from others.

Evolution, however, lacks any such bulwark against racism. In other words, while evolution may not be inherently racist, it isn’t inherently anti-racist either. This is hardly surprising, since evolution is a historical scientific idea, and is amoral by itself. Still, ‘survival of the fittest’ language easily generates connotations of rank, whether one likes it or not. One ‘race’ proves ‘fitter’ than another due to their cultural/technological dominance. Is it not easy to see how that will generate notions of ‘inherent superiority’ for some races over others? And if it won’t generate them by itself, is it not easy to see how it will at least strengthen the hold such ideas have on people?

4. Before Darwin, racism was often justified invoking the supposed “curse of Ham,”or else separate creation of (unequal) races by God (pre-Adamism or co-Adamism). The reason that biological or pseudo-biological (note -- you surely would in other contexts -- that “biological” is not a synonym for “evolutionary”) arguments for racism became common was that they replaced scriptural (or pseudo-scriptural) arguments that no longer appeared viable after Darwin. Darwin noted that common human ancestry was a necessary inference from his theory.

You’re right in implying that if Scripture was read and interpreted correctly there really would not be a racism argument. The curse of Ham arguments are indeed not scriptural, and biology prior to the advent of Darwinism was mostly done in light of a Creator God. Attempts to justify racism from the Bible have always run afoul of Genesis 1–3 (as well as passages like Galatians 3:28). And this is why proponents of racism before Darwin needed to rely on ideas outside the Bible, like Aristotle’s view of slaves, or the Great Chain of Being idea, or Europe’s technological/scientific superiority, to justify their racism. Evolution proved an effective tool for justifying racism (and its worst abuses). While racism has sadly marred some churches (not least in the US), it was/is entirely inconsistent with the teaching of Christianity.

For more details, please see our Racism Q and A page and our resource One Human Family. 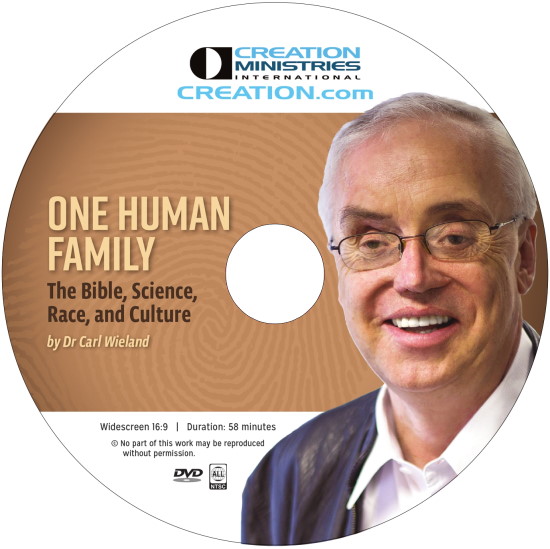