Online premiere of Dismantled: A Scientific Deconstruction of the Theory of Evolution
Watch for free here between 12 AM October 9th - 11:59 PM October 11th EDT!

All living organisms contain literally encyclopedic quantities of complex, specific information. To store this information, living things have by far the most compact information storage/retrieval system known: the nucleic acid/protein system. The master blueprint or recipe is coded on enormous molecules of DNA (deoxyribonucleic acid).1 A codon, or sequence of three of the four types of DNA ‘letters’ (nucleotides), codes for one of the 20 types of protein ‘letters’ (amino acids). A gene is defined as a sequence of nucleotides coding for a single protein, or a subunit of a multicomponent protein. Even the smallest known genome of any free-living organism, Mycoplasma genitalium, contains 482 genes comprising 580,000 nucleotides.2

The decoding (translation) requires many components, including complex editing machinery to correct errors. But the famous philosopher of science, Sir Karl Popper (1902–1994), pointed out:

‘…the machinery by which the cell (at least the non-primitive cell, which is the only one we know) translates the code consists of at least fifty macromolecular components which are themselves coded in the DNA. Thus the code can not be translated except by using certain products of its translation. This constitutes a baffling circle; a really vicious circle, it seems, for any attempt to form a model or theory of the genesis of the genetic code.’3

The obvious conclusion is that the decoding must have been functional from the beginning, otherwise life could not exist.

One of the many types of molecules needed are the transfer ribonucleic acid (tRNA) molecules. These are the molecules which link the right amino acid with the right codon. They comprise about 80 nucleotide ‘letters’, three of which are called the anticodon. The anticodon links to the corresponding codon on the messenger RNA (mRNA), which in turn has relayed the correct code from the DNA. Thus the tRNAs can transfer the right amino acids to the right place in the growing peptide chain, as coded in the mRNA.4 Also, the amino acid is bonded to the tRNA in such a way as to be activated, i.e. to have a high chemical potential—this is necessary so it will form a peptide bond to the adjacent amino acid in the polypeptide. Free amino acids have almost no tendency to form polypeptides by themselves; rather, the tendency is for the reverse to happen.5

There are also enormous chemical hurdles for any evolutionary explanation of the origin of nucleic acids from a hypothetical primordial soup.6,7 And even if we granted that RNA could form spontaneously, there is a huge hurdle in linking the right amino acid to the right anticodon by naturalistic means. If the links are not correct, the entire decoding machinery would decode the wrong message, or no message at all, meaning that the organism could not manufacture vital enzymes. However, there is no chemical reason for any particular anticodon to link to any particular amino acid. In fact, they are at the opposite ends of the tRNAs, precluding any chemical interaction. Again, they must have been fully functional from the beginning.

Living organisms do not, and could not, rely on random chemistry to synthesize the tRNAs. Rather, the right amino acid is activated and linked in two steps to the right tRNA by aminoacyl-tRNA synthetases (aaRSs).8 First, chemical energy is supplied by adenosine triphosphate (ATP), which was formed elsewhere by ATP synthase, an enzyme containing a miniature rotary motor, F1-ATPase.9,10,11,12 ATP reacts with the amino acid to form a mixed carboxylic-phosphoric anhydride.13 Secondly, the aminoacyl group forms an ester with the 3’-hydroxyl of the ribose in the terminal adenosine of the tRNA.8,13

However, these steps are not enough to ensure the required high decoding fidelity (error rates of 1/2400 to 1/40,000). The aaRSs also edit the final products to make sure that the right amino acid is linked to the right tRNA. One difficulty is discriminating between chemically similar amino acids. In particular, L-valine (Val) and L-isoleucine (Ile) differ by only one methylene (CH2) group. Double Nobel laureate Linus Pauling (1901–1994), calculated that since the CH2 group has a hydrophobic binding energy of only about 4 kJ/mol, the error rate for replacing Ile with Val would be about one in five.14 So it is thermodynamically impossible for ordinary one-step recognition to achieve the error rate of 1/3,000 observed in isoleucyl-tRNA synthetase (IleRS).15,16,17,18

However, an error substituting Ile for Val can be biologically harmful or even catastrophic. Even a single Ile–Val mutation in the core of ribonuclease T1 reduces its stability because of ‘a loss of favorable packing interactions of the side chain in the folded form of the protein.’19 Such a mutation in the hydrophobic core of chymotrypsin inhibitor 2 changes the free energy of unfolding (DDGU–F) by 5.0 ± 0.4 kJ/mol on average.20 And a single Ile–Val mutation in the interior of human lysozyme results in less resistance to denaturation ((DDG from -1.5 – -5.0 kJ/mol).21 This mutation also increases susceptibility to lung cancer22 and affects Human Immunodeficiency Virus–1 drug resistance.23 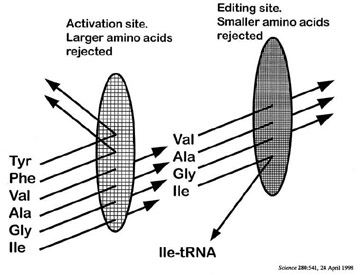 Firgure 1: The double-sieve mechanism for the isoleucyl-tRNA synthetase. Hydrolytic editing reduces the error rate for the misactivation of valine from an expected value between 1 in 10 and 1 in 100 to 1 in 40,000 (after Ferscht15).

In 1998, Nureki et al. demonstrated this double-sieve mechanism in IleRS. They used X-ray diffraction (XRD) techniques to solve the crystal structure of Thermus thermophilus IleRS, as well as its complexes with Ile and Val. IleRS is a huge L-shaped molecule measuring about 100 Å x 80 Å x 45 Å , and belongs to the space group C2.8

IleRS contains a characteristic nucleotide binding fold, the Rossmann fold, in the centre. The ‘coarse sieve’ is a cleft in the Rossmann fold with two characteristic four-amino-acid sequences that bind ATP. The cleft also binds L-Ile at the bottom — its hydrocarbon groups and the NH3+ and COO– groups are recognized by strategically placed amino acid residues of the enzyme. This site is able to exclude larger amino acids by steric hindrance, including L-leucine, although this differs from Ile only in the placement of the methyl group on the side chain. This contrasts with ordinary laboratory organic chemistry, where ‘Leucine and isoleucine are particularly difficult to separate.’25

The fine sieve is another part of the Rossmann fold, the Ins-2 structural domain, which contains another deep cleft. XRD detected Val in this cleft in the L-valine-IleRS complex, but never any Ile in the L-isoleucine-IleRS complex — the cleft is simply too small. The incorrect Val products are hydrolysed here, but the correct Ile products are protected.

Unfortunately, the brilliant paper of Nureki et al.8 was spoiled when the authors went with the common secular flow, and genuflected to the idol of today—the Unholy Trinity of Time, Chance and Natural Selection. They wrote:

‘ … it is interesting from an evolutionary viewpoint that all of the enzymes catalyzing the central steps of Ile-Val biosynthesis and metabolism do not distinguish, or can neglect the difference, between the two aliphatic amino acids, as was observed for the first catalytic site of IleRS. This finding implies that a putative ancestral enzyme of IleRS and ValRS might have actually had a similar dual specificity for L-isoleucine and L-valine in a primordial genetic code system.’28

Of course, a good designer will often use similar machinery to make similar products,29 and it makes sense especially with the extremely close chemical similarity of Ile and Val.25 And their statement is merely ‘just-so’ story telling, lacking even the slightest evidence. It is no substitute for explaining exactly how such an editing site could evolve by natural selection. This site requires many amino acids in precise sequences before it could work at all, thus exhibiting a hallmark of design—what biochemist Michael Behe, in his book Darwin’s Black Box, termed irreducible complexity.30 The problem is especially acute in this case—since natural selection equals differential reproduction, if there is poor editing, then accurate reproduction of successful traits is impossible. Error catastrophe is more likely.29,31, 32