Why would a designer leave debris floating in space?

CMI received an interesting question from Marco T. about matters which he thinks may cast doubt upon the universe being intelligently designed. Marco’s question is given first, followed by a reply from Andrew Sibley.

Please help me with my questions.

I believe God is the designer of the universe but [I] ask: why would a designer even want to leave debris floating in space? Where it can crash into moons and planets at seemingly random times? The landscapes of planets and moons appear random, not intelligently designed.

And why design entire galaxies that collide with one another? Wouldn’t a designer want to place enough distance between them so that this never happened? Such events give us the impression that this is chaotic and random, not carefully designed.

It is not possible to second guess why a designer would do one thing, and not another. That is because the Creator is free to create according to His will. And God’s ways are higher than our ways.

Perhaps you are thinking of the space object ‘Oumuarua in your question. This object has surprised astronomers with its unusual elongated shape, and its origin, which is believed by many astronomers to be from interstellar space.

In one sense it is not possible to second guess why a designer would do one thing, and not another. That is because the Creator is free to create according to His will. And God’s ways are higher than our ways:

But there is nothing new in finding chaos in the universe; it is here on Earth. The waves on the surface of the sea are chaotic, earthquakes happen, and the atmosphere is a chaotic system, involving clouds, thunderstorms and hurricanes. While the weather can become severe at times, for the most part we are protected. Because of God-given wisdom, we can take precautions to protect ourselves from the worst of the weather. And we can pray for divine protection, relying upon God’s grace.

But we know that sometimes people are harmed by wild weather, or by stormy seas, and earthquakes. Can we put it down to divine judgement? The answer will sometimes be yes, sometimes no—so discernment is necessary—but we cannot be certain in the absence of specific divine revelation. In contrast, we can know that the Noahic Flood occurred because of judgement (Gen 6:3), as was the case of Jonah who was swallowed by a sea creature because he ran from God (Jonah 1:4). And yet, when Jesus probed about the Tower of Siloam which fell, killing 18 people (Luke 13:2–5), He asked His listeners whether those who died were worse sinners than others still alive? The answer was no.

The Earth’s atmosphere, in terms of temperature, pressure, carbon dioxide, and water content, is just right to support life. God should be given credit for the beauty, complex design, wonder, and the awesomeness of the whole of creation.

And yet we also see that these chaotic systems allow birds to fly, and marine creatures to live. In the universe we see highly ordered structures, such as the double helix of DNA and molecular protein machines, and also chaotic systems. And those are sometimes beautiful: the rings of Saturn, the spiral shapes of galaxies, and the shape of weather systems when viewed from space.

In Genesis 1:1–2 we see that God created the universe initially empty of life, without form and structure. And then God imposed form upon the creation, and filled the Earth with living things. And yet there are still chaotic systems in the universe.

But here on Earth we are wonderfully protected by the atmosphere, which supports life. We live in the Goldilocks zone (explained here), just the right distance from the Sun to support life. The Earth’s ionosphere shields us from the Sun’s X-ray flares, the magnetosphere protects from harmful high energy particles, and the stratosphere filters out the worst effects of UV rays—see Designed atmospheres?)

The Earth’s atmosphere, in terms of temperature, pressure, carbon dioxide, and water content, is just right to support life. God should be given credit for the beauty, complex design, wonder, and the awesomeness of the whole of creation. Psalm 104:1–4 says it well:

Bless the Lord, O my soul!
O Lord my God, you are very great!
You are clothed with splendour and majesty,
covering yourself with light as with a garment,
stretching out the heavens like a tent.
He lays the beams of his chambers on the waters;
he makes the clouds his chariot;
he rides on the wings of the wind;
he makes his messengers winds,
his ministers a flaming fire. 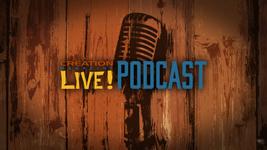