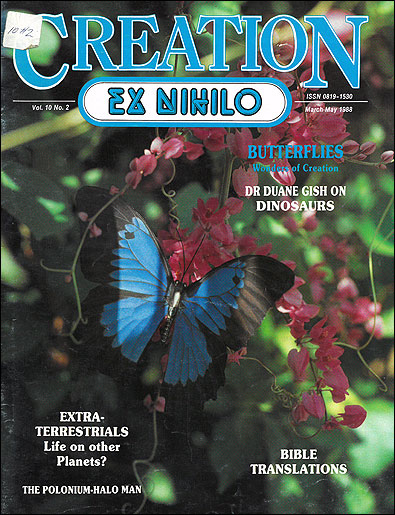 A radioactive metallic element discovered late last century by the famous chemists and physicists Pierre and Marie Curie, has lately been shown to reveal strong evidence for creation. It has also sparked a fiery challenge to evolution theory.

The element is polonium. It was the first radioactive element to be isolated in a fairly pure state, which was done by the Curies in 1898. More recently, American physicist Robert V. Gentry has done immense research on tiny ‘halos’ (spheres of discoloration) formed by polonium and other radioactive elements in rocks. [See Dr Margaret Helder’s article about Robert Gentry in this issue of Creation.]

In the early 1960s, Gentry developed a fervent interest in the age of the earth. Inspired by evidence for a young earth implied by Dr John Whitcomb and Dr Henry Morris in their book, The Genesis Flood. Gentry saw the halo evidence mentioned in the book as being a major key to correctly determining the earth’s age.

For more than 20 years now, Gentry’s excellent experimental work and observations on these radiohalos qualify him without doubt as the world’s leading authority on them. During these 20 years he has submitted his results to the secular scientific community for review. He has had work published in such prestigious scientific journals as Science, Nature, and Physics Today. He has discussed his evidence with scientists from government research laboratories and told them the implications of his evidence.

And what does such a leading authority say the radiohalos indicate? He says they show that the basic evolutionary premise of earth history is wrong. He says that rocks known as Precambrian granites were created almost instantly as a part of the creation event recorded in Genesis 1:1 rather than [being] rocks that are a product of the evolution of the earth.’ He says ‘the Big Bang version of primordial polonium is without any scientific basis.’

Gentry believes our galaxy was created about 6,000 years ago. And this is what he proposes in his creation model. Early in his research, Gentry decided to investigate every possible explanation for the polonium halos—except, he says, the one ‘that they were created’. He reasoned that if evolutionists were unable to dispute this evidence and provide a verifiable conventional explanation for the polonium halos, he would be certain they were placed there by God as indisputable scientific evidence for the Genesis record of creation.

Gentry’s work has never been refuted. But in 1984 the US National Academy of Sciences published a booklet with sweeping criticisms of creation science. Gentry took particular exception to the booklet’s statement that ‘when the evidence for creationism has been subjected to the tests of the scientific method, it has been found invalid.’ He eventually issued a public challenge to the academy.

On August 4, 1986, Gentry wrote to the academy and requested a copy of any report the may have had which supposedly invalidated his results. None came. He invited the academy’s president to bring as many evolutionists as he could muster to a scientific presentation of Gentry’s work at the International Conference on Creationism in Pittsburgh in August, 1986. They were asked to bring any evidence which they believed invalidated his scientific research, or phone if they could not come.

The academy’s president and his invited team did not even respond to Gentry’s challenge until April 7, 1987, after a lapse of eight months, and after Gentry’s third letter. In his reply, the president of the National Academy of sciences presented no refutation of Gentry’s evidence. He merely reaffirmed evolution. Another invitation to refute Gentry’s work was made to the academy, this time at the University of Tennessee on April 13, 1987. Again no one from the academy turned up.

Robert Gentry suggests that if his work cannot be invalidated, then all who hold to the uniformitarian view of earth’s history should carefully consider his claim: that God has provided scientific evidence of creation which will help those who doubt Genesis come to a full knowledge of the truth of His word.

Though scriptural truth neither stands nor falls on the accuracy of Gentry’s work, in the face of such an important challenge to basic evolutionary premises, Gentry’s claims must not be lightly dismissed by critics of creation science. Before further criticism, let those who believe that the earth was not created in accord with God’s word in Genesis, at least show Robert V, Gentry where his work is wrong.