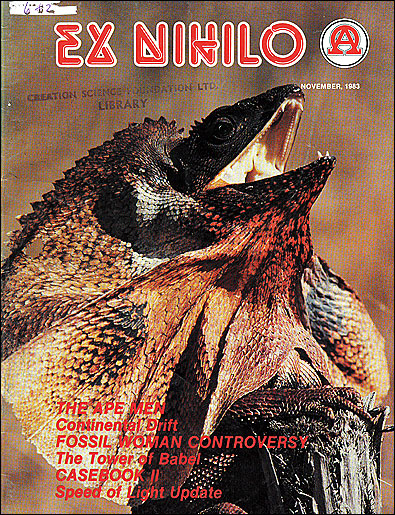 Focus: News of interest about creation and evolution

‘By a 4-to-3 decision, the Louisiana Supreme Court has upheld the state legislature’s right to require “balanced treatmentâ€? of creation science in those public classrooms teaching evolution. Louisiana is the only state with a creation-science law. Implementation of the law has been suspended, however, pending legal resolution of its constitutionality.’

Research over the past five years in the Kelly Caves of Kangaroo Island has shown that stalactites can grow at rates of up to 1/2 inch (7mm) in four years. This is contrary to the usual evolutionist claim that stalactites grow, at the most, an inch a century and therefore any limestone caves must be very old. Such a high rate of growth in stalactites indicates that even many of the larger stalactite growths could have occurred in a reasonably short time, and therefore the caves are not necessarily old at all. Even in Australia’s famous Jenolan Caves, stalactites have been reported growing from the man-made guide wires and electric installations.

The Australian Museum has released a new book on Australia’s prehistoric fauna. The publication features such fossils as the marsupial lion, Thylacoleo carnifex, the giant kangaroo (Phascolonus gigas) which was much much bigger than today’s kangaroo, and dinosaurs with such colourful names as Muttaburrasaurus.

That coal could form in periods ranging from two weeks up to one year has been shown by Randall Winans of the Argonne National Laboratory, Illinois. In work to be described at the International Organic Geochemistry Conference in the Netherlands (September), Winans and his colleagues have made simple coals by heating lignin—a sort of glue for the cellulose fibres in woody plants—to about 300 degrees Fahrenheit in the presence of clays. Winans has claimed that the clays appear to serve as catalysts to enable a far more rapid production of coal than many scientists have been prepared to accept.

Three hundred degrees Fahrenheit is a fairly common temperature in geological formation and clays are found naturally in coal deposits. Creationists have long claimed rapid formation for coal and hopefully Winan’s work will go some way towards making this more convincing.

Twin boys, Thomas Charnock and Wesley Charnock, are about as different as you could get. Thomas is black and Wesley is white. Born in Lancashire. U.K. 17 months ago, Wesley has inherited his father’s English features (fair skin, blue eyes and blond hair), while Thomas has his mother’s part-Nigerian darker skin and brown eyes. The twins’ parents report that they did not notice the difference between their sons when they were first born. Skin colour differences in all races are minimal at birth, as the pigment which causes skin differences, the amount of melanin a person has, does not show up significantly until the child is exposed to sunlight.

The R.A.C.Q. (Royal Automobile Club of Queensland) insurance company is using evolutionary concepts to advertise the Club’s insurance services. The advertisements which are played on radio go something like this: ‘Ever since man came down out of the trees he needed his club for protection … a bear skin, some pieces of mint and a buffalo wall painting were among the caveman’s most treasured possessions. He used the club to protect his property.’ The advertisements go on to say that you as the consumer should use your club (the Royal Automobile Club) to protect yourself.

Dr. Carl Sagan, President of the Planetary Society, has announced the initiation of its member supported search for extraterrestrial intelligence. Previously, U.S. Government cut-backs had severely reduced money available for searching for life in outer space. Sagan and Co. then went looking for private funds to permit their research to continue. The group are funding a small Sycat system 150 desk-top computer which is able to monitor 131,000 radio channels simultaneously. The group claim their new receiver is so sensitive it accomplishes in one minute what would have previously required 100,000 years using the techniques of the first scientific search for intelligent extra-terrestrial radio signals in the early 1960s. According to the group, Harvard University’s Oakridge radio telescope is now dedicated to a four-year search programme, 365 days a year, 24 hours a day.

The Iguanodon is one of the best known of all English dinosaurs. It was the first to be discovered. But most dinosaurs discovered on the British Isles have only been bits and pieces. Early last year an exception was found. Nick Chase on the Isle of Wight discovered an Iguanodon skeleton that was both well-preserved and fairly intact. The skeleton has been under treatment to remove the surrounding rock and personnel are making ready to do a detailed anatomical reconstruction of the skull.

Comb jellies (ctenophores) are soft-bodied creatures. Until recently, the ctenophores were one of only 21 of today’s living animal phyla which had not been discovered in the fossil record. This rare fossil was discovered in a rock extracted from the Hunsruck slate formation in West Germany. It was preserved by having been converted to ‘fool’s gold’ or pyrite. The fossil, 13mm high and 9mm in diameter with its tentacles intact, was discovered along with trilobites. Its discoverers, Stanley and Urmer, wrote, as reported in Science News, Vol. 124, July 9, 1983, ‘Our discovery demonstrates that the basic ctenophore body plan has changed very little.’ It also demonstrates how rapidly the soft-bodied organism had to be buried. Both of these facts in no way aid the concept of evolution but are excellent support of (a) the existence of fixed kinds as expected because of creation, and (b) rapid fossilization as expected from a world-wide flood.

Thomas Loy, Associate Curator at the British Colombia Provincial Museum in Victoria, has analysed Canadian stone artifacts ranging in age (his estimate) from 1,000–6,000 years and found blood on 86% of them. Using chemical tests, he has confirmed the blood deposits were crystallized. He then analysed the crystals to find the species which produced the blood (blood can be characterised by observing the size and shape of hemoglobin crystals). Loy matched the crystals of fossil blood to those of existing animals and claims to have discovered blood residues from deer, moose, rabbits, sea lions, sheep, caribou, and grizzly bears. Loy’s findings reported in Science News, Vol. 123, June 18, 1983 contradicted previous theories by blood experts that such blood residues readily decompose. But as Loy pointed out, ‘the problem was that we never really thought to look for them.’ Loy’s findings also mean that blood hasn’t evolved either.

Despite the glamour given in the Press to the alleged discovery of another solar system, few people were told what the conclusion was based upon. Scientists claiming to have discovered ‘the first direct evidence that solid objects of substantial size exist around a star other than the sun’ were talking about Vega, fifth brightest star in the sky. Their evidence? Infra-red radiation emitted across a range of about 7.4 billion miles from Vega. The scientists have interpreted this to represent energy re-radiated by solid particles heated up by Vega itself. The research team involved believes that these particles are probably a few millimetres or more in size and form a band around Vega … and that is the evidence!