Tortoises of the Galápagos

by Lita Sanders and Jonathan Sarfati

The Galápagos archipelago is a group of volcanic Pacific islands located on the equator, 972 km west of continental Ecuador. They are probably most famous for Darwin’s historic month-long visit on the Beagle in 1835. The strange creatures that Darwin reported on, such as the birds1 and marine iguanas,2 have fascinated readers since. But the iconic species is the native giant tortoise, from which the archipelago receives its name (see box). The largest living species of tortoise, the Galápagos tortoise can weigh over 250 kg (550 lb) and live for over a century.

Darwin and the tortoise

Charles Darwin studied the tortoises, and the islands’ vice-governor told him that one could tell from its characteristics alone which island a tortoise was from. Darwin initially dismissed this statement, and rightly so, since even modern evolutionists admit that it was something of an exaggeration. So he took the differences between the varieties of tortoises to be nothing more than the sort of variation which could arise from a species being transplanted to a different habitat.3 But he failed to take detailed notes of the variations among the tortoises (his notes mostly record their behaviour) or to take specimens for scientific study.4

The Galápagos tortoises were subject to overhunting by humans who kept them for food on ships. This decimated the population. The giant tortoises were seen to be an excellent source of fresh meat, as the tortoises could be kept for long periods of time with little food or water. The sailors on the Beagle took 30 on board for this purpose, discarding the shells and bones as they consumed them. (Woodmorappe suggests this as one more possible food source for carnivores on the Ark; fodder tortoises.5)

Darwin took two young tortoises as pets. And they, along with specimens Captain FitzRoy took for the British Museum, constituted Darwin’s only evidence when he realized the tortoises’ importance.6

Over 10 sub-species have been identified (four of which are extinct), because they have distinct physical characteristics. But they can all interbreed with one another, so they are classified as one species of tortoise, Geochelone nigra.7

The most distinctive difference among the sub-species is the variation in the shape of their shells.

These range from a large dome shape to a saddle shape. The dome-back tortoises live where there is plentiful vegetation to support their huge size, while the smaller saddle-back tortoises tend to live in places where vegetation is sparser.

When the tortoise withdraws into its shell, the bony plates combined with scales on the legs offer protection from any predators. The length of the tortoises’ neck and limbs also vary among the sub-species; the saddle-back tortoises have longer necks and legs than the dome-shelled tortoises.8

Evolutionists cite the variations among the sub-species of Galápagos tortoise as an example of evolution. But this is the typical equivocation or the bait-and-switch game of propagandists.9 Evolution from goo to you via the zoo would require new genes encoding encyclopedic amounts of new information. But the tortoises’ adaptation to various island environments can be explained by the sorting out of already existing genes, with some of these then eliminated by natural selection.

For example, suppose a parent population of giant tortoises had a variety of genes for neck length. Then their island lost much of its grass, so the tortoises had to browse low-hanging leaves for food. Then those with genes for short necks would be more likely to starve before passing on their genes. But the creatures fortunate enough to carry genes for long necks could browse on higher leaves, and thus survive to pass those genes on. So the next generation would have longer necks on average. This is definitely natural selection in action, but not evolution. The possibility for these variations was already coded in the DNA of the tortoises’ ancestors, which allowed the tortoises to adapt to varying levels of vegetation and other environmental factors.

Darwin vs a faulty creation model

Darwin was right about the role of natural selection in producing varieties of the tortoises. But he claimed that it disproved creation. Unfortunately, much of the church of his day had abandoned belief in biblical creation, the global Flood, and the subsequent dispersion of animals after the Ark landed. So the main rival view to any transmutationist10 notion was “centres of creation” with “fixity of species”: a creator had created different species in practically the exact form and location that we see now. His demonstration that some species on islands are clearly related to similar species on the mainland was a blow only to such non-biblical views on creation. To those who believed the Bible’s history, including all creatures having to repopulate the earth from one location, it would have been a completely consistent finding. Thus the church’s compromise view gave him an easy “straw man” to knock down.11

In CMI’s stunning Darwin documentary, The Voyage That Shook the World, we see an evolutionary expert refer to the astonishing types of hybridization, or crosses, that have taken place on the islands, even between two seemingly very different types of animal. The film raises this as an argument for a young age for the islands—thousands of years. The reasoning is, as CMI geneticist Dr Rob Carter points out in Voyage, that the Galápagos species “made the jump from the mainland in the first place, and it’s 600 miles away, but the major islands are some 30, 40-odd miles apart … . so over deep time, over millions of years, you would expect species to jump again and again and again and again, and you get all sorts of hybridization, and you get a blurring of the species lines.” Why then, the film asks, do we see “a tortoise on one island so different from those on another?” The obvious answer speaks strongly against evolution’s “millions of years”.

Since this process generally selects only from genes already available, creationists would expect there to be a limit to this variation. Such a process would not produce a neck as long as a brachiosaur’s, for example. Another possibility is a mutation that inhibited a gene that controls growth factors for the neck. Without this control, the necks overgrow somewhat. On the grassless island, this information-losing mutation would be beneficial. But with plenty of grass, such a mutation would not be so beneficial since it would waste resources growing a neck longer than required.12 Further, creationists are not surprised when such changes happen much more quickly than evolutionists would predict.13 Not only is this consistent with the above explanation, but it is a prediction of the biblical Creation/Fall/Flood/Dispersion model.


Which came first—the tortoise or the saddle? 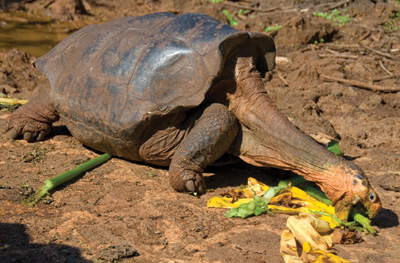 It is commonly stated that the Galápagos islands derive their name from the Spanish galápago, meaning a type of riding saddle, due to the saddle-shaped shells of some tortoise varieties there. It is, however, more likely to have been the other way around. Although modern Spanish tends to use the word tortuga for turtle/tortoise, a primary meaning of the word galápago is tortoise (in addition to being a type of saddle). More tellingly, the archipelago appears in maps drawn in the 1500s, shown as Insulae de los Galopegos. This is not likely to have been intended as “islands of the saddles”, but rather “islands of the tortoises”. Hence the horned riding saddle so reminiscent of the shell shape of some Galápagos tortoises was likely named after these creatures—not the other way around.