The geological history of Tasmania, Australia

From a biblical Flood perspective

… the Bible provides a powerful framework for geological history that gives new insights and appreciations.

The global Flood catastrophe, both its cause and progress, involved enormous, ongoing tectonic movements of the earth’s crust. Energy released by these movements melted rocks to form magma. This, in turn, was pushed through the crust into dykes and sills and pooled in huge granite plutons.

Crustal movement also fractured, folded, buried, uplifted, and metamorphosed rocks. Plus, crustal movements swept enormous volumes of water across the earth’s surface, which eroded rocks to produce sediments, which were washed across the earth and deposited in lower lying sedimentary basins.

Crustal movements occurred in convulsions—episodically—similar to, but much larger than the way earthquakes occur today. A sudden movement was followed by a pause, and then another sudden shift followed by another pause, etc. These ongoing, jerky movements progressively allowed the floodwaters to rise until they covered the whole earth, about five months after the Flood began. As the crustal movements continued, they caused the ocean basins to sink. In other words, the last significant crustal movements of the Flood enlarged the ocean basins, which made the water flow off the continents into the oceans. These movements also proceeded episodically.

The oldest rocks in Tasmania formed early in the Flood (Genesis 6–8), within days or weeks after the catastrophe began some 4,500 years ago. In the standard geological classification system these have been labelled as forming in the Proterozoic, also called the late Precambrian. The geology transformation tool has allowed us to re-interpret the standard geological classification into a biblical framework. These rocks are exposed on both the west and east coast of the island (see geological map of Tasmania in figure 1). They were emplaced catastrophically, originally as igneous and sedimentary rocks. However, powerful movements of the crust at around the same time buried and metamorphosed these rocks to form quartzite, phyllite and schist.

Some of the names given to these formations (figure 1) are the Rocky Cape Group, the Adamsfield-Jubilee Element, the Oonah Formation, and the Arthur Lineament.

Enormous crustal convulsions (in the Cambrian) thrust deep oceanic crust as a sheet over the top of the earlier (Precambrian) rocks. These crustal movements generated and moved more magma through the earth, forming granite in the crust, and pushed water across the surface eroding and depositing more sediment (Cambrian to Silurian—see geology transformation tool).

Some of the rocks formed at this time and exposed on the west coast include the Mount Read Volcanics that are underwater eruptions interbedded with sediment. At this time, hot mineral-rich fluids generated from the magma formed ore deposits of copper, lead, zinc and silver, which are mined on the west coast at places including Zeehan, Dundas, and Rosebery.

More crustal movements (in the Devonian) melted and moved more magma, emplacing further granite plutons. While some of these are exposed on the west coast, other significant exposures are encountered on the north-east coast and on Flinders and Cape Barren Islands.

Catastrophic water movements continued, eroding the surface of the earlier rocks, and depositing the eroded material as sandstone, limestone, siltstone, and clay in a huge depression called the Tasmania Basin.1 The surface on which they were deposited at this time was uneven. Marine fossils include molluscs, brachiopods, bryozoans, and crinoids. Also, much vegetation was deposited that is now present as coal and petroleum.

The oceans and waterways were colonized by marine animals that were left in the waters on and around the continent after the Flood.

These sediments have been called the Parmeener Supergroup (figure 1) and assigned from the late Carboniferous to the late Permian. Since deposition, these sediments have not been significantly disturbed, consequently they are still reasonably horizontal and cover a large proportion of Tasmania.

The lowermost Parmeener rocks are described as diamictites. These are a poorly sorted rock with a mudstone or sandstone matrix that contains varying proportions of larger gravel clasts. Long-age geologists have wrongly interpreted these as forming in a glacial environment and call the rocks ‘glacial tillite’. However, glaciers would not develop during the biblical Flood, so a different interpretation is required. These sediments are more appropriately interpreted as being deposited by underwater debris avalanches. These produce similar features and are consistent with the catastrophic nature of the Flood.

Another problematic interpretation was applied to the thick deposits of mudstone and siltstone. The interpretation follows the usual line that such fine sediments require a quiet, still, shallow-water environment to allow time for the fine particles to deposit. However, recent laboratory research demonstrates that fine sediments will deposit from flowing water, a new discovery that calls for a major reinterpretation (see Mud experiments overturn long-held geological beliefs).

These are just two examples of how, at face value, the standard geological interpretation (based on uniformitarianism) presents a problem for Bible geology. These problematic interpretations are to be expected and are a good thing to uncover. They reveal areas where alternative explanations are required, calling for further research and investigation.

As the floodwaters reached their peak, covering the whole island, strong water currents greatly eroded the surface. Then, continuing crustal movements caused the ocean basins to begin to open and deepen, which in turn caused the water to flow off the continental surface into the oceans. This receding flow also continued to erode the surface until eventually the island of Tasmania rose above the ocean. Geologists have described this as the breaking up of Gondwana and the uplift of the continents.

As to be expected, this crustal movement produced an enormous volume of molten rock (magma), which was pushed upwards through fissures in the crust. This was squeezed into the sediments of the Parmeener Supergroup, mostly in horizontal sheets called sills, forming what has been called the Jurassic Dolerite. Dolerite has a basaltic composition and a medium grain size. The Jurassic Dolerite covers over one third of Tasmania (30,000 km2), but possibly more of the land in the past. It forms prominent landscape features such as Mount Wellington near Hobart and The Candlestick sea cliff on the Tasman Peninsula. The volume of magma (15,000 km3), the enormous thickness of the sills (up to 500 m), and the length of the columnar jointing (figure 2) are powerful evidence its emplacement was an enormous catastrophic event, as we would expect from Noah’s Flood.

With the deepening of the ocean, the floodwaters were able to recede, first in wide sheets that eroded large areas of rock from the surface forming plateaus and tablelands at progressively lower elevations. The geological map reveals how the Parmeener Supergroup has been eroded away on the west coast and the north-east coast exposing the older rocks underneath. In these regions, some isolated remnants of the Parmeener Supergroup have managed to escape total erosion, forming erosional remnants.

As the water drained and the flow of receding water reduced, the water was confined to wide flowing channels. This channel flow routinely created wind and water gaps, overfit valleys, and significant drainage patterns upon the land.

Around this time, the Flood routinely produces a ‘deeply weathered’ land surface with thick regolith (also called laterite or ‘soil’). This process would have been due to characteristics of the receding waters such as their containing aggressive corrosive agents or fine sediments being deposited at this time.

After the Flood, sea temperatures were warmer than today causing increased evaporation. This led to increased precipitation and consequent build-up of thick glaciers and ice sheets on most continents of the globe. The Tasmanian landscape, especially in the areas of high elevation, has evidence of being glaciated at this time. The ice build-up on the continents meant that sea-levels were reduced during this time, with some estimates as much as 100 m.

With a sea level drop of some 55 metres the floor of Bass Strait would be exposed and the present islands would have been hills overlooking a broad plain. This formed a land bridge that connected Tasmania to the mainland, allowing for the migration of people and animals.

After several hundred years, the oceans cooled, evaporation reduced, and the ice on the continents melted back. Sea levels rose, isolating Tasmania from the mainland. Sea levels would also have been affected by ongoing post-Flood adjustment of the continental crust.

Also, after the floodwaters had receded, the continent would have been vegetated by seeds and plants left on the surface. In the centuries since, these plants have adapted to the changing climates that have occurred, producing some distinctive plants in Tasmania. Gondwana rainforest vegetation is pervasive in the southern hemisphere, on southern Africa, southern Australia, and South America.

The oceans and waterways were colonized by marine animals that were left in the waters on and around the continent after the Flood. However, the air-breathing land animals that now live in Eastern Australia are descended from the animals that came off the Ark on the mountains of Ararat in the Middle East. Over many generations they spread across the earth, entering the Australian mainland by using land ‘bridges’ through the Indonesian Islands, when sea levels were lower.

Humans also came to Australia after migrating from the Middle East through India and Indonesia. Humans have been responsible for bringing many animals to Australia, such as dingos and rabbits. Native Tasmanian animals, which would have settled there after the Flood include the Tasmanian devil, wombat, and kangaroo-like pademelon

Landscape erosion, sedimentation and volcanic eruptions have occurred in the 4,500 years since the Flood, but the effect of these was minor compared with what happened in the catastrophic year of the Flood itself.

A geological history like this is based on a biblical interpretation of the geology of the area. It allows us to understand the timing and the processes involved in the development of the present landscape and provides a framework for research and investigation. The topics affected are innumerable, including geology, geography, geomorphology, palaeontology, waters rising on the earth, continental break-up, waters falling, ice age, sea-level changes, biogeography, aquatic animals, land animals, human migration, and settlement, etc. Detailed consideration of each aspect of the geological history allows for discussion and research into what happened in each of those periods. It also highlights interpretations within the accepted long-age interpretation that do not fit into the biblical paradigm, and thus need new interpretations and further study. 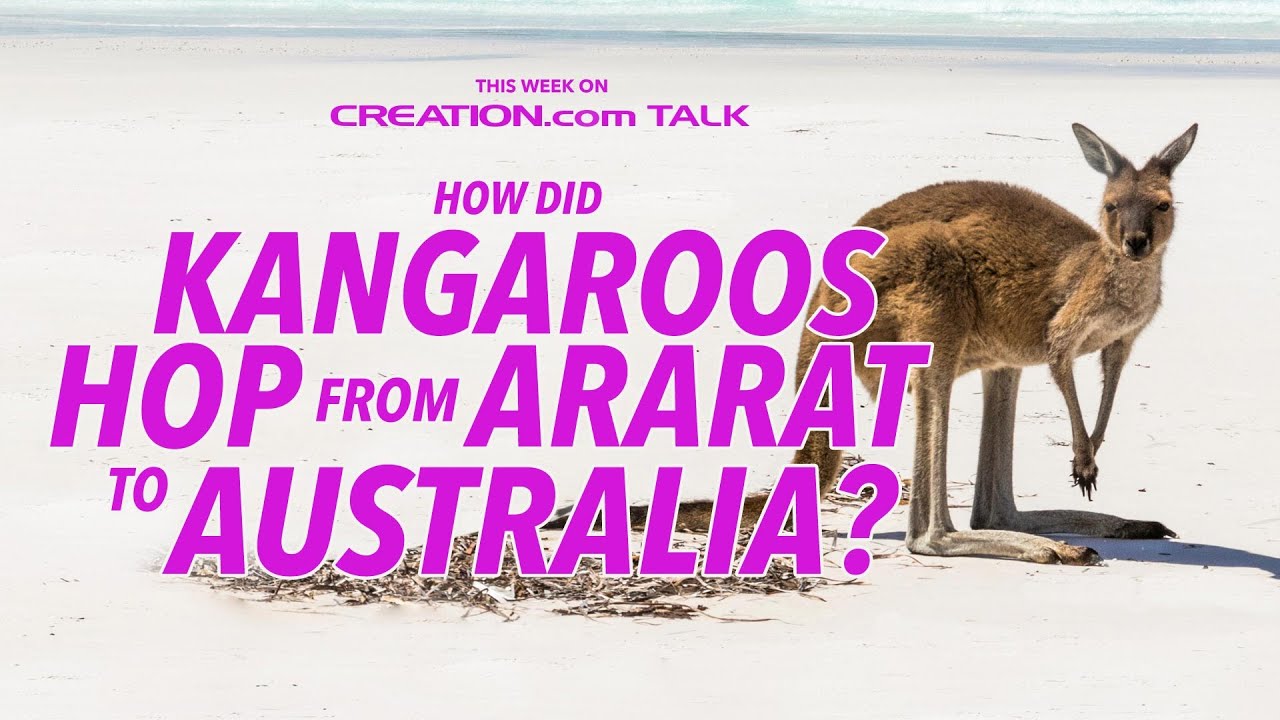 How Did Kangaroos Hop from Ararat to Australia?