Geologic catastrophe and the young earth

Geologist Dr. Steven A. Austin has rafted through Grand Canyon, helicoptered into the Mount St. Helens volcano, and flown onto glaciers in Alaska. He is currently Senior Research Scientist with the Institute for Creation Research where he has worked for over 37 years. His geological adventures have taken him high into the Sierra Nevada, deep underground into coal mines, over plateaus, through deserts, and beneath the ocean.

For as long as he can remember, Steve has loved rocks.

“I saw my first geologic map when I was three. My dad often took me fishing, which meant going over mountain ridges where I saw lots of rocks. Before I could read I was classifying minerals and by five I had a large rock collection.”

Steve is known for his remarkable research on the Mt St Helens volcano in Washington State, USA, which erupted catastrophically in May 1980.

“I had just defended my PhD thesis at Penn State University on the floating log-mat model for the origin of the Kentucky coal beds, which means the coal deposits formed much faster than traditionally believed. Mt St. Helens exploded ten months later and made Spirit Lake into a giant bath tub covered with floating logs. That’s why I had to go there.”

What he saw was overwhelming. “It happened at the right time and in the right place,” Steve said. “The volcano was so well monitored that it was indisputable what catastrophic processes do to a landscape in super-quick time.” Steve sees Mt St Helens as having application to geologic features everywhere: Yellowstone National Park, petrified forests, coal layers and Grand Canyon. It transformed geological thinking by showing dramatically how geologic features form quickly.1 It even illustrates how animals could have repopulated the earth after the Flood.2

When Steve did his training in the 1970s, the idea of uniformitarianism held sway—the belief that geological processes happened slowly and that the earth must be millions of years old. But Mt St Helens helped blast that idea away. Geologists began to see evidence for past catastrophe everywhere.

“That led to a change in thinking,” Steve said. “I could go back to my professors and say, ‘I told you so.’ The fact is that geologic features form rapidly and not over millions of years. The geologic evidence is entirely consistent with the biblical timescale.”

Grand Canyon has figured prominently in Steve’s geological career. In 1994, he published a creationist classic, Grand Canyon: Monument to Catastrophe.3

“That book came out of the guide books I produced for the tours we conducted,” Steve said. “Grand Canyon is supposedly an icon for evolution but now it’s an icon of Creation and the Flood.”

One spectacular evidence of catastrophe that Steve discovered in Grand Canyon was a thick bed containing multitudes of fossil nautiloids.4 Shaped like a skinny dunce’s cap, nautiloid shells came from an animal that was like an octopus, or cuttlefish.

The shells are exposed in the walls of Grand Canyon in a 2-metre layer of rock called the Whitmore Nautiloid Bed. It’s a huge bed that extends over 300 km (200 miles), as far west as Las Vegas, Nevada.

“I believe the bed was formed by an underwater mud flow,” Steve said. “The water was full of mud, what we call a slurry, and so was much denser than the surrounding water. The slurry rushed down the steep slopes of the underwater mountains, gathering speed like an avalanche. And it careered across the ocean floor as fast as a semi on the freeway.”

“As the avalanche swept past it trapped the nautiloids and carried them along. I believe that these mud flows were highly pressurized and the fluid kept the sand and mud in suspension. It works like a water cushion and has very low friction, so the mud flow careers across the flat surface of the ocean floor for hundreds of miles.”

“These flows can change suddenly. A high speed slurry can start out as a laminar flow, where the fluid travels in regular, streamlined paths. Then, it can suddenly turn turbulent where the fluid flow is curly and irregular. You can see the same effect in the smoke from a candle that has just been put out.”

There is real science in measuring amounts of radioisotopes, but age is an interpretation of these amounts.

“Turbulent flow can’t carry the mud so it dumps its load suddenly across the ocean floor.”

“And that is what happened to the nautiloid shells. They were deposited quickly, frozen in time. One in every seven is standing vertical in the bed. The others tend to point the same way indicating the direction of the slurry flow. It’s a very interesting arrangement of fossils.”

For a long time geologists have thought that limestone rock, like the rock containing the nautiloid fossils, takes many thousands of years to form. “But this bed formed rapidly,” Steve said, “like in minutes. There’s something like 40 or 50 cubic kilometres of sediment in that bed and it was all deposited rapidly. This bed alone illustrates the title of my book, Grand Canyon, Monument to Catastrophe.”

One of the big obstacles to the idea of a young earth is radioactive dating. Steve has researched this for many years, and found that there are lots of problems with the methods. He said, “I don’t feel particularly fulfilled by having people say that I debunked radioisotope dating. There is real science in measuring amounts of radioisotopes, but age is an interpretation of these amounts. My research shows it is a faulty interpretation. I’ve been trying to figure out the real explanation for the radioisotope abundances. I don’t think things have been successfully dated by radioisotope methods.”

He spent 14 years analysing radioisotopes in samples from rocks known as the Cardenas Basalt deep within Grand Canyon.5 This igneous rock is considered to be over one billion years old. “I was able to ‘date’ samples from many different locations using different dating methods based on potassium-argon and rubidium-strontium analyses. The methods gave different ages. How can supposedly ‘infallible’ methods do that? Obviously the assumptions are wrong.”

Steve has also ‘dated’ some lava flows from the young volcanoes at the top of Grand Canyon. Once again, he used two different methods: rubidium-strontium and potassium-argon. And again, the dates from the different methods did not agree. Even one internationally known researcher on radioisotope dating admitted to Steve that half of the ‘dates’ from whole-rock samples from Grand Canyon are wrong.

There’s something like 40 or 50 cubic kilometres of sediment in that bed and it was all deposited rapidly.

Steve discovered a very concealed secret about potassium argon dating that further challenges the basic assumptions of the method. From his rock samples he carefully separated minerals such as pyroxene and olivine, which contain very little potassium, and dated these with conventional potassium argon techniques. In one example, Steve selected pyroxene crystals from samples of rock from the new lava dome on Mt St Helens. The rock was only 11 years old when he collected them yet the pyroxene gave dates of two million years and more.

He also collected rocks from one of the more recent lavas (geologically speaking) that had flowed into the canyon, and separated a very pure extract of olivine. The labs found it had virtually no potassium in it, but contained lots of argon. That means the argon did not come from the radioactive decay of potassium but was trapped within the mineral when the rock crystallized.

“That is a bombshell for potassium argon dating,” Steve said. “It shows the fundamental assumption of the method (that there is no argon initially) is flawed. It shocked the scientists doing the work in the labs.”

In 1994, Steve, along with five other PhDs from a variety of specialties, published a paper about catastrophic plate tectonics, at the International Conference on Creationism in Pittsburgh, Pennsylvania.6 CPT was a little controversial at that time, and still is. In that paper, the creationist scientists described the Flood as a global tectonic event powered by the gravitational pull of the sea floor as it plunged into the earth’s mantle. In their model the plates moved during the Flood catastrophe, not at rates of centimetres per year, but at metres per second. The CPT model explains many of the features of the earth including the uplift of the mountains at the end of the Flood. These were pushed up as a result of plate collision, again, rapidly.

“Before that paper,” Steve said, “there wasn’t really a tectonic model for the Genesis Flood. Whitcomb and Morris in their classic work The Genesis Flood did not have a tectonics emphasis. They didn’t need to because they published in 1961 before global tectonics became popular. But with the publication of our paper, plate tectonics is now a creationist option. This means that Flood geology is in a very healthy situation, especially since there are now other creationist theories out there as well.” 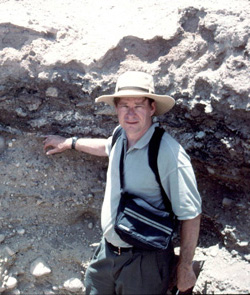 “I want to build a race-track flume,” he said. “It will hold enough water to fill two swimming pools. The channel containing the water will be like an oval race track and I’ll circulate the water with lots of moving paddles.”

“I want to make shale with it,” Steve said.2

The standard thinking is that shale forms slowly over long periods of time in quiet, still water, but Steve is convinced it forms in fast-flowing water.

“I want to create the boundary between the clean and muddy water. If we can understand the hydrodynamics of the boundary we will know how the flow deposits thinly laminated sediment. It needs to be big so it can run about three times faster than flumes in use at present.”

Steve believes that lots of shale layers were built like this including the Marcellus Shale in the Appalachians, the Pierre Shale in the Rockies and the Bright Angel Shale in Grand Canyon.

“If I can show that fine strata can be formed rapidly that would account for basically 70% of the stratigraphic record.3 I believe I can do it with this type of machine.”

“It will make a talking point to the world to show how fine grain rocks form rapidly. And I would like to do it by 2011, the 50th anniversary of the publication of The Genesis Flood. It would be wonderful to honour Henry Morris with a flume that illustrated his ideas on the Flood.”