First appeared in the May 2022 Update

Salvation is through faith, by grace, in Christ alone (Eph. 2:8–9). This anthem is preached from countless pulpits every week. We know it’s true, but when life is full of trials and heartaches, anxiety, worry and stress can follow. How can our faith remain solid when just living takes its toll?

The word ‘faith’ appears in Scripture some 257 times, 27 times in the Old Testament and 230 times in the New Testament. Quite surprisingly, this word is not found in the book of Genesis. Is it because a distinct lack of faith was displayed by humans’ very first encounters with their Creator? In Genesis chapter 2:15–17 we read:

“The LORD God took the man and put him in the garden of Eden to work it and keep it. And the LORD commanded the man, saying, “You may surely eat of every tree of the garden, but of the tree of the knowledge of good and evil you shall not eat, for in the day that you eat of it you shall surely die.”

Faith in God is a matter of trust. And even though Adam experienced firsthand God’s creative splendor and power via the incredible diversity of created life, he lacked one thing—faith. Adam had it all, but a lack of faith in God’s Word ultimately drove him to do the one thing God commanded him not to do

Faith in God is a matter of trust. And even though Adam experienced firsthand God’s creative splendor and power via the incredible diversity of created life, he lacked one thing—faith. Adam had it all, but a lack of faith in God’s Word ultimately drove him to do the one thing God commanded him not to do. This rebellion (sin) plunged Adam and all his descendants into a world of hardship. We sit on this side of history asking, “How could Adam have done this?” Of course, we must confess that we have all done what Adam did, just like the great Apostle Paul who bemoaned his fallen state and constant temptation to sin in Romans 7:15–20 when he wrote, “For I do not do what I want, but I do the very thing I hate” (vs.15). But we also know that when things get hard and our faith struggles, God always makes a way!

Faith isn’t always an easy thing to come by

We all know the history well. In Genesis chapter 3, Adam and Eve were confronted by the crafty deceiver. They had choices, but their faith in God waned. We can relate to this because we face similar “Did God really say” type choices daily. But in the midst of this tragic story, a promise was given for our faith to hold on to.

“The LORD God said to the serpent, “Because you have done this, cursed are you above all the livestock and above all beasts of the field; on your belly you shall go, and dust you shall eat all the days of your life. I will put enmity between you and the woman, and between your offspring and her offspring; he shall bruise your head and you shall bruise his heel” [Genesis 3:14–15], (emphasis ours).

What did the subsequent OT patriarchs understand by this passage? They knew that Adam’s sin plunged the world into such a terrible state that ultimately led God to destroy it and recreate by means of the Earth-destroying global Flood in Genesis 6–9.

Yet, Genesis was full of faith

Although the word faith is not explicitly mentioned in the book of Genesis, it does not mean that no faith was being displayed. In the great ‘chapter of faith’ in Hebrews 11, much of it points back to the incredible faith displayed by the Genesis patriarchs, even though some did not live to see the promises fulfilled. But they knew that God was Creator and so His promises would be fulfilled, somehow, sometime. The patriarchs believed in their Creator, yet they did not even have the benefit of the incarnation, like we do today.

“Now faith is the assurance of things hoped for, the conviction of things not seen. For by it the people of old received their commendation. By faith we understand that the universe was created by the word of God, so that what is seen was not made out of things that are visible” [Hebrews 11: 1–3]

By faith Abel honored his Creator God with a more acceptable sacrifice than his evil brother Cain. “And through his faith, though he died, he still speaks.” Because of his faith, God made a way.

“By faith Enoch was taken up so that he should not see death”, because of his faith, God made a way.

“Noah, being warned by God concerning events as yet unseen, in reverent fear constructed an Ark for the saving of his household.” Despite untold work and effort, and persecution from an unbelieving culture, because of his faith, God made a way.

“By faith Abraham obeyed when he was called to go out of a place that he was to receive as an inheritance. And he went out, not knowing where he was going”. And was told later he would be a father in his old age, then was asked by God to sacrifice his only son. Because of his faith God made a way.

By faith Moses chose rather “to be mistreated with the people of God than to enjoy the fleeting pleasures of sin.” Moses, led God’s people out of the hand of slavery, found himself at the banks of the Red Sea, and because of his faith, God made a way. Salvation would come to all the world through the nation that God formed through adversity in Egypt.

A proper understanding of Creation strengthens our faith

People that are skeptical of a true biblical view of Creation have a misplaced faith. Without Adam literally being created and told not to eat of the fruit of the knowledge of good and evil and subsequently sinning; without a literal promise of the coming Messiah, all hope is lost because the Genesis story cannot be true.

People that are skeptical of a true biblical view of Creation have a misplaced faith. Without Adam literally being created and told not to eat of the fruit of the knowledge of good and evil and subsequently sinning; without a literal promise of the coming Messiah, all hope is lost because the Genesis story cannot be true. Without a literal first Adam you cannot have a literal last Adam. If death and suffering have always existed as evolution claims, why did Jesus have to fulfill the promise given to us in Genesis 3:15 and die? One cannot divorce Genesis chapters 1–11 as literal history from your theology and face the floods of this life.

Genesis is an epic story of how we messed up and the gracious plan to save us from ourselves. Sometimes the struggles don’t seem fair, but we should keep this history in mind and that we live in a fallen world damaged by sin. And to remember that if you have faith, God makes a way. You are trusting the very One who “In the beginning … created the heavens and earth.”

The last two years has been tough for all of us—CMI included. Indeed, we are a ‘faith-funded’ ministry. Without your ‘faithful’ support, we might not still be here. We thank God and pray for you every week during our staff prayer time. You have understood that our main purpose here at CMI is to produce ‘faith’ bolstering information that keeps you and your families on the chosen path. All our information is peer reviewed, so that you can confidently share it with others. Unlike the patriarchs of old, we are truly blessed because we have seen the fulfillment of Genesis 3:15 in Christ. Thus, we have been given an eternal hope. But what about those who don’t know Christ? Evolution is the major reason people doubt the first Words of the Bible and that God is Creator. Showing people that the evidence of our world makes more sense in a biblical framework is a successful¸ method of evangelism. Don’t let the scoffers tell you otherwise when they say:

“’Where is the promise of his coming? For they deliberately overlook this fact, that the heavens existed long ago, and the earth was formed out of water and through water by the word of God” (2 Pet. 3:4–5).

If God is the Creator as Genesis describes, then He is the only one who has the power to save us. Moreover, if He created once, He can, and will, do it again. Being assured of this, many people have written to us over the years expressing heartfelt gratitude for the life changing information CMI has provided.

“Just a thank you to all at CMI … your ministry is exceptional and encouraging. Just read the “CMI Extra’ that came with the magazine. Gary’s words are really encouraging and empowering, as they remind us why we’re still here once we’re saved, and who really has the power. Thanks so much, every now and then I need to be reminded. This article will stay permanently glued to my fridge door!”—Matt S.

Here is another powerful testimony of encouragement:

“Dear scientists at CMI, [I am] just moved to write and say thank you for the wonderful work you do, as I read the daily bulletins, but also for speaking engagements, books, the magazine etc. etc. God has surely raised you up for such a time as this. The battle still rages within the Church, and your work does so much there, and in the world of course. We pray for you! Press on! Sincerely and thankfully in Him”—(Rev) Len P.

Hold tight to your faith even when the world seems dark, because: 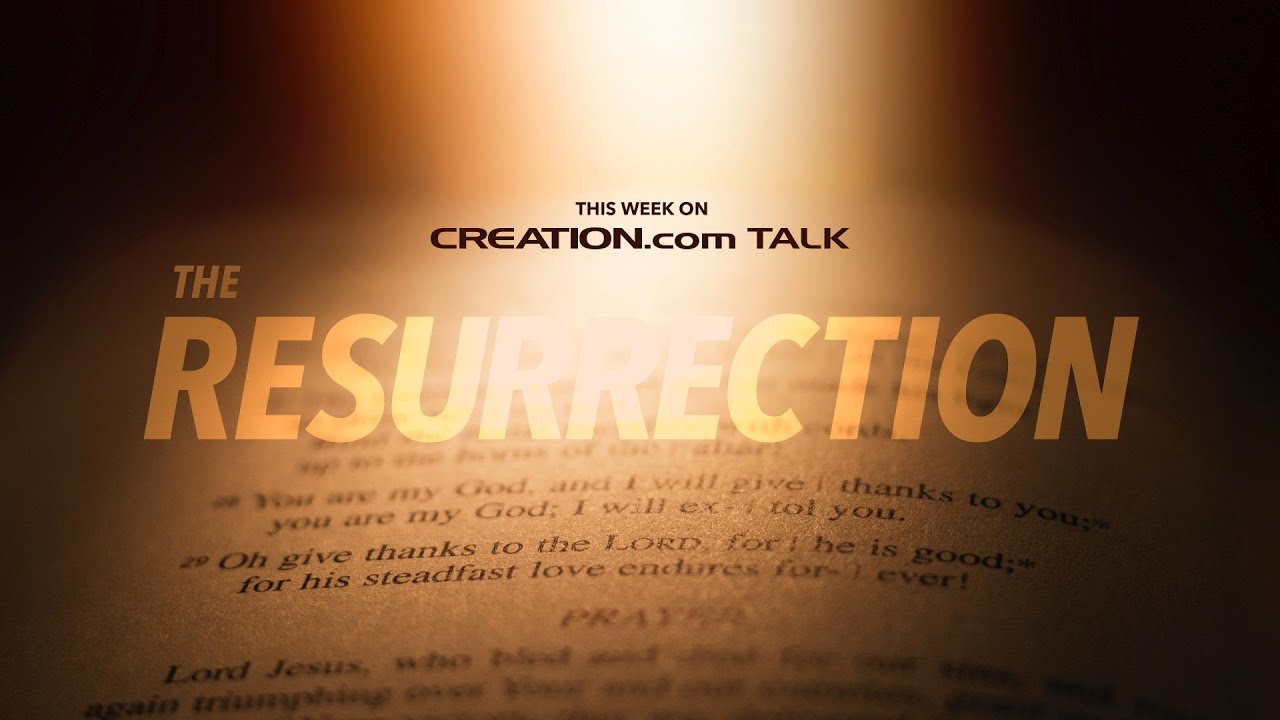 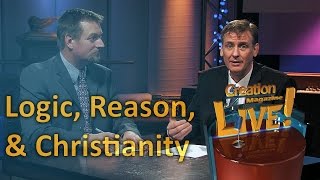 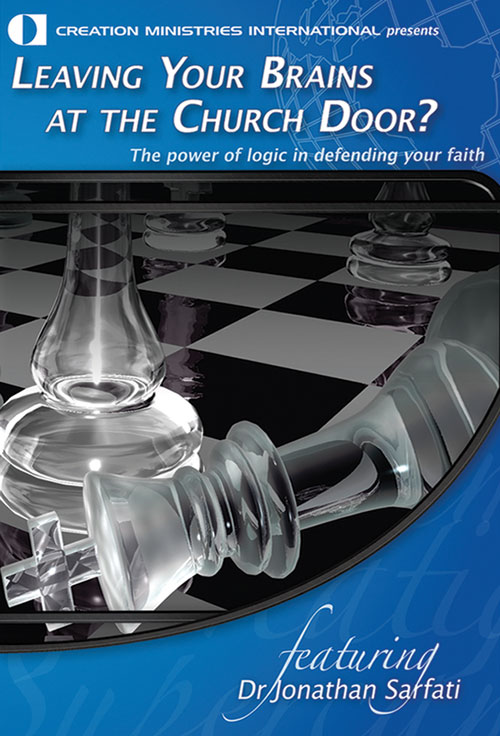 Leaving Your Brains at the Church Door? - 7-Day Streaming
US $1.99
Streaming Video

How Did We Get Our Bible?
by Lita Cosner, Gary Bates
US $4.00
Soft Cover
Fallout! Students explain why they left or remained in church - Sleeved DVD
US $2.00
Sleeved DVD
Christianity for Skeptics
by Drs Steve Kumar, Jonathan D Sarfati
US $13.00
Soft Cover
Leaving Your Brains at the Church Door? - 7-Day Streaming
US $1.99
Streaming Video