People are often perplexed by questions that, once you think a little about them, actually have quite simple answers. Skeptics try to use these ‘problems’ to undermine Christians’ faith, so knowing the answer helps us to ‘give an answer for the hope that is in us’ (1 Peter 3:15). Reuben F. from the U.S. writes:

I have recently been confronted with the claim that God is not perfect because He regretted creating mankind (Genesis 6:6), therefore He makes mistakes, and therefore He is not perfect. This person also used God's jealousy (Exodus 20:5) as an imperfection, his "overreaction" against Sodom and Gomorrah and Lot’s wife, and how He was dissuaded by Old Testament characters, such as Lot and Moses, to not bring destruction as evidence that sometimes even God is in the wrong and needs to be confronted by someone in the right. How does one refute these claims?

Thanks for writing in. There are some very simple answers to all the conundrums you were confronted with, but first some foundational thoughts that are more broadly applicable to these sorts of questions.

We must interpret the Bible’s description of God’s actions in light of what the Bible declares about Him.

Whenever we come to something that is unclear to us in Scripture, we should interpret it in light of what is clear in Scripture. For instance, perhaps the most climactic self-disclosure of God in the Old Testament is when Moses sees God’s back and thus some of His glory, and He proclaims:

“The Lord, the Lord, a God merciful and gracious, slow to anger, and abounding in steadfast love and faithfulness, keeping steadfast love for thousands, forgiving iniquity and transgression and sin, but who will by no means clear the guilty, visiting the iniquity of the fathers on the children and the children’s children, to the third and the fourth generation” (Exodus 34:6–7).

So this is what God is declaring about Himself, so whatever the Bible describes about God must be consistent with that. And when Samuel declares that God has removed the kingship from Saul’s line, he says, “And also the Glory of Israel will not lie or have regret, for he is not a man, that he should have regret.” So God does not experience regret as we do, so we must interpret the Bible’s description of God’s actions in light of what the Bible declares about Him.

So with this in mind, let’s look at the passages in question. In Genesis 6, humanity’s sin and rebellion is spiraling out of control, typified by the sin that results in the Nephilim offspring (see Who were the ‘sons of God’ in Genesis 6? for more information about that). It was actually another attempt to be like gods, as the rebellion in Eden was. God sees that the thoughts of their heart were continually evil. In response, God was grieved to His heart. His heart is responding to their hearts; He feels emotional pain over their sin. This is consistent with the rest of Scripture, where the Holy Spirit can be grieved, for instance (Isaiah 63:10; Ephesians 4:30). As commentator Ken Mathews says:

Genesis 6:6–7 is describing the emotional anguish of God; our verse does not present an abstract statement about God’s decision making. This would be altogether out of place for the intention of the passage, which depicts God as wronged by the presumptuous sin of humanity (Genesis 1:11–26, New American Commentary, p. 342).

God’s response of grief over the making of humanity, however, is not remorse in the sense of sorrow over a mistaken creation; our verse shows that God’s pain has its source in the perversion of human sin. The making of “man” is no error; it was what “man” has made of himself (p. 343).

So the solution to your first conundrum is simply understanding what the text is trying to convey. Second, let’s take a look at Sodom and Gomorrah, and whether it really was an ‘overreaction’ on God’s part.

When God wants to tell us about how He acts or feels, He has to bring it down to our level so we can understand.

The first biblical mention of Sodom is in Genesis 13, when Lot and Abram separated because their herds were so great that the land could not support them together. It says, “Now the men of Sodom were wicked, great sinners against the Lord” (13:13). We have no elaboration so far, but already the city was notable for its sinfulness. Abram was not permitted to take anything from the king of Sodom because of the city’s sinfulness (14:22–24). This happened when Abraham was between 75 and 86 years old (see Genesis 12:4, 16:16). At least 13 years passed (17:25) before God told Abraham He intended to destroy Sodom and Gomorrah because of their sin—presumably God was giving them time to repent of their sin.

Abraham has apparently heard how wicked Sodom is, because he bargains with God not to destroy the city if even ten righteous people live in the city (Genesis 18:22–33). But when the angels go to the city, every single man in the city tries to attack the men together; even being supernaturally blinded did not make them stop looking for the door. This shows the depth of their evil; God was just to judge Sodom and Gomorrah. He shows extraordinary mercy to Lot and his family, taking them by the hand to lead them out of the city and sparing Zoar for their sake. One can only object to God’s judgment of Sodom and Gomorrah if they think He doesn’t have the right to judge at all.

When Exodus 20:5 calls God ‘jealous’, it is not in the sinful sense, but in the positive sense. It is the same sort of jealousy Paul speaks of when he says, “For I feel a divine jealousy for you, since I betrothed you to one husband, to present you as a pure virgin to Christ” (2 Corinthians 11:2). God is zealous for His own honor and glory, and refuses to cede it to false gods. That is a good jealousy, and it is good for us, too, because the false gods lead people astray from the one true Gospel.

Finally, whenever the Bible speaks of God having emotions, or describes God in ‘human’ terms, we have to remember that we can never fully understand God’s mind, because we are human and He is not. So He has to represent Himself in terms we can understand—this is called anthropomorphism (when God is depicted as having a ‘strong arm’ or ‘eyes’), or anthropopathism (when God is depicted as having humanlike emotions). God does act, and He does think and feel, but when He wants to tell us about these things, He has to bring it down to our level so we can understand. 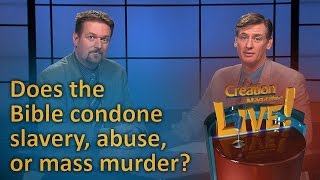