A number of cores have been drilled into the Greenland ice cap (Figure 1). Two of them, GRIP (Greenland Ice Project) and GISP2 (Greenland Ice Sheet Project) are only 28 km apart, and have been discussed in terms of their overall characteristics. Notably, the two cores disagree strongly in their bottom parts, which, according to conventional dating, are said to represent a time period beginning a few tens of thousands of years ago to about 250,000 years ago.1 This article complements Oard’s1 studies by focussing on the numerous discrepancies that occur within the top of the cores, representing the most recent 13,500 alleged years, as opposed to the bottom parts of the core that represent earlier periods of time. It draws on recently published research,2 which attempted to reconcile the two ice-core chronologies over that period. In particular, this paper examines the numerous difficulties in correlating these cores using ‘annual’ counted layers, sulfate-aerosol horizons, and the variation in oxygen isotopes. The variance in one core must be subject to ad hoc contractions and expansions (i.e. ‘accordioned’) in order to force it to fit the variance of other core. The lack of close correspondence between the two cores, especially in large segments (blocs), in spite of their geographic proximity, favours a catastrophic storm-dominated accumulation of the water material in the Greenland ice cap.

A profusion of (usually) visually distinctive layers is visible in the ice cores due to different composition, crystal structure and colouring of the ice. The visual layers in the GISP2 core have now been counted back to allegedly 40,000 years BP (before the present), although it is acknowledged that there are constant, fine-scale counting uncertainties in the 1–2% range. There are, in addition, numerous short breaks due to core loss (usually <10 years), over the inferred period of 3,000–9,000 years BP,2 in which the number of missing layers must be interpolated from the thickness of the lost core sections.

It has previously been documented that the layers present need not be annual as uniformitarians assume.3 Indeed, this fact is unwittingly borne out in the latest study. There are a few centuries of sharp disagreement between the two cores at about the middle of the 13th millennium BP, during which the annual-layer assumption must be waived if a constant mutual δ18O signal is to be supposed:

‘ … then the problem is not missing core or other “block” data loss. Rather, the GRIP core lacks about half the annual layers throughout this interval, or the GISP2 ice contains many subannual structures which mimic annual bands, or the layers are in fact annual but one of the counts is erroneous.’4

Clearly, since the layers are not always annual, the alleged 14,500-year chronologies derived from the GRIP ice cores are only partly based on the actual counting of layers. They also depend upon the correlation of the chemical species of the GRIP chronologies with another core, the Greenland Dye 3 core (Figure 1). In addition, the chronologies rely on an assumed ice accumulation rate (and ice flow thinning estimates) for nearly their first half.2

The mental gymnastics in correlating the cores

Given the inadequacy of counting layers, it is important to consider how these cores are crossmatched with each other, and with other presumed chronological sources of information such as marker horizons. The layers of ice in the Greenland cores contain variations in the oxygen-isotope composition, and attempts have been made to correlate the decadal ‘peaks’ and ‘valleys’ of this variance between cores. Uniformitarians assume the ice accumulated steadily over vast stretches of time and interpret the variance of δ18O as an indicator of past changes in climate. However, the annual to decadal correspondence between the cores, in terms of δ18O variance, is often quite low, in contrast to the high mutual correspondence on a century scale.5

In order to correlate the cores, therefore, one must locate marker horizons shared by both cores. Volcanic acidity (sulfate) spikes are commonly used, but there are unexpected absences of sulfate horizons in parts of certain cores, with acknowledged ‘continuing disagreement’6 on the proper correlation of those sulfate horizons that do occur. Of course, the ‘accordioning’ (distortion of one series to make it fit the other) invoked for the correlation of the cores (elaborated below) enables sulfate horizons that at first seem to be contemporaneous to be displaced by centuries of relative time. And, reciprocally, it enables non-corresponding sulfate horizons to suddenly become candidates for contemporaneity and attendant tie-point status.

Southon’s2 revealing study continues with a correlation of the GISP2 beryllium isotope (10Be) concentration with the Δ14C of the German oak-pine chronologies. These two isotopes are formed by fluctuating extraterrestrial radiation, and the attendant global-scale fluctuations are conventionally believed to be suitable as time markers for correlation. Over the period of 3,400–11,300 BP, the variance of the beryllium isotope leads that of the tree-ring record by 80 years, but a close examination of the data makes it obvious that this offset is actually an average. Finally, beyond 11,300 years, the 10Be is highly perturbed, and this is blamed on large changes in ice accumulation patterns.

As for the 80-year average multi-millennial 10Be offset, examination of the relevant graph6 shows that some of the variance is not particularly distinctive, and one could envision alternative correlations of some of the prominent ‘peaks’ and ‘valleys’. Furthermore, the ‘tie lines’ between the two series are neither one-on-one nor even self-consistently offset from core to core. They have variable slope (meaning variable years of offset), with these inferred offsets reaching 200 years for some millennia. In other words, a series of ad hoc expansions and contractions (‘accordioning’—the term used by Southon) is required to correlate the two series. With the imposition of sufficient accordion-like contortions, one could theoretically get any series to ‘match’ any other series. This is illustrated in Figure 2.7 In this example the two series can be ‘harmonized’ by using ‘tie lines’ of variable slope despite the fact that the two series are nothing more than random numbers.8

The subjective, in fact contrived, nature of the correlations becomes even worse when one compares the δ18O variance, between GISP2 and GRIP, for the 1,800 BP–5,200 BP interval.9 A ‘dance’ of constantly changing offsets is required to correlate the two sections. There are six intervals of time, each ranging between about 300 to about 700 years, with each interval manipulated to a different degree of ‘accordioning’. The respective offsets for the six time segments, GRIP relative to GISP2, are:–20 years, an indeterminate number of years, either–5 or +100 years,10 +80 years, +35 years, and +50 years. It is not just a matter of massaging the data, but of butchering the data to make it fit conventional uniformitarian ideas!

The situation is no better when the correlation is examined over the inferred time interval from 11,500 BP to 13,500 BP. This time, the distortion of one series to fit the other is such that the GISP2 δ18O variance flexibly leads that of GRIP by a range of 80 to about 200 years. An especially prominent ‘accordioning’ between the two cores is centred at about 12,500 BP in GRIP. The condensed (270 year) 12,400 BP–12,670 BP interval in GRIP is believed to correlate with the expanded (400 year) GISP2 interval occurring at 12,500 BP–12,900 BP.10 Even then, the correspondence of ‘peaks’ and ‘valleys’ is not particularly convincing.

Some cold facts on δ18O

Uniformitarians try to correlate the decadal ‘peaks’ and ‘valleys’ in δ18O between cores because they assume the variation is due to past climate changes. However, oxygen isotope ratios can be readily altered by other means, as an inadvertent experimental error made very clear. Stuiver et al.11 report that the polyethylene bottles used to store the melted core ice had unknowingly been replaced by another brand. Owing to changes in barometric pressure, these new polyethylene bottles, when capped, could still ‘breathe’ through their surfaces, causing minute quantities of modern oxygen to diffuse into the bottles. This subtle, unexpected source of contamination distorted the measured δ18O values of the water from the icecap.

Despite the extreme sensitivity of oxygen isotope ratios to external perturbation, we are asked to believe that the δ18O composition of the ice cores has not changed since they were deposited, despite the passage of thousands of years or more!

Clearly, the uniformitarian chronologies developed from measured δ18O variation tacitly assume that the isotopic composition of the snow remained completely stable long after it has fallen and that it was not affected by subsequent diagenetic alteration. Despite the extreme sensitivity of oxygen isotope ratios to external perturbation, we are asked to believe that the δ18O composition of the ice cores has not changed since they were deposited, despite the passage of thousands of years or more! It is high time that the assumption of diagenetic unchangeability for snow and ice layers be re-examined in the light of high oxygen isotope mobility.

According to conventional uniformitarian beliefs, the Greenland ice cores formed in a polar environment very much like the one at present, where snowfall is usually light and infrequent. Since snowstorms are believed to be relatively rare, the cores are supposed to consist primarily of ‘light dustings’ of snow, which accumulated steadily over vast stretches of time.

Creationist models, on the other hand, posit that the ice caps accumulated from snow that was deposited rapidly from large snowstorms, which occurred many times each year. The conspicuous bloc to fine-scale irregularities observed in the Greenland cores, and the attendant difficulties in correlating them, are obviously more consonant with a catastrophic creation model than a uniformitarian one. The fact that the GISP2 and GRIP cores show significant discrepancies as recently as AD 2009 indicates that major climatic adjustments probably occurred for thousands of years after the Flood.

It is well known that the effects of severe snowstorms can vary markedly over a large geographic area. One area may receive tens of centimetres of snow while an adjacent area, only a few tens of kilometres away, may get hardly any. On this basis, and given the premise that most of the Greenland snow was not formed by yearly accumulation but from numerous snowstorms, it is hardly surprising that even the 28 km distance between the GRIP and GISP2 ice cores is sufficient to reveal significant discrepancies, especially at small inferred temporal scales. Most of the early post-Flood snowstorms must have been very large and intense,12 depositing snow over most of Greenland and beyond. Yet some storms were probably not so extensive and their snowfall would have been geographically more selective. In time, a series of unusually localized snowstorms must have caused entire segments of the respective ice cores to become ‘out of step’ in bloc fashion, accounting for the ‘accordioning’ necessary to force one ice core chronology to even approximately correlate with another.

Of course, the entire foregoing discussion assumes that the correlations between the two Greenland ice cores are approximately correct in terms of relative time.13 However, the attendant subjectivities involved in correlating the cores (especially when ‘accordioning’ is freely invoked) should stimulate creationist research into alternative, relative-time compressed correlations of these and all of the world’s ice cores. 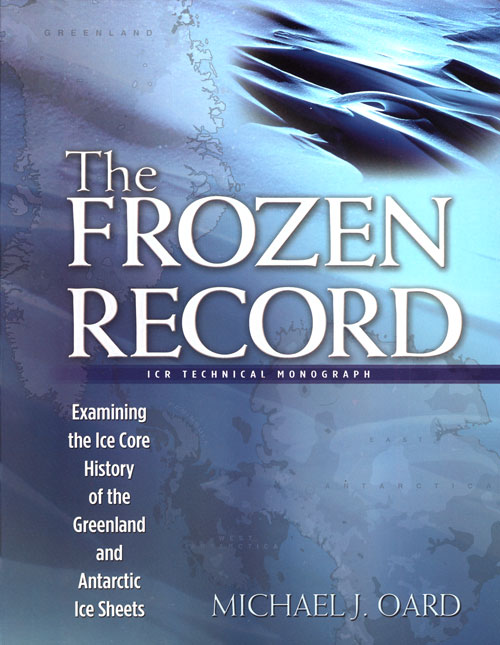 The Frozen Record
by Michael J Oard
US $20.00
Soft Cover

The Frozen Record
by Michael J Oard
US $20.00
Soft Cover