It may seem strange to hear that we should be grateful to spiders for making our life on earth possible, but it is certainly no exaggeration. Without these tireless, insatiable hunters, we would be literally suffocated out of existence, if not actually eaten alive, by all manner of bugs.

About 50 years ago, W.S. Bristowe determined that an acre of average meadowland is home to around two million spiders. In England alone, these heroic predators consume, year in and year out, an annual weight of insects equal to the combined weight of the English population!

So there is no reason to despise and destroy spiders—in fact, quite the opposite. Admittedly, coming unexpectedly upon a huge spider scurrying along on its eight, overlong, bristly legs will usually provoke a significant avoidance response, to say the least—like seeing a snake. Of course, such a reaction makes good biological sense—the bite of either can be dangerously poisonous.

There are spiders whose venom is far more deadly than that of a rattlesnake’s. Fortunately, the poison fangs of these spiders are too small to penetrate our skin and inject this substance directly into our bloodstream. Spiders do not in any case manufacture large quantities of venom, so only a few varieties are dangerous enough to be fatal to humans.

In fact, such eight-legged scampering should really cause more wonder than fear; more amazement than loathing. Consider how long it takes a human infant to learn to coordinate walking on only two limbs without stumbling or falling. Then consider the spider’s feat in coordinating eight limbs during such speedy and efficient motion—such perfect coordination that the legs never stumble or trip one other.

Computer technicians would find it exceedingly difficult, if not impossible, to construct an eight-legged walking machine that could move its artificial limbs with such brilliant and rapid co-ordination as the scurrying of the humble spider. Such a robot would need to be able to instantly adapt its movements to the slightest obstacle, the tiniest unevenness or any other conceivable hindrance. To do this, these artificial legs would need to instantly register such obstacles, by means of tactile and/or optical sensors. This information would then need to be transmitted to a processing unit, corresponding to the brain of a living spider. This would need to carry out split-second calculations to process all the different items of information to avoid tripping, stumbling or falling, and respond instantly with appropriate and separate commands for each of the many joints of these legs.

Naturally, there would then need to be a feedback system, transmitting information about the successful outcome, or otherwise, of such events as manoeuvres undertaken to avoid an obstacle. If unsuccessful, a new strategy would need to be formulated in an instant.

Such a computerized control system would need to incorporate a ‘fully nutted out’ program, containing coded information for the appropriate countermeasures for every possible problem affecting gait. Similar to a chess-playing computer, all the possibilities would need to be worked through instantly in order to find and activate the one countermeasure appropriate to that situation.

This technological problem would become immeasurably greater if our artificial spider should now be required to move around on a free-hanging web made of incredibly thin threads. The program would need to be able to cope with all conceivable possibilities—the fluttering of this gossamer web in the breeze, sliding on the web, even slipping and losing grip (and having to regain it) with one or more of its legs.

Could human intelligence and imagination even begin to anticipate all such combinations and permutations of possibilities? And we haven’t even begun to discuss the technological problem of equipping the limbs with electro-motors to move each joint, at just the right moment and with just the precise amount and direction of movement required in each split-second. 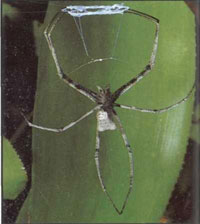 Actually, walking and climbing are some of the least impressive tasks in the spider’s masterful repertoire. In its hindquarters is a fully automated chemical factory with a fully equipped spinning-plant.

A common garden spider (the cross or diadem-spider, Araneus diadematus is referred to here) uses its six glands to manufacture five different types of web-spinning fluid. Mixing various combinations of these proteinaceous substances like an experienced pharmacist enables the spider to make exactly the right construction material for the particular type of thread needed at that moment. This ability to vary the mix, and thus the resulting raw material, is necessary because the highly tensioned threads that anchor and frame the web, for example, need to be thicker than the delicate capture-network and also proportionately much stronger and more resistant to tensile (stretching) rupture. The spokes and the spiral network threads, on the other hand, have to have much more elastic ‘give’—which means they must have quite a different chemical make-up. Other special glands are used to make the incredibly sticky glue with which the spiral ‘capture network’ is finally coated.

Incidentally, this remarkable web fluid, which immediately hardens on contact with air, doesn’t just come out of holes like a watering-can. Instead, it is pressed out of as many as 600 tiny tubes, each of which gives rise to an incredibly thin fibre. Even here, the spider is able to exercise choice; for making a thin spiral thread, it uses far less of these tubes than for making a thicker framing thread.

The ultra-thin fibres are not just pressed together, but are twisted together in the finished product for extra strength—just as a steel rope has more strength than its individual fibres would if they were just bundled together. Amazingly, this enigmatic ‘spider satin’ has both greater elasticity and greater tensile strength than steel. Its thickness varies from a hundredth to only a thousandth of a millimetre—you would have to weave about 200 ordinary strands of it together to reach the thickness of a human hair.

To make its web, the garden-spider has to manufacture 20 metres of thread and tie about a thousand knots during construction. The final product, so artistic and functional, nevertheless weighs barely half of a milligram! (A milligram is 1000th of a gram or about l/28,000th of an ounce). The construction of this web appears to be planned and calculated down to the last detail. All such garden-spiders follow the same plan, which is adhered to step by step, as if meticulously formulated on a drawing-board. First the anchoring of the framing cables, then the laying and tensioning of the spokes, the laying down of an auxiliary spiral from the centre to the outside, and finally the production of the sticky capture spiral, in exactly the opposite direction—all have the appearance of artful planning.

This construction plan does not overlook the fact that the web must be at a slight angle away from the vertical. Its eager weaver works only from the underside, otherwise the slightest slip would mean it would be caught in its own trap. Even a ‘safety rope’, which constantly connects the web-builder to its web (ensuring that one slip does not mean a plunge into the bottomless abyss, so to speak) is not forgotten in this remarkable plan.

A spider does not have to learn any of its remarkable craft. All its skills, including the ability to rapidly dispatch its prey with its sharp fangs designed like hypodermic syringes, are present from the moment it leaves the egg.

Neither the combined knowledge nor all the cumulative years of experience of the world’s greatest specialists in computer technology would begin to suffice to construct a computer able to simulate all the achievements of the humblest garden spider, let alone with the same degree of miniaturization. To say nothing of having to use only dead insects as both energy fuel and raw building material!

Even if such an impossibility were to be achieved, such a spider-computer would require an extraordinarily complicated program in order to be able to operate. But programs, that is, coded information in stored and retrievable form, are known to us exclusively as the product of mind. They presuppose a high degree of intelligence and ‘know-how’. Surely no one living in this computerized age of information technology would maintain that such things come about by chance, by themselves.

One more thing: Every spider successfully achieves a hundredfold that which no cleverly designed spider computer made by man could ever do, which is to bring forth copies of itself, to form seeds which grow to become equally well-programmed computers!

One could go much, much further in demonstrating how vastly superior this living computer, the spider, is over all our science and technology. Even these few insights, however, raise a decisive question. Since chance, as an explanation for the origin of such superlative achievements, is completely ruled out, from what infinitely wise plan, then (of necessity greatly exceeding all our human intelligence) have they arisen?