New documentary: Dismantled: A Scientific Deconstruction of the Theory of Evolution
The online premiere has ended, but you can order the DVD or Blu-ray here.
Facebook Twitter Pinterest Reddit LinkedIn Parler Gmail Email App Print

The cover of a recent issue of the journal Nature featured a photograph of two human-like skull caps, the smallest of which has upset the human evolution applecart. This skull is being hailed as the first female specimen of a Homo erectus cranium. Its small size (compared to other H. erectus skulls) is claimed as evidence that it was an ancestor species with much greater behavioural similarity to today’s great apes than was thought.1

The same paper reports on a partial jawbone, assigned to Homo habilis, which the authors claim ‘reliably demonstrates that this species survived until later than previously recognized … ’ upsetting the human evolution story still further. While many evolutionists have long argued that H. habilis (sometimes dubbed ‘handy man’) evolved into H. erectus, this international team of palaeoanthropology experts is now saying that the two species lived side by side with one another for half a million years! The discoverer of the fossils, Frederick Manthi (of the National Museums of Kenya, Nairobi) reportedly said: ‘Homo habilis never gave rise to Homo erectus. These discoveries have completely changed the story.’2

The usual evolutionary story upset (summary)
The most common ‘neat’ story of human evolution has australopithecines (such as ‘Lucy’) evolving into Homo habilis, which evolves into Homo erectus, which evolves into Homo sapiens. Australopithecines have no clear connection to humans, but museums, popular articles and text-books for schools and universities commonly claimed that Homo habilis linked them with humans (Homo erectus and Homo sapiens). While one camp of paleontologists argued that Homo habilis was not a valid taxon, being a waste bin of mixed ape and human fossil bits, other evolutionists clung to H. habilis as being valid. Now even those who still claim it was valid are putting it aside. That effectively leaves a gaping hole in the story of human evolution, with nothing left to link humans with apes.

Of course, this all goes to reinforce the point made in many previous articles on this website:3 there are plenty of fossils, but the fossil evidence used to support human evolution from ape-like ancestors is so sparse that any new scrap of bone has the potential to force a rewrite of the secular history-tale. Accordingly, one commentary on the new paper states, ‘Exciting new Kenyan fossils challenge established views on early evolution of our genus Homo.’4 That said, what other lessons can be learned from this latest report?

Certainly, it is pertinent to highlight the assumptions involved in all evolutionary reconstructions of the vanished past, chief of which is that humans and apes allegedly have sprung from a common ancestral lineage. Researchers constrained by this evolutionary belief are bound to view the fossils as fitting somewhere on a long-ages continuum between supposedly ‘primitive’ ape-like creatures and ‘modern’ humans. For instance, H. habilis has long been seen by many (though not all) palaeoanthropologists as a bridge species between the clearly ape-like australopithecines (such as the famous ‘Lucy’) and the human-like H. erectus. The latter fossils are considered by most creationist experts to represent the remains of fully human descendants of Adam.5

Within the evolution camp, the paucity of evidence leaves plenty of room for disagreement. So, while some have argued that H. habilis is really a taxonomic waste bin which should be discarded (containing a mixed bag of fossils from both Australopithecus and Homo6 ), others have clung to it as the only—albeit tenuous—link between extinct apes and humans. Creationists such as Lubenow have also argued that H. habilis is an invalid category.7 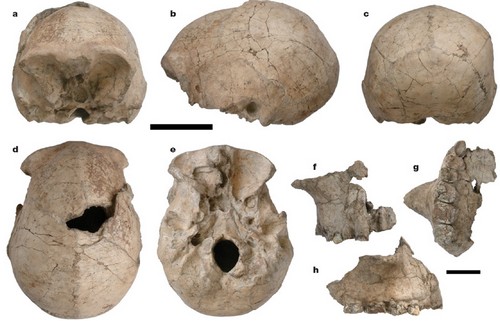 This new paper—by a list of authors including leading lights such as Fred Spoor and Meave Leakey—represents a divergent opinion: the authors accept that H. habilis was a real creature in history but relegate it to a mere side-shoot off the main branch that led to ourselves—that is, it is not our ancestor. In support of this view, the authors report that the H. habilis maxilla8 was ‘dated’ at 1.44 million years old which is younger on the evolutionary timescale than the H. erectus skull (‘dated’ at 1.55 million years). Thus, whether H. habilis is seen as a junk category or a contemporary of H. erectus, the outcome is the same: the evolution of australopithecine apes into humans is an article of faith, unsupported by any fossil evidence—just speculation that an unseen common ancestor of these two ‘sister species’ lived in this part of Africa some two to three million years ago. Interestingly, well before this latest publication, creationist Lubenow had already pointed out the contemporaneousness of H. erectus and H. habilis, based on the evolutionists’ dating of existing fossils:

It’s good to see the evolutionists catching up with their own reality.

The new report should prompt another salutary reminder, repeated many times over during the dubious history of palaeoanthropology: ‘Wait and see!’ Doubtless there will be responses to these new ideas from other experts who interpret the skull and jawbone evidence very differently. For instance, it seems very premature for these scientists to be confidently challenging the current wisdom on the behaviour of H. erectus based on the discovery of what they claim is the first female skull of this species.

Firstly, it is very likely that other researchers will challenge the assigned gender of the individual to whom this skull belonged—this happened most recently with Homo floresiensis, aka the ‘hobbit’.10 Not only do the authors claim (on the basis of a single specimen11 ) that this demonstrates pronounced sexual dimorphism12 within H. erectus, they offer the baseless speculation that, since male apes are distinctly larger than females and mate with multiple females, H. erectus likely was sexually promiscuous (rather than monogamous)!

’Handy man’ has now been irrevocably removed from any place in the evolutionary human lineage (whichever ‘camp’ of evolutionists one looks to).

Secondly, we are all familiar with the wide range of variation in size and shape of skeletal and cranial features among people in the human population today—this is blindingly obvious from even the most cursory observation of a crowd of people from any cosmopolitan city. Human skull capacity is reported to show a 700 to 2,200 cm3 variation in normal individuals.13 Moreover, consider dwarfism and giantism in human beings, for example the recently reported marriage between a giant 236 cm (7’9”) man and his 168 cm (5’6”) bride.14 It is small wonder that when evolutionary palaeoanthropologist Owen Lovejoy published his findings of 1,000-year-old native American bones, he concluded that the marked size differences could lead some to conclude that they represented different species or even genera.15 Thus it is extremely premature to claim that the discovery of one small skull points to H. erectus being less human-like than once thought. Indeed, one has to wonder if this story about the H. erectus skull has been included to encourage the faithful that all is not lost; there are still potential candidates to at least partially fill the void left by the exit of H. habilis. That is, this gives breathing space for the acceptance of the demise of Homo habilis.

It is likely that those who follow the ‘progressive creationist’ model of Hugh Ross and his associates will seize on this new interpretation as evidence for their contention that H. erectus represented a pre-Adamic soul-less race of man-like creatures, unrelated to Adam.16 Yet to do so, they must continue to ignore the wealth of evidence to the contrary—not least the continuity of erectus-like features up to the present day (seen in certain people) and the fact that evolutionists’ dates for a number of H. erectus skulls mean that they were also contemporary with ‘modern’ humans.17

This new paper strengthens the view that there are fossils of apes (including extinct varieties) and fossils of humans but nothing in between, just as a straightforward reading of Genesis implies: ‘So God created man in His own image; in the image of God He created him; male and female He created them.’18 ‘Handy man’ has now been irrevocably removed from any place in the evolutionary human lineage (whichever ‘camp’ of evolutionists one looks to). As for the controversial claims concerning sexual dimorphism in Homo erectus, ‘watch and wait’ would seem to be wise counsel.

Apemen: ‘Missing Links' & The Bible
US $10.00
DVD
Your subscription already exists. We have sent you an email that will allow you to update your details.
Thanks for subscribing