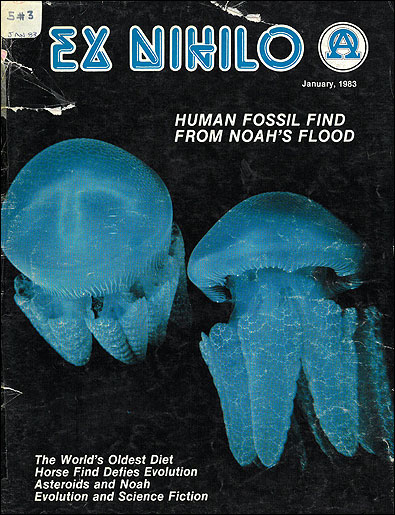 Most evolutionists believe that millions of years ago three-toed horses evolved into one-toed horses. Pictures (* similar to the above) appeared in the National Geographic of January 1981, p.74. The article associated with the pictures describes an excavation in Nebraska. The remains of thousands of animals buried in a single volcanic eruption were dug up—a ‘prehistoric Pompeii’ the title proclaimed. The photos show a fossilized hoof of a one-toed horse and that of a three-toed horse. Both were trapped in the same eruption. The convincing caption in National Geographic reads: ‘An evolutionary moment is frozen in time Complete skeletons of the horse Pliohippus verify the transition of primitive three-toed variety to the one-toed type ten million years ago.’

Millions of readers of National Geographic would no doubt have been impressed by this ‘proof’ of evolution and not given the matter any further thought. But what does this evidence really show?

Clearly, the one fact that is ‘verified’ is that three-toed and one-toed horses both existed at the same time. Both specimens were trapped in the same volcanic eruption, in the same locality, ‘frozen in time’. This hardly supports the idea that one type was the ancestor of the other!

Creationists have long pointed out that the arrangement of the fossils in ‘horse evolution’ exhibits has been a contrived sequence, and that there was every reason to believe that the various types of horses lived at the same time. Had these two fossils been found in separate localities, they would no doubt have been displayed showing the three-toed one as ‘older’ than the one-toed.

Finding them together like this is in reality an embarrassment to the idea of evolution. It most certainly does not verify any sort of ‘transition’.

* We regret that National Geographic could not grant us permission to reproduce the original photos.