Pastor Mark asked the men at the retreat what their favorite animal was. One called out, “Lion!”; another, “The eagle!” Stunned silence followed when I exclaimed, “The hummingbird!” Apparently that answer was not ‘manly’ enough. Mark chided, “It figures that would come from you, Gillis! Why in the world would you pick the hummingbird?” In a ‘glad you asked’ tone, I told my friends about God’s amazing design of the hummingbird.

It would be enough to only mention the obvious: the incredible speed at which this tiny bird flaps its wings. When hovering, the wings beat at 50–80 flaps per second,1 even increasing to as many as 200 during a short courtship chase. They utilize a figure-8 pattern, you might say ‘treading air’, in which the wings flap forward and backward, generating lift with both motions (75% on the forward stroke and 25% on the back stroke2). This is very unlike the ‘up and down’ motion of most birds with typical airfoil wings. This unique ability to hover precisely in one position, and fly backwards or take off vertically, was not completely understood until recently. Although wing speed seems to make their wings disappear, high-speed video cameras were able to capture the intricacy of this flapping pattern (to see an incredible slow-motion video, go to creation.com/media-center/youtube/flight-the-genius-of-birds-preview).

The ultra-flexibility of the hummingbird’s unique wing strokes requires a very specialized design—not just of the bones, muscles, and tendons but also of the brain and nervous system controlling them. The flexibility of the shoulder joint is a unique design, allowing the wing to twist into extreme positions not found in other birds. However, unlike the wing structure of all other birds, the ‘elbow’ and ‘wrist’ joints are rigid, making the wing more like a stiff paddle.3 The relatively huge breast muscles that manipulate the rapid wing flaps represent a massive 40% of the bird’s total weight.3 Millions of dollars have been unsuccessfully invested in biomimetic engineering attempts to duplicate this complex system of bio-mechanical wonders. However, evolutionists believe that random mutations, natural selection, and millions of years can do better than brilliant engineers. It makes more sense to explain the brilliant hummingbird design as created by a brilliant divine Designer.

The term ‘eat like a bird’ takes on new meaning when you consider the fuel required to keep this relentless powerhouse churning for seemingly endless stretches of flight. The metabolism of the hummingbird is the highest among all vertebrates.4 When active, its heart rate is up to a staggering 1,200 beats per minute, while the respiratory rate even at rest is up to 250 breaths per minute.5 To support such ‘breathtaking’ metabolism, this marvel must eat almost constantly to get the energy needed. Every day, it extracts nectar from up to 2,000 flowers.6 If humans were able to operate at their energy level, we would have to ingest almost 1,300 hamburgers a day just to keep up. Furthermore, “our hearts would beat 1,260 times a minute and our body temperature would rise to 385°C [725°F] and we would burst into flames”.7 Although nectar is the main fuel source to keep the bird’s metabolic engines ‘humming’, it also eats the occasional insect for protein.

Even the hummingbird’s tongue used to gather this nectar (more than its body weight,8 in a mind-boggling number of sips per day) is such a complex design that it seems difficult to conceive how it could ever be explained by slow and gradual steps as required by evolution. Until 2010, most biologists believed the hummingbird tongue operated by simple capillary action, like ‘wicking’. However, biologists from the University of Connecticut discovered that the tongue works more like a micropump.9,10 The hummingbird tongue is about twice as long as its beak, allowing it to probe deep into flowers. It is composed of two long narrow tubes that ‘unzip’ in segmented flaps when in contact with liquid nectar. Then the flaps retract to ‘pump’ the nectar, in less than 1/20 of a second, in rapid succession, thousands of times each day. You can see a fascinating animation of this incredible mechanism in the documentary Flight: the genius of birds.11

The evolutionary explanation of slow, step-by-step addition and modification of these components over millions of years also fails to explain the way these birds’ design has solved a daunting challenge presented by the laws of physics. You see, the blindingly fast flapping and twisting motion of the wing structure generates an incredible amount of friction, and thus, heat (in addition to that of muscle metabolism). For comparison, fast man-made machines need sophisticated cooling systems. The brisk flapping motion allows these birds to dissipate all that generated heat from their body across their rapidly fanning wing. Other modes of heat dissipation include rapid air respiration, heat exchange through the skin and bill, and water bathing.

The term ‘eat like a bird’ takes on a new meaning …

In researching this remarkable bird you will come across many claims such as: “Hummingbirds evolved to display unique adaptations and anatomy allowing them to survive.”12 Evolution cannot explain the appearance of the first bird, nor how a slow process of gradual adaptation brought about all the complex structural components needed to hover and extract vast amounts of energy from flowers, all with wonderful and awe-inspiring precision and beauty.

My friends’ stares and chuckles turned into nods of amazement and agreement as I summarized some of the unique design and extraordinary features that make the hummingbird unlike any other of God’s creatures.

After viewing the amazing hummingbird in flight, it is a surprising sight to discover a strangely similar creature called the hummingbird moth (or hummingbird hawkmoth, picture right). These moths hover, fly and move in an almost identical manner to hummingbirds. They emit a similar audible humming sound, hover in front of flowers, unroll their long proboscis and insert it into flowers to sip nectar. Some even mistake these insects at first glance for a small hummingbird. Can ‘convergent evolution’ explain the bizarre behavioural similarities? This is the idea that evolution happened to independently ‘converge’ upon the same outcomes—not an explanation so much as a hand-waving appeal to countless coincidences during their very different alleged evolutionary histories.

Of course, the actual differences between this bird and insect are almost innumerable. Just for starters, the hummingbird moth does not have feathers, while the hummingbird’s mechanical wing structure, skeletal, circulatory and respiratory systems are utterly different. Evolution is firmly based on the concept of common descent, but no reasonable evolutionist would propose that these particular similarities can be explained by a common ancestor for this amazing bird and insect. What would be a more logical explanation for similar functional design? A common Designer. 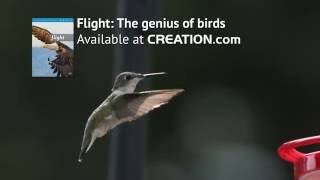 Flight: The genius of birds preview