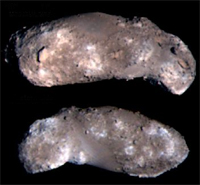 The visit to the small asteroid Itokawa by Japan’s Hayabusa spacecraft in November 2005 has left planetary scientists puzzling over its origin.1,2

Because of its small size (535 metres long), they had expected that the asteroid would be a single chunk of rock, unable to hold smaller pieces to itself.  But images from the spacecraft show Itokawa’s surface is littered with boulders and gravel.

The answer, of course, is that there haven’t been space rocks colliding with Itokawa for millions of years.

‘Everything we suspected about it turned out to be wrong,’ said Erik Asphaug, a University of California planetary scientist.  For example, measurements of the asteroid’s gravity field show Itokawa is 40% porous (i.e. filled with empty space).

‘That is astonishing,’ says Asphaug, explaining that sand has a porosity of 20%.  ‘It’s very hard to get porosities greater than that.  You’ve got to start balancing things delicately, like you were building a house of cards.  The only way to do it is to gently pack the stuff together.’

So it’s now being suggested that the Itokawa ‘loosely packed pile of rubble’ collected after a collision between asteroids.  But, as Asphaug points out, there’s a problem—repeated impacts with other space rocks over millions of years should have made Itokawa denser.

The answer, of course, is that there haven’t been space rocks colliding with Itokawa for millions of years.  The heavens were indeed built, at the same time as the earth, only around 6,000 years ago.