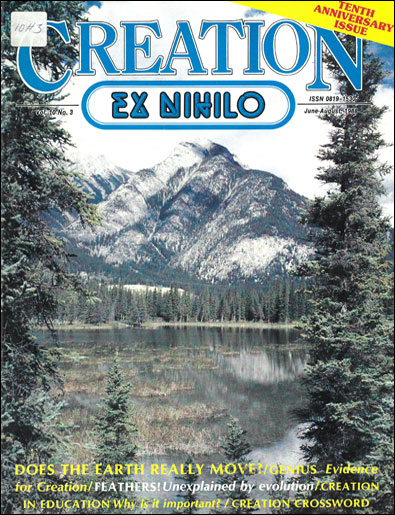 Is creationism important in education?

At least two generations of our young people have been indoctrinated by an education system steeped in evolutionary humanism. Where has this led, and does the result matter?

Any survey of the doctrinal statements of evangelical schools and colleges will reveal that very few include an article on special creation (as opposed to theistic evolution) in their tenets. Some may include a brief statement about the creation of man, but that’s about all. No accrediting agency in the United States (as far as we know) had a creationist statement until the formation in 1979 of the Trans-National Association of Christian Schools (TRACS). Very few churches or denominations include any such tenet in their articles of faith.

These facts indicate that most Bible-believing Christians in this century have come to regard the doctrine of biblical creationism as either indefensible or unimportant (probably both). This has resulted not only in the complete capture of our public schools by secular humanism, but also has led to an increasingly compromising approach—not only on evolution but on many other salient doctrines and practices of traditional biblical Christianity—by large numbers of ostensibly Bible-governed schools and colleges. Pressures towards conformity and uniformity imposed by secular accreditation bodies, though often denied, are very real, and the impact becomes increasingly obvious with the passing of time.

The truth is, however, creation as taught in the Bible is vitally important in true Christian education. It should be considered, in fact, as its foundation! Furthermore, it is based on much sounder scientific evidence than the idea of evolution.

For many years now, courses in practically every discipline in the natural sciences, the social sciences and humanities—even religion courses—have been structured around evolutionistic premises. The very concept of special creation as the true explanation of origins and meanings (or even as a possible alternative explanation) has been effectively banned from public educational institutions at all levels.

Even though America and its schools were founded on a framework of Christian creationism, evolutionary humanism has now become—at least in the media and in academia—our quasi-official state religion. Our young people have been brainwashed in this system for at least two generations, and its bitter roots are now bearing the bitter fruits of widespread amorality, materialism, the drug culture, abortionism, pornography, social diseases and a host of other ills—not to mention communism and fascism—and the intellectual apologists for all of these practices rationalize them in terms of their evolutionary premises.

Sad to say, evolutionism has even infected many Christian institutions, sensitive as they are to ‘academic peer pressure’. Whether they have capitulated to overt theistic evolution and theological liberalism, or have tried to fence-straddle with ‘progressive creationism’, or (worst of all) have ignored this foundational issue altogether by concentrating only on ‘personal Christianity’, the result has been an almost complete takeover of our education system by secular evolutionary humanism.

If the Word of God is, indeed, inerrant and perspicuous, as evangelicals and fundamentalists profess to believe, then it should be obvious that the fact of creation is the foundation of all truth and reality. That is why God put it first in the Bible! It should certainly be foundational in true education, and it is surprising and even frightening that so few Christian institutions include it as one of their doctrinal tenets.

If God’s Word cannot be trusted and understood in Genesis, then why should we bother with it anywhere else? All of Scripture stands or falls upon the reliability of its foundational chapters. As Jesus said: ‘If ye believe not [Moses’] writings, how shall ye believe my words?’ (John 5:47).

Just as evolution is the foundation of humanism,1 so special creation must be the foundation and integrating framework of all curricula and courses in a true educational system.

Such education can only be accomplished in genuinely Christian schools, for Christ is Saviour as well as Creator, and every subject should be interpreted in the light of His divine works of creation, conservation and consummation. The threefold work of the Lord Jesus Christ—past, present and future—is most clearly set forth in Colossians 1:16–20. ‘By Him were all things created’. ‘By Him all things consist’. ‘Having made peace through the blood of His cross, by Him to reconcile all things unto Himself’. All of this is said to be included in ‘the gospel’ (Colossians 1:5, 23), which is to be preached in all the world.

Note that creation was the past work of Christ; His work of creating was finished (Genesis 2:1–3; Hebrews 4:3) at the end of the sixth day of Creation Week. It is no longer continuing, as evolutionism would require. There is simply no legitimate way to accommodate evolution in biblical Christianity.

The doctrine of special creation is thus the very foundation of the Gospel and true Christology. It is also the foundation of the living, saving faith (Hebrews 10:38, 39), described in detail in the great ‘faith’ chapter of Hebrews 11. The very first object of faith in this chapter is the special creation of all things. ‘Through faith we understand that the worlds were framed by the word of God, so that things which are seen were not made of things which do appear’ (Hebrews 11:3).

Furthermore, although the modern scientific establishment is largely committed to evolutionism, the foundations of modern science were laid by creationist scientists—men such as Johann Kepler, Sir Isaac Newton, Robert Boyle, John Ray, Nicolaus Steno and other great ‘founding fathers’ of science. As a matter of fact, the very premises of the scientific method—causality, observation, objective reality, meaningful reliability in nature—are founded in the creation and control of the world by God. In the case of the American nation, its educational and political institutions were in fact originally established on creationist principles.

There are many Christians who realize the dangers and fallacies of evolutionism, but who still feel that science requires us to believe in the geological ages. They therefore are willing to give up. It is surprising, and even frightening, that so few Christian institutions include creation in their doctrinal tenets, the strict creationism required by the literal meaning of the creation record in Genesis 1. The ‘days’ of Genesis are then interpreted roughly as the ‘ages’ of the geologists and the astronomers, with acts of special creation interjected at certain times into the normally uniform multi-billion year course of cosmic history.

This interpretation is also known as ‘progressive creationism’ and, unfortunately, is advocated today by most evangelical colleges and seminaries. Some still advocate the ‘gap’ theory, which attempts to pigeon-hole the vast ages of the evolutionists into a presumed time gap prior to Genesis 1:2. Both of these interpretations are usually combined with another accommodation, the ‘local-flood theory’ of Genesis 6–9. This further accommodation to scientism is necessitated because a universal cataclysmic Flood in the days of Noah would necessarily preclude the very concept of the geological ages.

Such interpretations are dangerous compromises. The Bible clearly teaches a literal six-day creation and a global Deluge. Any attempt to harmonize the creationist worldview with the evolutionary worldview is, as history proves, a one way street, ending in a precipice. The fact that many good Bible expositors accept such compromises is irrelevant, since these teachers have persistently failed to deal with the compelling biblical and theological evidence against them. As a result, multitudes of schools and other Christian institutions have, during the past two centuries, travelled this route of compromise and apostasy, which inevitably begins with the rejection of strict, recent, literal creationism.

The word ‘day’ (Hebrew yom), as used in Genesis is clearly defined the very first time it occurs in Genesis—‘God called the light Day’ (Genesis 1:5). The still-continuing observance of one day in seven as a day of rest in commemoration of God’s rest on the seventh day, is a silent weekly reminder that God’s work week, like man’s, was a literal week. ‘Remember the sabbath day, to keep it holy. Six days shalt thou labor, and do all thy work: … For in six days the Lord made heaven and earth, the sea, and all that in them is, and rested the seventh day: wherefore the Lord blessed the sabbath day, and hallowed it’ (Exodus 20:8–11).

How could anything be more clear than this? These words were ‘written with the finger of God’ on tablets of stone (Exodus 31:18). They surely should be taken to mean what they say. God does not couch his commandments in crude puns! The Lord Jesus Himself, referring to the creation of Adam and Eve (Genesis 1:27) said: ‘From the beginning of the creation God made them male and female’ (Mark 10:6). Not after 20 billion years of pointless cosmic evolution and 4.6 billion years of painful terrestrial evolution, but from the beginning of the creation, Christ made man and woman.

Just as evolution has served as the integrating framework and foundation of humanistic education, so must genuine creation be made the foundation and framework of true biblical education, in accord with God’s primeval Edenic mandate. Also, since the pseudo-scientific basis for evolution lies almost solely in the assumed vast ages of uniformitarian earth history (in fact, the very concept of evolution in the broad sense is essentially synonymous with infinite ages of past time), it is also vitally important that the biblical doctrine of recent, literal creation be integrated into the educational system.

It is urgent in these critical days that Christians again assume responsibility for the education of their own people, especially their young people. In the Bible, it is clear that education is the responsibility of the home and the church, not the government or any body of secular educators. The public schools and other secular education institutions, apart from miraculous intervention, seem irretrievably controlled by the religious philosophy of secular evolutionary humanism, which now dominates and permeates every academic discipline. This philosophy in turn has led to a host of moral, social and political evils in society. It is fruitless for Christians to spend all their time and resources fighting these evils unless they also correct the source from which they flow. The tree will continue producing bitter fruits as long as its bitter roots remain in the ground.