Is ‘string’ the next big thing?

Theories about cosmic evolution dangle by a thread

Most people have heard of the expression ‘the big bang’. Its usage is so prevalent among mainstream scientists and the media that it has become the accepted ‘fact’ for how the universe began. However, there are an increasing number of secular scientists who are sceptical of this theory of cosmic evolution, and much of their scepticism has been caused by increasing discoveries that fly in the face of big bang theory. In May 2004 ‘An Open Letter to the Scientific Community’ signed by dozens of secular scientists was advertised in the renowned New Scientist. At the time of writing this article, the total number of scientists signing the letter who are sceptical of the big bang has increased to over 400.1

One of the great problems for those who believe that the universe came into existence by itself is that the universe does not present itself in such a manner. For example, the complexity of the observable universe fits better with the idea that it has been specially created ex nihilo.2 The ‘first cause’ problem is one of the great stumbling blocks for evolutionary cosmology. For example, consider the following logically valid argument.

In short, if the universe had a beginning, then it must have had a cause.

The so-called ‘Anthropic Principle’ derives from the observation that many aspects of the universe give at least the appearance of having been designed specifically for human life. There are an abundance of design features that sit uncomfortably for those who believe that we exist as a result of some giant cosmic lottery. So it is often claimed that there must be a myriad of other universes, with different features, even different laws of physics. And in our own universe the cosmic dice just happened to fall in such a way that the laws were those that would allow humans to evolve. Which is why we are here in the first place to ask such ‘anthropic’ questions. In other words, we are not here by design, it just looks that way, perhaps due to ‘evolution by natural selection’ among various (unobserved) universes.

Even though the big bang is passionately held to by some advocates of design, it also is used to attempt to avoid a Designer. The theory claims that all the matter, space and energy of the entire universe pre-existed in a particle no bigger than the head of a pin. Then, for no reason, it suddenly expanded, and the energy became matter that formed galaxies, stars and ultimately people.

Attempts to prop up this theory in the face of increasing problems have led to many weird hypotheses invoking mysterious unseen forces known as ‘dark matter’ and ‘dark energy’ to basically hold the universe together or to push it apart.5 All of these speculations attempt to avoid the obvious spiritual implications of design (Colossians 1:16–17).

A theory of everything?

One should consider that many of these ‘cosmic convolutions’ lack experimental support and are speculative ideas dressed in convoluted mathematics. One such idea is string theory. Although highly controversial, it has been gaining in popularity, and research is well-funded, particularly by those trying to prop up big bang ideology.

See the box for a brief explanation of string theory. Although the box may not seem like it, it is a ‘string theory for dummies’ type of explanation. But don’t worry if you can’t understand it. No one really does, as we will see. And there is not a single shred of experimental evidence to support the claims. String theory is presently completely unobservable and untestable. However, its advocates would also claim that it is not falsifiable, and therefore, it might be correct. This is the nature of such ‘elegant’ theories. One not infrequently hears similar claims about evolution in general.

A commentator in a popular science journal noted:

‘The suspicion is that they’re just floundering around doing ever more esoteric mathematics, but not really making any progress at all. It’s a suspicion confirmed … by David Gross, the Nobel Prize-winning American Theorist and one of the founders of string theory. At a prestigious conference of the best and brightest in physics he admitted: “We don’t know what we are talking about.”’6

One of the reasons that many are excited about the potential of string theory is that they hope it might evolve to become the elusive ‘theory of everything’—the holy grail that has eluded physicists for decades. The fundamental forces that govern our universe are gravity, electromagnetism, and the strong and weak nuclear forces (that hold atoms together). String theory is an attempt to unify these forces into one mathematical theory, an attempt that many physicists now believe to be impossible anyway.

‘We [string theory physicists] don’t know what we’re talking about’— David Gross, Nobel Prize-winning American theorist and one of the founders of string theory

Like the expression ‘the big bang’, string theory is becoming part of the common language of cosmology, and sadly, many professing evangelical Christians, like the old-earth creationist Dr Hugh Ross, have jumped onto the string theory bandwagon.7 Some, always eager to find a way of not appearing too ‘out of kilter’ with the secular scientific community, propose that the other dimensions invoked by string theory could be the ‘other’ spiritual dimensions mentioned in Scripture.

Of course, it is reasonable to assume that there is another realm or dimension in which angels and/or God may exist, and Paul spoke about a ‘third heaven’ (2 Corinthians 12:2).8 These may be compartments or areas of a spiritual realm or dimension, though not necessarily extra dimensions in themselves.9 The Bible does not speak about other dimensions specifically, and speculating on such matters in too much detail can lead to positions bordering on the heretical.10 This is one of the problems of taking the currently popular views of secular evolutionary scientists and trying to adapt them to Scripture.

Evolutionary ideas like string theory start from a worldview framework that there is no God. Therefore it is dangerous practice to intermarry secular guesswork with the Bible. For example, like the big bang, there are many versions of string theory. So which one should we hang our theology on? If the secular theory changes tomorrow, do we then revise our theology? Finally, when the Bible cannot be twisted sufficiently to incorporate man-made ideologies that we assume to be correct, what happens to one’s faith?

It’s a much more reliable practice to start with Scripture when trying to understand our world and universe. The reality is there is still so much we don’t understand. But we can trust God. After all, He is the One who created it all to begin with. He encourages us to ‘Trust in the Lord with all your heart, And lean not on your own understanding; In all your ways acknowledge Him, And He shall direct your paths’ (Proverbs 3:5–6). 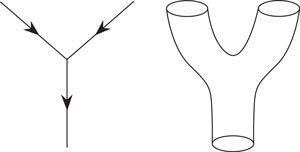 Classical physics treats particles basically as zero-dimensional point-like objects, and quantum mechanics recognizes that they can also behave in wave-like fashion. But completely distinct from this physics, string theory proposes that they may instead exist as one-dimensional loops or ‘strings’ (see figure 1) that cut across or exist in nine spatial (and one time) dimensions compared to the three spatial (and one time) dimensions we understand and use in relativity theory.1 Some suggest that these strings exist as higher dimensional objects called branes (membrane-like structures) that act like vibrating flat sheets or tubes etc.2 These ideas can even be extended to support the idea of multi-universes coexisting with our own, and that our own universe (the big bang) was the result of the collision of two of these branes in some higher-dimensional hyperspace. The goal is to get the universe to create itself—that way, no first cause would be needed, hence no God.