Mammoth clones coming to a zoo near you

Over the past decade or two, there have been many reports from various research teams claiming they are going to resurrect some long-lost species. True to form, one recent story tells about a joint Russian-Japanese effort to clone a mammoth from frozen tissues.1 Frozen mammoths have been known for many years.2 More recently, mitochondrial DNA has been obtained from the (non-fossilized) remains of mammoths3 and mastodons,4 allowing geneticists to speculate on the origins and evolution of the proboscideans. Currently, the mammoth is seen as more closely related to the Asian elephant than both of those are to the African elephant.5 Thus, it may not be a surprise that some mammoth-like traits have remained in isolated populations of Asian elephants.6 The mastodon, with its very different teeth, is seen as a sister taxon to the Elephantidae.

But what about the goal of cloning a mammoth from frozen tissues? As a geneticist, I say: “Fat chance!” With enough time and money, someone might eventually create a genetically-engineered elephant with mammoth genes in it. This will not be easy as elephants are not a model organism for creating cross-species hybrids (unlike the fruit fly or the bacterium, E. coli, which have been used extensively for such things). The chances of obtaining a viable nucleus from thousands-of-years-old, frozen remains is far-fetched. Even under optimal laboratory storage conditions, DNA breaks down over time. Just a few short years ago, the idea of obtaining DNA from ancient specimens was seen as absurd. Today, we are able to get fragmented DNA from some of the best-preserved specimens. In the Neanderthal genome sequencing project, for instance, chromosomes (each more than 50 million base pairs long) had broken up into fragments 50-bp long, and less.7 How can one expect to obtain a viable nucleus, with all of its cellular components, including DNA, RNA, proteins and membrane in place and intact after so many years? As a biblical creationist, I believe mammoths lived after (as well as before) Noah’s Flood (which happened about 4,500 years ago), yet even that is too long ago to give me hope of obtaining a viable nucleus!

They are going to have to do significant engineering of the DNA just to make a ‘mammophant’ hybrid. The re-creation of a full-fledged furry giant is another matter altogether. Remember, Darwinists consistently downplay the complexity of the cell. They also consistently play up their results. So, when and if they engineer a hairy elephant (using what they learn about what causes hairiness in mammoths), they will be trumpeting how their understanding of evolution led to the re-creation of the woolly mammoth. Yet, none of their ‘resurrection-by-cloning’ predictions will come true, and similar such cloning claims in the future will be mostly inaccurate.

However, an engineered hairy elephant is certainly possible—and I may be the first person in line to see it on opening day at the zoo. 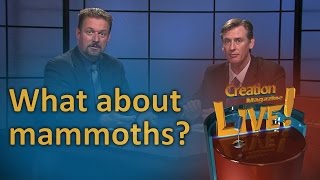