An impossible conundrum for evolution

Evolutionists have never been able to give a satisfactory answer to the problem of where the new information comes from that evolution requires for turning a microbe into a myxomycete or a maze-mastering mammal. Their best guess is gene duplication (which gives them an extra length of DNA, but it contains no new information) followed by random mutations that are supposed to turn the duplicated information into something new and useful.

They have no direct experimental evidence for this claim (and there is much against it1), so they have to rely on indirect evidence such as the so-called ‘gene families’. Some genes are similar in both structure and function to other genes, and evolutionists point to these and say they originated by chance copying and mutation from some common ancestral gene. But this is just evolutionary speculation; it is not experimental evidence.

The globin gene family is a favourite example. Hemoglobin carries oxygen in our blood and can be made up of different combinations of different kinds of globin proteins. For example, hemoglobin in human fetal blood contains a different combination of globins to that in post-natal blood. Evolutionists claim this resulted from an original globin molecule that duplicated in an early blood-using animal and mutated to form a family of different kinds of globins, which then allowed the diversification of complexity in oxygen-using processes that we see in the animal world today.2

But this example is far better explained by intelligent design.3 The human baby in his or her mother’s womb has to compete for the oxygen in its mother’s blood supply with the demand for oxygen from two other sources: the placenta that feeds it, and from the mother’s womb that surrounds it. So the fetal hemoglobin has to have, amongst other things, a higher affinity for oxygen than the mother’s hemoglobin. In contrast, when the baby is born and can draw oxygen from the air in its own lungs, it no longer has any competition so it requires a different kind of oxygen-uptake system. A wise Creator would ensure that the hemoglobin could change its form and function to cater for these very different conditions, and integrate this change into the other vast complexities of the almost miraculous reproductive process. The idea that such complex interactive changes could all occur by chance is rather hard to accept.

The amount of meta-information in the human genome is thus truly enormous compared with the amount of primary gene-coding information.

In his monumental work, The Ancestor’s Tale,7 Richard Dawkins traced the supposed ancestry of humanity back through all the evolutionary ages to the very first supposed common ancestor of all life. He supposed this original ancestor to have been an RNA-type of life form, although he admitted ignorance of the precise details.8 His choice of an original RNA life form is well-founded because RNA is the only known molecule that can do all of the three basic functions of life: (a) store coded information, (b) combine with itself and other RNAs to create molecular machines, and (c) self-replicate (but only in a very limited manner under very special circumstances).

A central problem in cell division (that is, what living cells actually do, as opposed to Dawkins’ imagined self-replication) is that a large proportion of the whole genome is required for the normal operation of the cell—probably at least 50% in unspecialized body cells and up to 70–80% in complex liver and brain cells. When it comes time for a cell to divide, not only does the DNA have to continue to sustain normal cell operations, it also has to sustain the extra activity associated with cell division.

The cell’s solution to this logistics nightmare is truly astonishing.9 Replication does not begin at any one point, but at thousands of different points. But of these thousands of potential start points, only a subset are used in any one cell cycle—different subsets are used at different times and places. Can you see how this might solve the logistics problem?

A full understanding is yet to emerge because the system is so complex; however, some progress has been made:

Such a magnificent solution to such a monster logistics problem could only come from a Master Designer.

Now comes the impossible conundrum. Keeping in mind the cake analogy, lets recall that the vast majority of information in humans is not ingredient-level information (code for proteins) but meta-information—instructions for using the ingredients to make, maintain and reproduce functional human beings.

Evolutionists say that all this information arose by random mutations, but this is not possible. Random events are, by definition, independent of one another. But meta-information is, by definition, totally dependent upon the information to which it relates. It would be quite non-sensical to take the cooking instructions for making a cake and apply them to the assembly of, say, a child’s plastic toy (if nothing else, the baking stage would reduce the toy to a mangled mess). Cake-cooking instructions only have meaning when applied to cake-making ingredients. So too, the logistics solution to the cell division problem is only relevant to the problem of cell division. If we applied the logistics solution to the problem of mate attraction via pheromones (scent) in moths it would not work. All the vast amount of meta-information in human beings only has meaning when applied to the gene content of the human genome. 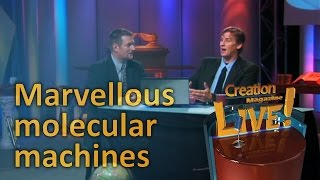