Evolutionists have had to reconsider the history of some tribes which use ‘Stone Age’ technology and live by ‘primitive’ hunting and gathering. These tribes had been considered relics of the ‘Stone Age’ that had never evolved culturally any further.

Such groups include the South American Bororo, Pume and Guaja people of the Amazon Basin who were considered by evolutionists as some of the ‘most primitive’ hunter-gatherers on earth.

Archaeological evidence now shows that they descended from sophisticated cultures which made fine pottery and had advanced agriculture. The effects of the Spanish conquest (including new diseases) and the subsequent dispersion of these people into small groups meant their previous technology and lifestyle was abandoned.

Anthropologist Anna Roosevelt of the University of Illinois says that to take the lifestyle of one of these ‘most primitive groups on earth’ and project it on to the past ‘is not really a legitimate scientific enterprise’. One such group of ‘primitive’ hunter-gatherers turned out, on closer study, to be surviving by ‘hunting’ cattle off ranches and ‘gathering’ produce off farms.

Another tribe in which men, not women, did the gathering was the subject of much socio-evolutionary speculation until it was discovered that this was only because the women had been molested by ranchers during gathering forays.

Because a society has a very basic technology and a non-farming lifestyle does not mean its ancestors did not build cities and grow crops. This is true for ‘fossil’ cultures (e.g. those deduced by finding relics left by extinct groups of alleged ‘Stone Age’ humans) and for living ones.

Notice the parallel between the two forced, socially catastrophic dispersions: that of the South American conquest and that at Babel, both resulting in some groups of people quickly becoming ‘Stone Age’. 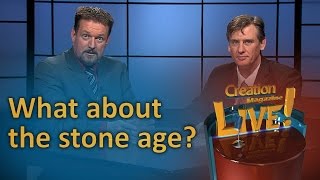 What about the Stone Age?