To Dr Carl—I read your stuff a while back where you claimed that the peppered moth stuff was based on fraud.

I was disturbed when someone showed me a recent science article that unfortunately for you undermines this claim. It shows that the moths are a classic example of evolution after all.

I hope you will retract your claims now in the light of this new evidence.

Thanks for your email. By our ‘stuff’ on the peppered moths, I presume you are referring to one section of our tract, ‘Frauds used to support evolution’, or most likely to my 1999 article in Creation magazine on which it was based, Goodbye Peppered Moths. And/or to the follow-up Creation article in 2002, The Moth Files.

And I presume that the recent evolutionist article you refer to would almost certainly be ‘The Moths at War’ in New Scientist.1 Your comment comes at a convenient time, as I had already started writing about this rather bald-faced attempt to falsely smear creationists. Rebutting it will be helpful to others, too, so please excuse if I am overly detailed in my reply.

If one reads both our items and the New Scientist article carefully, it becomes clear that far from our comments having to be retracted, this latest story seems to be a classic case of misleading ‘evolution-spin’, trying to convert a public embarrassment into a PR victory against creationists.

This concerns the classic example of ‘evolution in action’, England’s peppered moth, Biston betularia. The story in brief: The moth comes in two forms, light and dark. After the industrial revolution, pollution darkened England’s tree trunks.2 The Darwinian enthusiast H.B. Kettlewell claimed to have shown that after the industrial revolution, the darker moths predominated, and that this was the result of birds preferentially picking off the lighter forms on the now darkened tree trunks. This example became known as ‘industrial melanism’.3

Our items highlighted the comments of other evolutionists that indicated that this example could no longer be regarded as proof positive of Darwinism—and that its ‘iconic’ status for evolution was based on some rather dubious practices. The key points in our items:

Importantly, the article does not even attempt to refute what we reported about the fakery involved in pinning dead moths to tree trunks.

Importantly, the article does not even attempt to refute what we reported about the fakery involved in pinning dead moths to tree trunks. And the article itself concedes that Kettlewell’s procedures were substantially flawed.

What about Majerus’s ‘exhaustive experiment’ that has allegedly triumphantly restored the moth’s trophy status for Darwinists? Well, let me say once again that if it had been convincing, one would have said, ‘Big deal—what’s surprising about that?’ But ironically, what we see once more is the desperation of Darwinists in the propaganda war, as well as a total misunderstanding/misrepresentation of the creationist position on natural selection. Majerus spent seven years releasing moths (overcoming the procedural flaws in Kettlewell’s experiments) such that some came to rest on light-coloured trunks, and he watched birds eat some of them. His earth-shaking results?

As if that were not trivial enough, even this article attempting to present the experiment as a ‘coup de grace’ for evolution makes it plain that it ‘doesn’t satisfy all evolutionary biologists’. Some of these evolutionist critics point out that other animals also eat moths in nature, and may have different preferences for light and dark moths. And, most significantly of all, the article points out that the frequencies of light and dark moths ‘do not always correlate with the level of pollution’ anyway. But one can overlook all the frantic arm-waving and trumpet-blowing over whether the article demonstrates natural selection, (which is a process we don’t think needs to be demonstrated anyway—it is a self-evident logical deduction, as well as having been amply observed elsewhere). What is truly disturbing is the way in which the leap is made from an observed change of gene frequencies (which is what industrial melanism, if adequately demonstrated, would be) to, in Majerus’s quoted words, ‘the proof of evolution’. The word ‘evolution’, of course, means in most people’s minds the whole notion that particles have turned into people.

To say that because evolution requires a change in gene frequencies, demonstrating such a change demonstrates evolution is a logical fallacy of the following type (technically called affirming the consequent):

That should be amply clear from such articles on this site as Muddy Waters, The Evolution Train’s A-comin , and Beetle Bloopers.

A biblical creation model would also predict changing gene frequencies with time, but within the limits of the original kind plus the addition of (mostly information-losing) mutations.

Even as renowned an evolutionist as Pièrre-Paul Grassé, holder of the Chair of Evolution at the Sorbonne, made it clear that one can have mutations and selection in bacteria, for example, changing gene frequencies, but that this is a shift to the left, a shift to the right, with no net long-term result. Equally, the moths have shifted with pollution towards darker forms, then as the air has cleared up over the decades, the moth population has generally headed back again towards the situation where the lighter forms predominate once more. Where, then, is the net evolutionary change, the generation of novelty that is required by the theory?

The biologist L. Harrison Matthews was prominent enough to be asked to provide the foreword to the 1971 edition of Darwin’s Origin of Species. He was at the time clearly also quite happy to see the moths, as does Majerus, as an example of selection in action (which would be no big deal to us, too). So it’s worth noting what he says in that foreword (emphasis added):

‘The experiments beautifully demonstrate natural selection—or survival of the fittest—in action, but they do not show evolution in progress, for however the populations may alter in their content of light, intermediate or dark forms, all the moths remain from beginning to end Biston betularia.’

Towards the end of the article, Majerus is cited as making a revealing statement. He says that the birds-eating-moths story is ‘easy to understand because it involves things we are familiar with’. Exactly. It makes it easy to indoctrinate students with an example that makes sense, and then have them thinking that they have seen a process that somehow creates new things in biology. It is all part of the passion for the moth story, a story that evolutionists bolstered with not only inadequate procedures, but faked photographs. (And this passion has ensured that some major noses got out of joint when creationists made legitimate use of the revelations.)6 This is the reason why, to ensure it was understood and ingrained in students, some evolutionists faked/staged photographs in the first place. And it is clearly the reason for this article, to try to rehabilitate at all costs the idea (which may be true, it’s just that there is so little evidence for it) that the birds are definitely responsible for the changes in frequencies. Which makes it all the more ironic that the same article cites other evolutionists as saying that the jury is still out, even on that aspect of it.

And what about the alleged out-of-context (a politician’s favourite ruse) quotation of Jerry Coyne? In reality, as our articles show, it was never just a matter of him ‘pointing out some cautions’. We cited him from an article in his own hand in Nature magazine as indicating that the revelations about the moth story gave him the same feeling he had when he found out that Santa Claus was not real, and it was his father bringing the presents.7

As we said in the 2002 article mentioned earlier,

‘Three statements sum up the biological reality about this issue.

‘In other words, the only thing that’s happened is that the relative numbers of each have gone up and down. What do I think should be the real take-home lesson of the Peppered Moth saga? The fact that this amazingly banal set of events has been hammered worldwide as “ultimate proof” for a belief that microbes originally turned into moths (and moth researchers)! This is far more stupefying to contemplate than even all the faked photos and talk of fraudulent experiments.’

Thank you once again—I have truly appreciated the opportunity to draw attention to this astonishing New Scientist article. If anything, the ‘beatups’ and ‘spin’ it so obviously utilizes strengthen the point about how desperate evolutionists are not to have this particular ‘icon’ exposed for what it is—at best, an extremely trivial example of natural selection (not ‘the proof of evolution’). 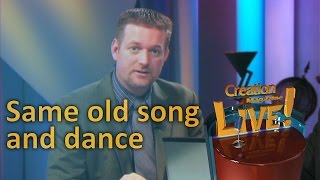