Browse our latest digital issue Subscribe
Facebook Twitter Pinterest Reddit LinkedIn Parler Gmail Email App Print
Editor’s note: As Creation magazine has been continuously published since 1978, we are publishing some of the articles from the archives for historical interest, such as this. For teaching and sharing purposes, readers are advised to supplement these historic articles with more up-to-date ones suggested in the Related Articles and Further Reading below.

Octopus suckers: glowing in the dark 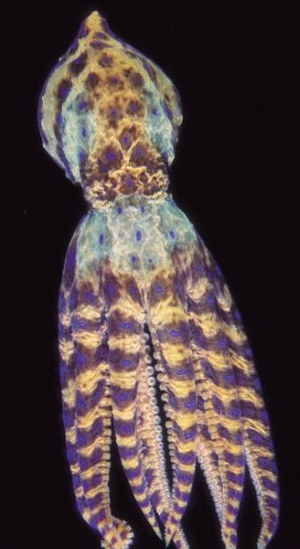 The Blue-ringed Octopus (above) appears to glow in the brightness of the photographer’s flash. Creatures featuring true bioluminescence, such as the deep-sea Angler Fish, are rarely seen by humans. Their intricate designs are fit for life in the deep.

One of the many remarkable features of the living world is that many types of organisms emit light; including bacteria, fungi, fireflies and fish. This process, called bioluminescence, is especially common in the deepest parts of the ocean, where no sunlight reaches. Also, deep-ocean ‘fish eyes are designed to see bioluminescence.’1

Bioluminescence is quite common in squids and cuttlefish, but not in their fellow cephalopods, the octopods. But recently, the deep-sea finned octopus, Stauroteuthis syrtensis, about the size of a fist, was found to emit a fairly bright blue-green light.4 The light comes from organs very similar to suckers. But instead of having sucking muscles, the organs have light-emitting cells.

One must also wonder what use a hypothetical transitional structure (the ‘suckers’) would be.

This light is just about the best colour5 for the most efficient transmission in the ocean. Thus it would be ideal for communication, for example, signaling to a mate. Also, in this fallen world, the light seems to lure its prey. Since its ‘suckers’ don’t suck, but emit light instead, the octopus ‘may trap small crustaceans in mucus produced near the mouth’.4

The authors4 proposed that these light organs evolved from real suckers, because of their common features. However, this is hardly conclusive proof of evolution and against creation, because good engineers often use similar designs for several different purposes.

More importantly, the authors4 failed to explain how exactly the complex light-emitting system evolved gradually by random mutations and natural selection. Partly complete luciferin molecules will not partly emit light—they will emit no light at all, let alone light of the ideal color! So natural selection cannot build up a light-emitting system via gradual steps. One must also wonder what use a hypothetical transitional structure (the ‘suckers’) would be. Since it would be good for neither suction nor light emission, its possessor would have a serious disadvantage, and would probably be eliminated by natural selection, rather than favored.

This light-emitting octopus is yet another example of exquisite design, so people are without excuse (Romans 1:20 ff.). It also shows that evolution is not based on the facts, but rather the interpretation of the facts in a framework where design is dogmatically excluded as a possible explanation.