The eruption of Mount Pinatubo on Luzon Island in the Philippines on 15 June 1991, the second largest eruption in the twentieth century, provides evidence of catastrophic processes that have shaped the land over millennia. It also exemplifies processes that were ongoing during Noah’s Flood and in the immediate post-Flood period.

Mount Pinatubo is an andesite-dacite stratovolcano and part of the Zimbales mountain range, with a current summit elevation of 1,486 m (reduced from 1,745 m pre-eruption). The amount of material released left a collapsed caldera approximately 2.5 km in diameter, now filled with acidic water (figure 1). Satellite imagery shows the lake surrounded by forest regrowth and a dendritic network of drainage systems ending in alluvial fans, indicative of the erosional power of the lahars (figure 2). The volcano lies on the subduction zone, where the Eurasian Plate passes beneath the Philippines Mobile Belt. There are various theories for the formation of andesite in volcanoes near subduction zones, some involving the action of water upon hot mantle. A more recent theory suggests andesite may form only a few days before an eruption with the mixing of basalt and rhyolite in the magma chamber.1

The eruption of Mount Pinatubo on Luzon Island in the Philippines on 15 June 1991 … provides evidence of catastrophic processes that have shaped the land over millennia.

Naturalistic scientists estimate, by K-Ar dating, that Mount Pinatubo is about 1.1 Ma old, although such dating methods have been shown to be unreliable.2 More modern eruptions are claimed to have started around 35,000 years ago, estimated from varying 14C measurements: other dates vary between 2,600–3,000, 4,400–5,200, and 8,000 years BP. These are all based on the usual long-age assumptions, but there is evidence that vegetation in volcanic regions may be contaminated with nearby sources of carbon dioxide, which potentially compromises such estimates.3 Lateral cutting of the 2,600–3,000 years BP deposits along the Abacan River, some 30 km distance from the volcano, reveals tree stumps of 1–1.5 m diameter, still in vertical growth positions, and covered in 5–6 m depth of sediment.4

The first eruption of the modern period left pyroclastic-flow deposits between 30 and 100 m in thickness over an area extending to approximately 20 km in radius from the volcano. These are known as the Inararo deposits, perhaps covering 160 km2 in area, but have been heavily eroded along the dendritic river systems over the period. Estimates suggest total pyroclastic deposition of 25 km3 in this event, some five times greater than that of the 1991 eruption.5

The eruption immediately prior to the 1991 event, known as the Buag eruption, occurred some 500 years ago, around AD 1500, and was possibly smaller in scale.5,6 Overall, it is estimated by secular scientists that more recent eruptions have decreased in size. This scenario supports various Flood models in relation to volcanism, which see maximal volcanic activity in the immediate post-Flood period, with a declining trend thereafter.7 Despite reducing volcanism, the pyroclastic flows from the 1991 eruption filled existing valleys with ash, and larger material to a depth of up to 200 m.8 The rock formations around the volcano reflect deposition from ashfall and pyroclastic flows from multiple eruptive events, and shows evidence of natural layering in a matter of minutes (figure 3).

The 1991 eruption and its effects

Like the Mount St Helens volcanic eruption of 18 May 1980, the legacy of the Mount Pinatubo eruption highlights layers forming naturally in pyroclastic flows and ash deposition.

Like the Mount St Helens volcanic eruption of 18 May 1980, the legacy of the Mount Pinatubo eruption highlights layers forming naturally in pyroclastic flows and ash deposition. Subsequent reworking of the ash has occurred with flash flooding and mud flows, known as lahars, which have proved more dangerous to life than the eruption itself. Floods have left wide, flat valleys in the lower mountain range and steep canyons at higher elevations with reworked deposits measurable in metres or tens of metres. It is estimated that 10 km3 of material was ejected into the atmosphere in the June 1991 eruption, with around half of this (5–7 km3) falling in the immediate region of the volcano and transforming the landscape. Ash and dust rose 35 km into the stratosphere, along with the release of 20 million tonnes of SO2—sufficient to cool the planet by 0.5°C for two years.4,8

Unconsolidated pyroclastic deposits are eroded quickly through the action of rainwater, such as particularly occurs during the monsoon and typhoon period in southeast Asia (typically June to October). Rainfall intensity can exceed 50 mm (2 in) per hour. This leads to lahars, flash flooding with suspended mud flows from the unconsolidated sediment, that travel at high speed many tens of kilometres from the source. These sometimes bury villages and towns in their path in thick layers of reworked deposits. The mud flows may be 10 m in depth and 100 m wide, eroding into the surrounding cliffs and so increasing in volume as they flow. Deposition depths of fresh sediment in alluvial fans are typically 1–5 m for each event. Estimates consider that up to 3 km3 of material was carried into the area surrounding Pinatubo by lahars in the first decade after the eruption, with devastating consequences for surrounding towns and villages.4 More people died from such events than from the eruption itself. Boulders with diameter 1.5 m are not uncommon in lahar flows and in other mud flows. For instance, at the Nevado del Ruiz volcano, 7-m–diameter boulders have been carried hundreds of metres.4,9

Water-induced lahars can travel at speeds of 30–60 km/h (20–40 mph) and contain 40–90% solid debris of ash, pumice, and other rocks. Interestingly, higher percentages of solid material to water enable faster downslope velocity due to increased laminar flow. The river valleys in the lower parts of Pinatubo are cross-sectionally flat with shallow slopes, and are hundreds of metres wide, with vertical cliffs at their edge, for instance along the O’Donnell River near Santa Juliana (figure 4). The normal river volume flow is evidently small compared to the scale of the flash floods and mud flows. Valleys are steeper and narrower higher up the volcano with recent canyon formation evident over the past 30 years (figure 5). The fresh sediment is denuded by rainfall forming new valleys and canyons in a matter of a few days and months, while the ash layers can be traced across a wider area.

Like the Mount St Helens eruption in America, the Philippines’ Pinatubo eruption of 1991 highlights catastrophic processes that are involved in shaping the landform in periods ranging from minutes to several years, reflective of events during and after Noah’s Flood. Layers measurable in tens of metres can be seen to form naturally in fast-moving pyroclastic flows. Later heavy rainfall leads to high rates of erosion of unconsolidated material, and massive waterborne transport of material to lower altitudes and fresh deposition measurable in metres to tens of metres. Overall, this is estimated to have involved the movement of several cubic kilometres of material over a period of a decade. Towns and villages have been inundated, and forest trees have historically been buried vertically in situ. Short periods of time are necessary for the formation of conformable layers, while longer periods of time, measurable in days, months, and years, lead to significant erosion, with valley and canyon formation and sediment deposition on alluvial plains. This is a testimony to the destructive power of catastrophe, and it shows that many types of formations normally associated with uniformitarian processes can be explained in the context of a cataclysm—much like Noah’s Flood and its immediate aftermath. 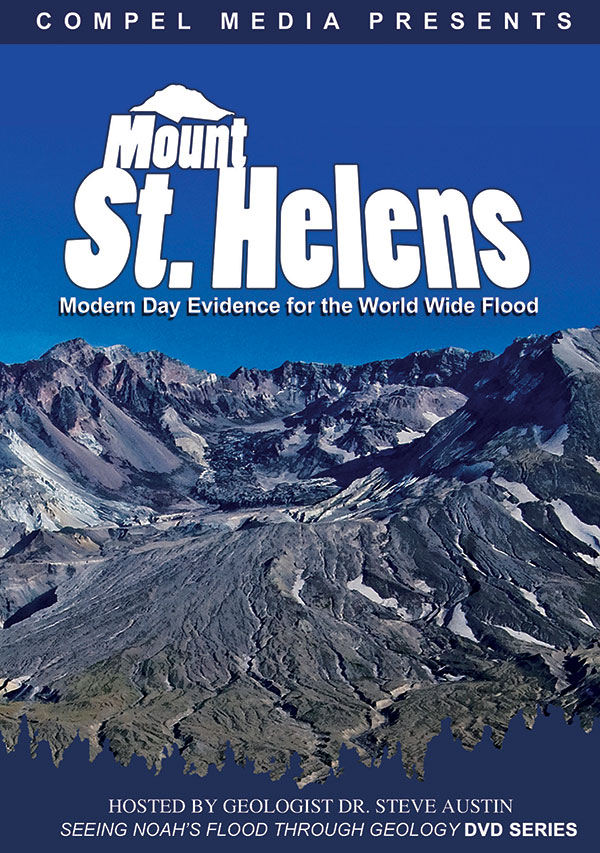 Voice of the Volcano comic
US $2.50
Soft Cover

Mount St. Helens - 7-Day Streaming
US $3.99
Streaming Video
Footprints in the Ash
by John Morris, Steven A Austin
US $17.00
Hard Cover
Voice of the Volcano comic
US $2.50
Soft Cover