The planets are young: 2
Earth and Mars

We continue our response to the BBC-TV series The Planets, narrated by Professor Brian Cox. In this article, we are considering the second episode, The Two Sisters: Earth and Mars.

Cox throws out the terms ‘billions/millions of years’ no less than 23 times in this episode, without once giving any scientific justification for this long-age time frame. Our time frame is the 6,000 years of Earth and cosmic history recorded in Genesis Chapter 1. For our biblical justification for this, see How does the Bible teach 6,000 years? For ‘101 evidences for a young age of the earth and the universe’, consistent with this, see Age of the earth.

All the evidence for life is consistent with the belief that God created life here on Earth some 6,000 years ago.

Cox tells viewers: “You can read the history of the planet [Mars] written across its surface, and the reason for that is that there’s virtually no erosion, hasn’t been for billons of years, so the scars of events that happened even four billion years ago can still be seen.”

One of the regions which he says “reveals Mars’ former life … is called Noachis Terra or the Land of Noah”, and he says that this is “a wonderfully evocative name, because its surface is sculpted by flowing water. All across the earliest Martian surface, we’ve glimpsed traces of what appear to be lakes and rivers. And so a new generation of spacecraft has been sent to Mars to investigate the existence of water and what happened to the planet for it all to disappear.”

Mars does indeed have formations such as chasms, gullies, layer deposits, apparent shore lines, etc., that appear to have been “sculptured by flowing water”, as Cox claims. But according to the Bible, Genesis 1:14–19, Mars was created on Day 4 of Creation Week, some 6,000 years ago, and so, according to this worldview, all such activity must have been within this timeframe, and hence ‘recent’.

One of the craft sent by NASA to examine these features was Curiosity. Cox says it “touched down in Gale crater, a 150-km-wide impact basin, thought to have been home to an ancient lake”, where it saw “pebbles polished and rounded by running water in what had once been rivers and streams.” This is probably a correct analysis.

Cox: “61 days after landing … [Curiosity’s] rover took its first scoops of Martian soil. Chemical analysis of the fine dusty sand revealed … 2% of the soil is still made up of water.”

Cox goes on to describe a wet early Mars, e.g.: “Rains fell, rivers ran, and, in the northern hemisphere, water collected in a vast sea that covered one-fifth of the Martian surface. The Red Planet was once blue.” He allocates all this to “around 4 billion years ago”, but adduces no evidence for this particular date.

Loss of water on Mars

Cox: “Within a billion years all Mars’ lakes and seas had disappeared. In our solar system, only one blue planet survives, Mars’ sister, Earth.” His validation for this claim is somewhat convoluted because it begins with Earth’s moon, but here is a summary of what he says/claims:

Readers should note that many of the above items are conjectures, in accordance with the long-age evolutionist worldview. Contrary to that worldview, according to the 6,000-year-age creationist worldview:

Life on Earth does not equate to life on Mars

Cox moves on to the search for life on Mars, and he begins this by stating the current evolutionary view of the origin of life on Earth:

“It’s thought that in warm volcanic pools or in deep sea hydrothermal vents, conditions were right for the chemical building blocks of life to form spontaneously. And that means that if similar conditions were to be found elsewhere in the solar system it might be possible that life began there too.”

In 2005, NASA embarked on a mission to look for these same conditions on Mars, and in 2017, the Mars Reconnaissance Orbiter [MRO] surveyed the Eridania Basin. Cox takes up the story:

“It was here that MRO found the evidence it was looking for: 400-metre-thick deposits of minerals that, on Earth, form in deep sea hydrothermal vents. In the Eridania Basin, MRO revealed that conditions on Mars had once been ripe for the emergence of life. … When life began here on Earth, 3.8 billion years ago, the conditions on Mars were very similar.”

Not so to all the above claims! There is no evidence that life on Earth began in volcanic pools or deep sea hydrothermal vents at any time, let alone 3.8 billion years ago. So the alleged presence of these features on Mars is not evidence for the presence of life there, or even the possibility thereof. All the evidence for life is consistent with the belief that God created life here on Earth some 6,000 years ago. It did not form spontaneously 3.8 billion years ago, anywhere. And all the scientific evidence confirms that the idea that it did is in the realms of fantasy. See creation.com/origin-of-life,

Mars today is a dry frigid world, nothing like the above supposedly life-congenial haven. So Cox spends the rest of this episode updating Mars to the factual one we know in the 21st century—no longer warm and wet, but cold and arid. He does this via the following claimed process:

Earth is protected from the solar wind of electrically charged particles emanating from the sun, and this protection for life on Earth is by means of Earth’s magnetic field (the interaction of which causes the auroras seen at Earth’s poles). Earth’s magnetic field is running down, so it could not have been going on more than a few thousand years, despite swapping direction many times. Evolutionary theories are unable to explain how this magnetism could sustain itself for billions of years. A young age for Earth fits the data best. See The earth’s magnetic field: evidence that the earth is young.

To explain the origin of a planet’s magnetic field, evolutionists invoke a dynamo effect produced by ‘movement’ of a liquid iron planetary core. However, with Mars, evolutionists have to explain not only the origin of a magnetic shield for when it was allegedly life-friendly, but also the subsequent loss of the shield now that it is hugely hostile to life. Here is how Cox does this:

“Just like Earth, ancient Mars was also shielded from the Sun. But between 3.5 and 4 billion years ago, Mars’ dynamo switched off. The aurora surrounding the [Mars’] poles slowly faded away as the magnetic field diminished, allowing the atmosphere to be stripped away by the solar wind. Without protection, sea evaporated, the surface froze, and Mars was transformed.”

Quite a story! But that’s all it is—a story to avoid invoking the Creator. A much more plausible account, at least for Christians, is that God designed Earth to have a magnetic field in order to protect life on Earth. Mars does not appear to have been designed for life, and hence does not need a magnetic field like Earth’s.

Near the end of this program, Cox asserts:

“The discovery of a second genesis in our solar system would have profound philosophical, scientific, and cultural consequences, because it would mean there is a sense of inevitability about the origin of life, and that would mean that the universe is most likely teeming with life—that we are not alone.”

Not so! Evolutionists cannot explain the origin of life without a Creator. And ‘a second genesis’ has not been discovered, and biblically would not be expected for a moment..

Mars is an intriguing red heavenly object, created as a sign and a marker of times. And while many have hoped for life, it’s an inhospitable, cold, dry world. Yet there is good evidence that it had huge flooding. Since Mars is not that much further from the Sun than Earth, and is freezing, it shows how finely God tuned Earth’s orbit to support life. See Mars the red planet.

Which planet had a global Flood?

Many secular geologists agree that there were huge floods on Mars, although it hasn’t a drop of liquid water. Yet they deny a global flood on Earth, which is 70% covered by water (and if all the mountains were flattened down and ocean bottoms raised so the solid surface was completely even, this water would cover the whole Earth to a depth of 3 km). Why? The Flood of Noah’s day shows that God judges sin, and will do so again, and secularists don’t want to admit their accountability to their Creator. Mars shows that they are willingly ignorant, as the Apostle Peter said ( 2 Peter 3:3–7 ). 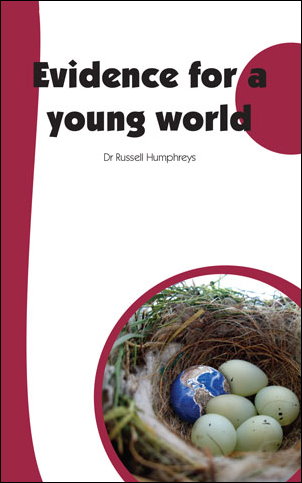 Evidence for a young world
by Dr Russell Humphreys
US $0.60
Soft Cover