Puijila, claimed ancestor of pinnipeds is an otter

For 150 years, evolutionists had not been able to find evolutionary ancestors for the aquatic group of mammals called pinnipeds—the seals, sea lions, and walruses. This was odd because they had found well over 15,000 fossil pinnipeds1 but they had not found any land ancestors that were on the way to becoming a seal, sea lion or walrus. Their ‘oldest’ fossil, a creature called Enaliarctos, looked like a modern sea lion, with fully aquatic front and back flippers, not feet or even webbed feet.2 Such a wealth of fossils but no transitional creature fossils posed a conundrum for evolution scientists. For creation scientists, this was not a problem at all but the expected fossil pattern: Pinnipeds were created ‘as is’, and did not evolve from another animal, hence the missing links should not be found.

In 2009 Puijila darwini was announced as the latest ‘missing link’ found, a triumph of evolution.3 This was published in Nature, regarded as the most prestigious journal in the world. Richard Dawkins waxed lyrical about this fossil:

“Puijila neatly straddles the gap between land and water in the ancestry of pinnipeds. It is yet another delightful addition to our growing list of ‘links’ that are no longer missing.”4

According to Dr Carl Werner… it looks like the authors of the Nature article seriously misrepresented and misinterpreted the fossils.

However, according to Dr Carl Werner, who investigated this claim in detail for his book Evolution the Grand Experiment (2nd Edition), it looks like the authors of the Nature article seriously misrepresented and misinterpreted the fossils.5

The skeleton of Puijila looks like a modern river otter, not a missing link. The scientists who discovered the fossil tacitly acknowledged this: “Puijila did not possess flippers, its feet were probably webbed, it had a long tail and its limb proportions were generally similar to modern otters” and “the postcranial skeleton [everything other than the head] of Puijila appears most similar to that of the extant [(living) North American] river otter Lontra canadensis.”

Dr Werner pointed out that Puijila looks like a modern river otter and does not have the necessary anatomic features to even call it a pinniped: “Puijila did not have the typical oversized finned back feet or front flippers diagnostic of pinnipeds. Rather, Puijila had four small webbed feet similar to North American river otters.” Even the overall length of Puijila was similar to the North American river otter (Puijila: 110 cm versus 112 cm; see figure 1). Nevertheless, the Nature authors claimed that their fossil was a “primitive Arctic pinniped”. This would be equivalent to calling a hippopotamus a ‘whale’ because you believed hippos evolved into whales, as some evolution scientists claim.

In their enthusiasm for finding a significant ‘missing link’ the paleontologists got it very wrong. Puijila is just an otter, almost identical to the North American river otter.

So what about the skull, which they claim is different to an otter? The authors of the Nature article argued that Puijila had large eye sockets like pinnipeds and back teeth like pinnipeds. Simply put, these claims don’t stack up. Puijila did not have large eye sockets as claimed. The size of the eye socket of Puijila is small, similar to a river otter, not ‘large’—as seen in Dr Werner’s detailed comparisons in Evolution the Grand Experiment, (2nd Edition).

Regarding the teeth, Puijila, like living North American river otters, has two distinct types of teeth behind the canines: premolars and molars, which are also large. Their back teeth are nothing like those of pinnipeds, which are uniform and small. This strongly refutes the claim that Puijila had pinniped-like teeth (see figure 2).

Pinnipeds also have very short tails. The authors claimed that “the tail of Puijila appears to have been shorter and more gracile [thinner] than that of Lontra [the river otter]” but this claim is, again, misleading. Puijila’s tail looks like the modern river otter (compare the tails in the pictures of the two skeletons, figure 1).

Dr Werner made other comparisons, which make a strong case that, in their enthusiasm for finding a significant ‘missing link’ the paleontologists got it very wrong. Puijila is just an otter, almost identical to the North American river otter, which is still very much alive today. It appears that evolution scientists have yet another missing link gone ‘missing’. 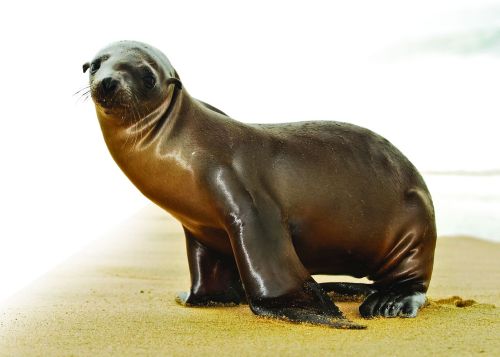 The Nature paper has a ‘family tree’ (cladogram) showing Puijila grouped with the pinnipeds, not the otters. However, Dr Werner shows why this does not stand up to critical scrutiny. For one thing, the authors do not include any of the six classic distinguishing characters of pinnipeds in the analyses. See creation.com/puijila-s.