Quantum physicist and Nobel Laureate Wolfgang Pauli (1900–1958) was famous for his spontaneous wit. When shown a bad paper by a young physicist, he quipped, “It is not only not right, it is not even wrong.” That is, at least if a paper is wrong, it says something clear and meaningful enough to be seen to be wrong, and we can learn the truth from its opposite. Pauli’s put-down refers to a claim that’s so obtuse, meaningless, or ambiguous, that it doesn’t really tell us anything, right or wrong. This was very similar to one of the objections to evolution, by Philip Skell (1918–2010), a leading chemist:1

Pauli’s put-down. “It’s not even wrong,” refers to a claim that’s so obtuse, meaningless, or ambiguous, that it doesn’t really tell us anything, right or wrong.

“Darwinian explanations for such things are often too supple: Natural selection makes humans self-centered and aggressive—except when it makes them altruistic and peaceable. Or natural selection produces virile men who eagerly spread their seed—except when it prefers men who are faithful protectors and providers. When an explanation is so supple that it can explain any behavior, it is difficult to test it experimentally, much less use it as a catalyst for scientific discovery.”2

The Bible: not even wrong?

The Bible on the other hand comprises propositional revelation—factual claims about things. These claims contradict uniformitarian geology and evolutionary biology in many areas: short time scale, order of events, direct creation of mankind, and death as the result of sin. So Darwin and his followers declared the Bible to be wrong.

Christian parents might be relieved that the teachers at their kids’ government schools don’t attack God or the Bible directly. But similarly, what the kids pick up is even worse: that the Bible is ‘not even wrong’—it has no relevance to anything in the real world. Sadly, in many churches, this is not countered: the Bible is treated as just a book of stories.

In response, some Christians were intimidated by the long-age philosophy masquerading as science. So instead of challenging the fallacies, they instead re-interpreted the Bible so that it didn’t make claims about history and science. However, this is a case of ‘loving the Bible too much’,3 and the result has been disastrous. It has defended against ‘the Bible is wrong’ by tacitly agreeing to something even worse: ‘the Bible is not even wrong.’

This is the way much of the world treats biblical Christianity today. John Searle (1932– ), philosopher at the University of California, Berkeley, wrote (before the notoriety of the likes of Richard Dawkins):

“Nowadays nobody bothers [to attack religion], and it is considered in slightly bad taste to even raise the question of God’s existence. I believe that something much more radical than a decline in religious faith has taken place. For us, the educated members of society, the world has become demystified … The result of this demystification is that we have gone beyond atheism to a point where the issue no longer matters in the way it did to earlier generations.”4

Christian parents might be relieved that the teachers at their kids’ government schools don’t attack God or the Bible directly. But similarly, what the kids pick up is even worse: that the Bible is ‘not even wrong’—it has no relevance to anything in the real world. Sadly, in many churches, this is not countered: the Bible is treated as just a book of stories.

The Bible is right!

A foundational aim of our ministry and this magazine is to show that the Bible is right, including where it touches on science and history (2 Timothy 3:15–17). For example, the Bible’s teaching about an orderly Creator and divine Lawmaker showed that the universe was orderly. This inspired the pioneers of science that science could work in the first place—most of them were biblical creationists (p. 16). Indeed, many scientist-clergy flourished in the Middle Ages, ignorantly called the ‘Dark Ages’ by modern revisionists (p. 24), and every issue of Creation magazine interviews a highly qualified modern creationist scientist (p. 45 features husband and wife who are both Ph.D. engineers).

The Bible also teaches that God is the Designer of all life, and we constantly see human designers learning from the Master’s designs, e.g. mantis shrimp armour (p. 40) and the human nose (p. 56). The Bible reveals that God judged the world with a globe-covering flood too (Genesis 6–8, Luke 17:26–27). This has left striking features in the rock records, such as huge boulders in New Zealand (p. 20). This Flood was only about 4,500 years ago, and this is supported by soft tissue in marine worms, although evolutionists date them at 551 million years old (p. 22). We are told as well that God saved a remnant in an enormous barge, and we interview a man who has extensively researched its construction (p. 12).

Indeed, the New Testament authors clearly regarded Genesis as history, and expected that their readers had been taught to think the same (p. 52). This is what we need to emulate, and we hope that wide circulation of this magazine will help to do so. 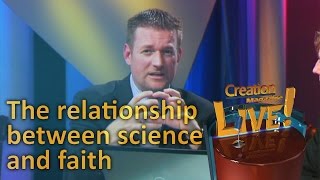