A review of Let There Be Science: Why God loves science, and science needs God by David Hutchings and Tom McLeish
Lion Books, Oxford, UK, 2017

It is commonplace in our day and culture to think of science and God as in conflict. Either they have nothing to do with each other, or they positively disagree with each other. But are they really at odds? Let there be Science is a 206-page response to this. It attempts to show, as the subtitle of the book says, “Why God loves science, and science needs God”.

The authors, David Hutchings and Tom McLeish, are well qualified to comment. Hutchings has a First Class Honours in Physics with Business Management followed by a PGCE with a major in Science, each from the University of York. Tom McLeish has a B.A., as well as a Ph.D. in fluid dynamics, both from Emmanuel College, Cambridge.

Paradigms can get in the way of science.

However, McLeish is a trustee of the John Templeton Foundation, well known for promoting theistic evolution. As such, it is no surprise to find that the authors adhere to secular thinking about the beginning of the universe and age of the earth: “the big bang theory, an idea which now dominates our thinking about both space and time” (p. 36). They consider Genesis as “one of the Bible’s many creation stories” (p. 189) and “[t]here are many creation texts of many different genres within the Bible, but one is by far the best known—that of Adam, Eve and the garden of Eden” (p. 103). These statements downplay the fact that Genesis is the primary historical account of creation in Scripture; other creation texts (e.g. Psalm 104, Proverbs 8, and Job 38) are not creation accounts aiming to describe what happened.

All 10 chapters start with two quotes which set the scene for the chapter on hand (seven chapters include one biblical quote). A large portion of Let there be science is devoted to a review of science history, including the roles played by Bible-believing Christians (and creationists!), such as Faraday, Maxwell, Newton, and others.

To identify the practice of science throughout history, the authors outline three distinct criteria of true science (p. 31):

Using these tenets, they find people practising science long before most people would expect—much further back than just a few centuries. They even identify Jesus using this scientific outlook 2,000 years ago! In Mark 7:14–19, Jesus contrasts a physical fact (food entering the stomach and being expelled) with a theological point, that things from outside cannot defile a person. Science—the digestive system—and faith—(im)morality—are linked together in one argument (p. 40).

Back still further (c. 580 BC) we pass Daniel, Hananiah, Mishael, and Azariah who ask the powers that be to “treat your servants in accordance with what you see” (Daniel 1:12–14). This is an invitation to test and observe (p. 41).

One example further back again is given: Gideon (1150 BC) and the fleece. The first night Gideon requests that the fleece will get wet but the ground dry. The second night he requests the reverse, that the ground will be wet and the fleece dry. He observes it is so and is confident that God is the cause: of his observations as well as the instructions to bear arms and fight off the oppressors (p. 42).

All this shows that “science has thrived, for millennia, in the presence of belief in the Biblical God” (p. 45). They also show what ought to be “the calling on scientists: follow the evidence” (p. 84). Indeed, this should apply irrespective of whether you are a Christian or not. Accusations are commonly hurled to and fro that the other side is not doing so. However, for a Christian to not follow the evidence is to live in contradiction with the biblical worldview: to be truthful and to follow truth (Exodus 20:16; John 14:6). But what if non-believers find any inconvenient truths about their worldview? Are they willing to admit that they have to change their idea? Apparently so, as long as it does not lead to God and Jesus.1

Paradigms can get in the way of science. The authors tell the story of Hungarian doctor Ignaz Semmelweis (1818–1865) of the Vienna General Hospital, who mandated handwashing before treating a patient. There was an immediate effect: the death rate of women dying after childbirth dropped significantly. Unfortunately, pride and ignorance got the better of Dr Charles Meigs, who said something along the lines of, “gentlemen’s hands are always clean” and therefore did not comply. Many others joined ranks with Meigs’ feigned innocence. As such, mother and baby mortality rates increased again, despite the proven success of the newly introduced hand hygiene policy (pp. 89–91).

However, the authors’ belief in evolution and billions of years also partly hinders science. Science (Latin: scientia) originally meant knowledge in general. God, who is omniscient—which both authors would acknowledge—is also the One who gave the revelation of the Bible, starting with the creation account followed by the Curse, due to the Fall. Adam and Eve “are portrayed as being part of a flawless natural world [emphasis added]” (p. 103). They were “portrayed” that way because they were a part of a world without sin and suffering before the Fall. However, when the authors cover Genesis 3, they emphasize the relation between humankind and nature, instead of the problem of sin and thus death:

“Previously, Adam and Eve had lived in peace with nature; now their coexistence would be a struggle. The relationship between humans and the creation around them was now damaged. As a result, theirs would be a fight to understand it, a fight to benefit from it and a fight to enjoy it.

Of course, adherers to long ages—before Adam was around to disobey God—don’t like to talk about death. It is a massive theological problem for them.

“Wisdom about nature would have to be hard won: it would be painful toil. In this same passage, though, God ensures that Adam and Eve are not left without hope. He hints that, one day, a decisive victory for humankind will be won over evil [emphasis in original]” (p. 103).

None of this is wrong per se, but the authors fail to mention how Genesis 3 deals with “the last enemy”: death (1 Corinthians 15:26). Of course, adherers to long ages—before Adam was around to disobey God—don’t like to talk about death. It is a massive theological problem for them. It is noteworthy the authors quote Robert White’s book Who is to blame? (p. 123):

“Natural processes such as earthquakes, volcanic eruptions, floods and the natural greenhouse effect are what make this world a fertile place in which to live. Without them, it would become a dead, sterile world and no one would be here to see it.”2

After all, they agree with White: “The Bible teaches that God has made a world in which uncertainty and chance—from our point of view—operate at local level in order to produce a functioning, habitable world overall” (pp. 123–124). However, Jesus mentions earthquakes together with wars, tumults, famines, and pestilences (Luke 21:9–11) and instructs us not to be terrified. These clearly were not part of the natural order, as God created everything very good. Rather, these are consequences of the Fall in Genesis 3.

The final pages of the book demonstrate that Christianity is not a blind faith. First, that the Bible itself is compatible with our experience of this world. Second, that many scientific giants were in fact Bible-believing Christians. And third, that the alternative position is far from persuasive. “If there is no God, and our brains are the product of pseudo-directed randomness, how is it that we can trust them?” (p. 171). This alternative leaves us “with no other option but to exercise faith … in ourselves, and … it is, by definition, blind [emphasis in original]” (p. 171).

However, the authors don’t recognise that they (in some ways) have put their faith in people above the Holy Spirit.

“Nowadays, clever use of technical scientific jargon can close down conversation or even enable dishonest pseudo-scientists to exploit the masses—who often feel hopelessly out of their depth. In the past, public ignorance—or even lack of access to—the Bible left the door open for dishonest pseudo-priests to do the [sic] exactly the same with their congregations” (p. 179).

They refer to people like David Wilkinson and Francis Collins as reliable guides who know science and the Bible very well. Both have questionable theological views, similar to those held by the authors (one of whom is mentioned along Wilkinson and Collins).

All in all, Let there be Science is not a bad read. However, apart from some specific historical events in the scientific world it does not really offer anything new. The departure from biblical creation by many is also apparent here. Although not rife throughout this book (e.g. pp. 36, 48, 119), let it serve as a notice for those wanting to read this little volume—or other works by either of the authors—for themselves: caveat lector (reader beware). 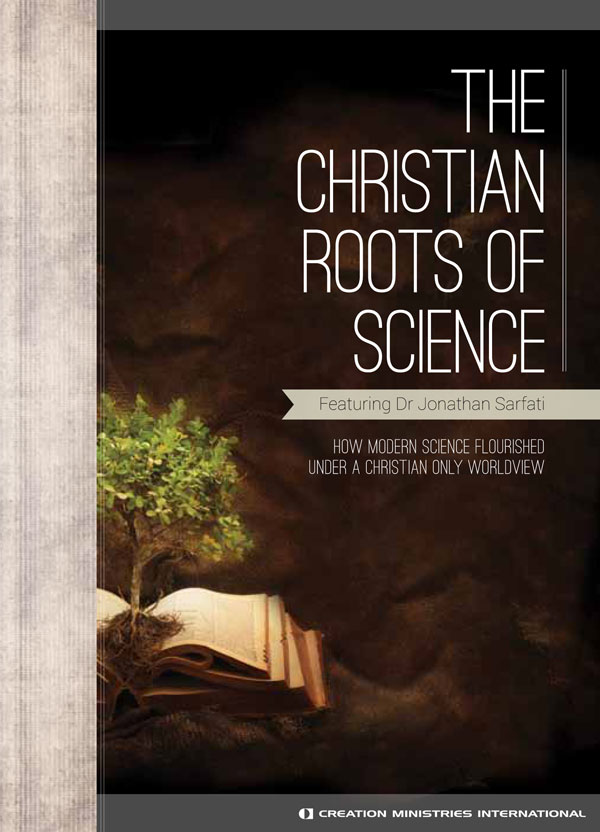 The Christian Roots of Science - Unlimited Streaming
US $7.99
Streaming Video

Evolution and the Christian Faith
by Philip Bell
US $20.00
Soft Cover
Are Miracles Scientific?
US $10.00
DVD
The Christian Roots of Science - Unlimited Streaming
US $7.99
Streaming Video