The anti-biblical agenda of early uniformitarians and evolutionists

A review of The Emperors Who Had No Clothes: Exposing the Hidden Roots of the Evolutionary Agenda by Milt Marcy
Privately Printed, 2013

Author Milt Marcy traces the historical development of Bible-hostile science. He ties it in with the later decline of Christian observance, and basic morality, especially in the last several decades. He sees a progression: spiritual faith, courage, liberty, abundance, and leisure, eventually and successively give way to selfishness, complacency, dependency, weakness, and finally bondage.

The quotations from leading uniformitarian and evolutionary scientists alone make this book worthwhile. One shortcoming of this work is its overuse of general online references instead of specific published ones.

There are two fundamental approaches to the origins of the old-earth, evolutionary view. One view is that the thinkers of 2–3 centuries ago were generally convinced Christians, who humbly bowed before the scientific evidence, and thus reluctantly abandoned belief in a recent, six-day creation.

The other view is that those who did so possessed a prior hostility to Scripture, and then fitted the evidence to their preconceptions. This work decisively supports the latter view in considerable detail.

Marcy recounts how Scotland, ever since the Reformation, had become a bastion of widespread learning. This was animated by, but was hardly limited to, Bible teaching. In 1640, a law mandated a national system of education for all. Soon, Scotland became Europe’s first modern literate society. By 1750, virtually every town in Scotland had a lending library. Soon thereafter, Scots became leaders in many different academic disciplines.

One can think of economist Adam Smith, scientist James Watt, poet Robert Burns, and many others.

The Bible was the textbook used to teach children to read, in Scotland, between at least 1561 and 1800.

The Bible was the textbook used to teach children to read, in Scotland, between at least 1561 and 1800. In fact, the church in Scotland was in charge of education until 1872. In the USA, the Bible was also used as a textbook until nearly 1700, when the New England Primer became the standard. However, even this was very Bible based, as it included a catechism that taught about sin, salvation, obedience to parents, etc. Bible stories were used to teach the alphabet. Author Marcy asks, “Can you imagine that in school today?” (p. 27).

The incremental deviation to infideldom

In the 18th and 19th centuries, so-called natural theology became popular in Scotland, in part because of God-hostile French influence. God was increasingly de-emphasized, and made increasingly remote. Hostility to the Bible gradually emerged. Often, it was covert or disguised as relatively innocent ‘anti-clericalism’. Deism was an amorphous term that encompassed varying degrees of departure from traditional theism. It effectively became a halfway house between theism and atheism.

The same course was followed throughout the once solidly Christian West. In 1836, in the USA, the McGuffey Readers were introduced, gradually replacing the New England Primer. However, the McGuffey Readers still included moral and biblical lessons. In time, thanks in part to the influence of the atheistic educationalist John Dewey (1859–1952), education became increasingly secularized. By the mid 20th century, the last traces of God were purged from the US government school system, largely owing to the untiring efforts of the so-called American Civil Liberties Union (ACLU).

The author provides some biographical background to James Hutton. Hutton may have been motivated by a long-term hostility to the Bible because of his lifelong non-conformist spirit and his adulterous affairs. The disapproval of Christians towards his conduct did not induce him to repent. It only hardened him.

In time, Hutton travelled to France, where his infidel spirit was probably nurtured. It is also very likely that Hutton was influenced by his contemporary in the Scottish Enlightenment—atheist David Hume.

In his book Theory of the Earth (1795), Hutton unambiguously states his belief that human evil, divine intervention, and the Genesis Flood had nothing to do with anything causative in geology (pp. 91–92). It also becomes obvious that James Hutton was hostile to the Bible in toto, and not just hostile to clericalism and supernaturalism, as deists are commonly characterized. In 1794, Hutton wrote that the Jewish religion, upon which the Christian faith was founded, originated from the same type of superstitious notions that characterized other peoples (p. 65). He wrote of the Christian faith as based on prejudice and superstition (p. 66). He added his belief, typical of infidels then and now, that the Old Testament taught a partial, jealous, and vindictive God (p. 67).

Hutton’s only positive view of the Bible was as a source of socially benevolent behaviours and virtues. This was socially palatable, in that it was something almost anyone could agree with. After all, even a militant atheist could concur that the Bible has some positive value!

Hutton visited the northern part of his native Scotland. He observed the Siccar Point unconformity (figure 1). Although the feature itself has no necessary connotations of time, Hutton insisted that vast amounts of time must have elapsed for its formation. In contrast, author Marcy realizes that, under catastrophic conditions, the deposition, folding, and erosion of strata could have all taken place in a small amount of time. Marcy also cites the work of Tas Walker, who showed that the strata in Siccar Point had evidence of catastrophic origin, such as unsorted sediments over a wide geographic area, orientation of large particles consistent with deposition by a powerful current, and soft-sediment deformation (insufficient time for complete lithification) as indicated by the folded but not fractured strata.1

Was Lyell an evolutionist all along?

Charles Lyell is often portrayed as a creationist—at least of sorts. Marcy challenges this view. He presents evidence that Lyell not only aggressively promoted Hutton’s old-earth gradualistic-change views, but was always sympathetic to some form of naturalistic progression of living things.

In an 1830 letter to Poulett Scrope, quoted by Marcy, Lyell expressed a desire to entertain more fully the “changes in organic life”, which he juxtaposed with the changes in the organic—that is, geology (pp. 104–105). In another letter—to J.W. Herschel—Lyell expressed sympathy towards the notion that new species can arise through intermediate causes (p. 108). Lyell also wrote a letter of praise to Darwin, but fell short of giving him an unqualified endorsement (p. 109).

In any case, Lyell’s views on the Bible and God are unambiguous—hardly consonant with Lyell being a creationist in any way. In his Principles of Geology, Lyell praised the French for “sapping the foundation of the Christian faith” (p. 125). Lyell expressed open admiration for the efforts and tactics of Voltaire (p. 126). In an 1830 letter, Lyell displayed his anti-biblical sentiments as he yearned to “free the science [geology] from Moses” (p. 23).

What of the apparent contradictions in Lyell’s views? James A. Secord, who wrote an introduction to a modern printing of Lyell’s Principles of Geology, considered Lyell as one who frequently cited the classics to promote his views, and who handled controversial issues in a gentlemanly manner.

Marcy suspects that Lyell, perhaps owing to his background as a lawyer, was skilful in misrepresenting his actual views to a largely religious public.

That way, the audience could be beguiled into accepting his views without becoming alarmed by their implications.

The evolutionary-uniformitarian paradigm comes together

Lyell built his ideas on Hutton. Charles Darwin, in turn, built his on Lyell. In fact, Darwin made it clear, in a letter, that his books half came out of Lyell’s brain (p. 130). Of course, Charles was always influenced by his atheistic grandfather, Erasmus Darwin. Erasmus, in a letter, revealed the influence of his friendships with James Hutton and the openly atheistic philosopher, David Hume (pp. 135–136).

For the century and a half since then, the humanists, in their control of the education system and the media, have largely convinced the West’s public of the truth of evolution.

Charles Darwin himself did not usually express overt hostility to God or to Christianity. He did not need to. Thomas Huxley, known as “Darwin’s bulldog”, amply did it for him. Huxley verbalized undisguised antagonism to Christianity in just about every way (pp. 175 ff.). Most significantly, Huxley (unlike the compromising evangelicals today) realized that the Bible must stand or fall in accordance with its conformity to the facts, and that there is no valid dualism between the Bible’s “factual information” and its “spiritual information” (pp. 180–181).

For the century and a half since then, the humanists, in their control of the education system and the media, have largely convinced the West’s public of the truth of evolution. Atheism has increased from about 1% of the population to about 20% (or more, depending upon nation), and the rest of the population has an unclear (and often un-biblical) concept of God. Prestigious universities, originally founded by Christians to teach the truths about God and the Bible, have long since abandoned even a nominal commitment to the same. Finally, Marcy estimates that at least 75% of the institutions of higher learning that call themselves Christian do not teach a literal Genesis (p. 189). Is the percentage actually that high?

Milt Marcy’s book is a poignant lesson on the atheization of Western societies. It began with the tendency to de-emphasize God and his role in the natural world—much like today’s compromising evangelicals, who are increasingly indistinguishable from outright theological liberals. It then featured anti-biblical science. It eventually progressed to a complete secularization of the education system in the West. Where will it end? Will Christians in Western nations become a small, believing remnant? 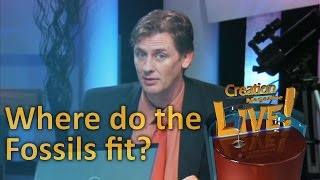 Where do the fossils fit?