‘Ripples’ of galaxies—another blow to the big bang

Astronomers have recently claimed to detect a ‘ripple’ pattern in the clustering of galaxies in the Sloan Digital Sky Survey (SDSS).1 They claim this pattern is a result of sound waves produced during the big bang. However, as with all things, it is important to distinguish between the data and the interpretation. The new discovery does not support the big bang, and is in fact perfectly consistent with biblical creation.

All the stars you see in the night-time sky are part of the Milky Way Galaxy—a large spiral collection of over one-hundred billion stars. The universe contains many such galaxies: some smaller than ours, others much bigger.
Galaxies are organized into clusters, which, in turn, are organized on an even larger scale forming a large non-uniform structure of filaments and voids. You can think of this like a gigantic, irregular spider-web; the galaxies exist primarily along the strands of the web, with fewer in between. 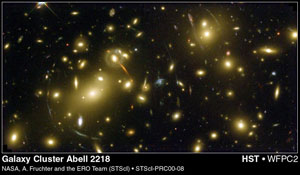 Until recently, the galaxy clustering did not show any well-defined pattern or size scale; filaments of galaxies connect in seemingly random ways and come in many different sizes. But investigators have apparently discovered a weak ‘pattern’ in the arrangement of galaxies.

Galaxies have a very slight preference to be separated by 500 million light-years (five billion-million-million kilometres) than other distances, according to SDSS researchers. This pattern is extremely weak; you would not be able to see it by eye. The SDSS researchers have used some mathematical techniques to extract this ethereal pattern.

This subtle organization of galaxies is the data. The interpretation that many astronomers have offered is that sound waves from the big bang produced this pattern. Let’s examine this interpretation.

In the big bang story of origins, the universe starts out very small and very dense. Some regions are slightly denser than others. This imbalance creates pressure waves (sound2) which propagate through the early universe. Much like a rock thrown in a pond causes ripples to expand, imagine many rocks being thrown in at the same time. The interaction of all the waves would cause a complicated, irregular pattern of ripples. In the big bang model, the sound propagating in the early universe creates regions of greater density.3 Eventually, gravity causes these denser regions to collapse to form stars and galaxies as the universe expands. So, in essence, the sound waves act as ‘seeds’ for galaxies to form.

Secular astronomers believe that the weak pattern detected in galaxy locations (the data) is a result of the sound waves from the big bang (the interpretation). Notice that this interpretation simply assumes that the big bang is true. The biases of the researchers have affected their interpretation of the data. The evidence has been interpreted to match their beliefs.

The big bang, however, has been refuted on the basis of both Scripture and good science. For example, the big bang is not compatible with the order, timescale and cause of the events of creation as recorded in Genesis. Really, the big bang is a secular opponent of the biblical framework.4

This weak cluster-pattern of galaxies does not support the big bang with its billions of years.

So, this weak cluster-pattern of galaxies does not support the big bang with its billions of years. On the contrary, the big bang is simply assumed in order to explain this clustering within a naturalistic framework.

Furthermore, the big bang is not the only unwarranted assumption involved in the ‘sound waves’ interpretation. The secular explanation also assumes that stars and galaxies can form from regions of high density. But this has never been observed. In fact, no galaxy has ever been observed to form at all! And there are tremendous scientific difficulties in getting stars to form from collapsing gas clouds.5 No wonder that even many secular scientists blast the big bang.6

From a biblical creation view, there is no reason to think that the clusters of galaxies were formed by sound waves at all. We know from Scripture that God made the stars (and thus the galaxies, which are composed of stars) on Day 4 of the Creation Week (Genesis 1:16). It may be that the galaxies were organized in a non-random way by the Creator’s hand for His pleasure.7 The subtle pattern of galaxy locations (if confirmed) would be perfectly consistent with the order and creativity we have come to expect from the God of Scripture.