What Would You Think?

What would you think about someone who claimed to hold to a certain set of rules, ethics or morals, but then clearly displayed by their own actions that they didn’t truly believe those claims? What would you think of a policeman who promised to uphold the law and protect the innocent, but then stood idly by, watching one of those innocent people being robbed by a thief? Or a soldier who took an oath to defend his homeland with his life, but then stepped aside and refused to oppose an invading enemy? But let’s make it a bit more personal. What about the husband who promised to always be faithful to his wife, only to leave her for another woman? Or the child told by a parent how much they are loved, except that the parent never seems able to set aside any quality time to spend with the child.

Maybe you might say some of these people acted traitorously, some uncaringly. Perhaps you might say they can’t be trusted or that they are liars. You might even say that they have been hypocritical.

These were not people who had grown up in a culture devoid of any mention of God, but actually, many were initially churchgoers.

Now how do you think people look upon those who call themselves Christians, who proclaim to be followers of Jesus Christ, followers of His Word written in the Scriptures, men and woman who, the Bible says, should be the “light of the world”1 and the “salt of the earth”?2 What do they expect to see? I suggest that most of them would expect those Christians to be people who adhere to what is written in the Bible, that they would hope Christians actually believe what they claim to follow.

Larry Alex Taunton, executive director of a non-profit Christian group called Fixed Point Foundation,3 conducted a study in 2012 to understand why people became atheists. The target group were college students who were also members of Secular Student Alliances (SSA) or Freethought Societies (FS). What led to their journey of unbelief? Taunton discovered that the answers were not at all what he expected.

In an article4 he wrote on the outcomes of the study, Taunton describes how these were not people who had grown up in a culture devoid of any mention of God, but actually, many were initially churchgoers. Indeed, they “had not chosen their worldview from ideologically neutral positions at all, but in reaction to Christianity. Not Islam. Not Buddhism. Christianity.” They believed that the “mission and messages of their churches was vague.” When asked what they found unconvincing about the Christian faith, they spoke of such topics as “evolution vs. creation, sexuality, the reliability of the biblical text, Jesus as the only way, etc.” These were serious-minded people who had gone to church looking for answers on these topics, yet “often concluded that church services were largely shallow, harmless, and ultimately irrelevant.” 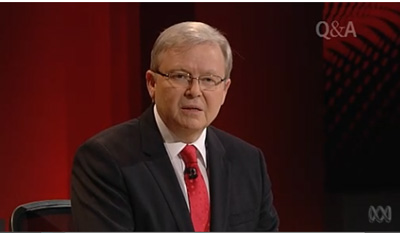 On 2 September 2013, the then Prime Minister of Australia, Kevin Rudd, five days prior to an election in which his party was convincingly defeated, was the subject of a question and answer forum on national television in that country. Rudd, a professing Christian (Anglican) whose background includes student involvement with a prominent evangelical movement, was challenged by a pastor in the audience on why he had changed his mind recently to now support ‘gay marriage’. Specifically, the pastor asked why he did not believe the words of Jesus in the Bible regarding the definition of marriage. The PM dismissively claimed that the Bible also said that ‘slavery was the natural human condition’, and thus perhaps we should all have supported the proslavery side in the US Civil War. In fact, this notion (as CMI’s One Human Family book explains) was actually from Aristotle, not the Bible. This was also pointed out to the Australian media by the then-recently-appointed evangelical Anglican Archbishop Glen Davies. (For the facts on what the Bible actually does say about slavery, see The Bible vs slavery: response to critics.)

There is an increasing acceptance of ‘gay marriage’ among society as a whole. Yet on most indicators, it seems that the spectacle of a professing Christian ‘dissing’ the Bible, in effect, did not cause unbelievers to increase their respect for either Rudd or the faith he purports to hold.

However these same students consistently “expressed their respect for those ministers who took the Bible seriously.” Taunton recounted a conversation he had with the late Christopher Hitchens, the well-known misotheist, after a debate conducted in Billings, Montana during 2010. Hitchens was asked why he hadn’t tried to verbally savage Taunton on stage the way he had so many others. The reply given was immediate and emphatic, “Because you believe it”, which was in reference to the Bible. These “former church-attending students expressed similar feelings for those Christians who unashamedly embraced biblical teaching.”

Do you see what has occurred here? These students were looking for truth and authenticity, but “having failed to find it in their churches, they settled for a non-belief that, while less grand in its promises, felt more genuine and attainable.” They were looking for those men and women who were willing to take an uncompromising stand on their biblical belief.

All of this reinforces the message Creation Ministries International has been equipping Christians and churches with. In general, people simply do not respect anyone who is willing to compromise their biblical stand. God’s Word demonstrates its power when it’s preached with conviction, not when it has been weakened and watered down. How can you trust someone is telling you the truth, when they proclaim that Jesus Christ is the only way to be saved, if they are also willing to say that the interpretation of a universe created by God in six days is not as straightforward as it appears in the Bible? That it needs to be compromised or ‘explained away’ in order to align with the views of the secular world? The moment the foundation you’re standing upon becomes unstable, everything that has been built upon it is in danger of collapse.

Many believe that topics such as creation/evolution are a side issue, and should not be discussed because they are divisive. It seems the reality is that the people who are leaving the church, who are falling away, do not believe that to be the problem. In particular, young people are looking for answers to their questions. When we avoid those answers, or show in our responses that we are unwilling to stand on what the Bible plainly teaches, we make it far more likely that they will turn to others for those answers. Rest assured, the spiritual forces that oppose us are only too willing to oblige in providing answers that undermine confidence in the Gospel.

The message people are hearing is that the Bible is a book of stories that has no connection to the real world. When they constantly hear that message and no one appears able or willing to ”make a defense to anyone who asks you for a reason for the hope that is in you; yet do it with gentleness and respect”,5 why wouldn’t they turn away from a church they see as irrelevant?

Ironically, one of the reasons that people fail to take a stand on Genesis history is that they fear losing respect in the eyes of the world. Yet these results seem to show that the opposite is the case.