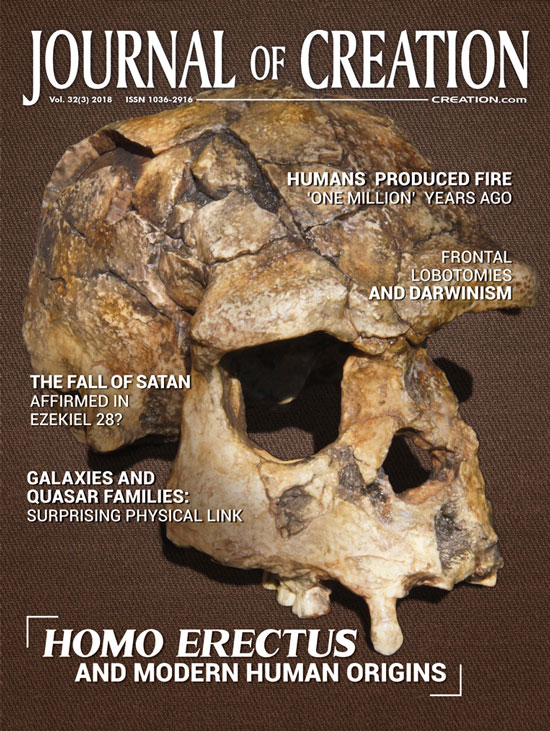 Creation scientists have long argued that uniformitarians are assigning far too much time to the deep ice cores of Antarctica and Greenland. Since the ice sheets started forming during the post-Flood Ice Age, these ice sheets can be no more than 4,500 years old.1 And yet uniformitarian scientists routinely assign six-figure ages to those cores.2-6

So deep ice cores, despite popular perception, are not airtight arguments for an old earth.

The Greenland ice cores would seem to present a stronger argument for an old earth. Their ages were supposedly obtained by ‘simple’ counting of visible layers. However, creation scientists have plausibly argued that uniformitarians are greatly over-counting the true number of annual layers, although space does not permit here a detailed discussion.1,12,13

So deep ice cores, despite popular perception, are not airtight arguments for an old earth. Moreover, one might occasionally expect to find positive evidence for the youthfulness of the ice sheets.

Science popularizer and creation opponent Bill Nye recently highlighted (surely unwittingly!) evidence that presumed ‘annual’ layers within the Greenland ice sheet are not necessarily annual after all. Ironically, this evidence, which involved tephra (volcanic ash and debris), was featured in a recent documentary which denigrated creation science.14

The scientists noted the apparent infrequency of tephra layers within the deepest core sections:

This apparent decrease of volcanic tephra layers is exactly what one would expect if uniformitarian age models are assigning hundreds of thousands of years of fictitious time to the deep core sections.

“A striking feature emerging from our study is that the frequency of visible tephra in the Vostok and EDC cores decreases dramatically in the ice older than ca 220 ka (Fig. 5). The last [i.e. most recent] 220- ka sections of both records contain about a dozen discrete tephra layers while only one event is identified at EDC and two at Vostok in the interval 220–414 ka, encompassing more than two complete climate cycles. Tephra layers even disappear from 414 to 800 ka, i.e. the bottom of the EDC core.”16

They noted that this ‘dramatic’ drop in visible tephra layers was also apparent in the deep Dome Fuji core (figure 1a). Although dozens of tephra layers were visible in the upper part of the core,17 only two such tephra layers were visible in the deep part of the Dome Fuji core, thought to represent the time from 230,000 to 700,000 years ago.16 Because the Dome Fuji core is about 1,500 to 2,000 km from the Vostok and Dome C cores, they concluded that the dearth of visible tephra layers was not an artefact but a ‘regional pattern’. Although they acknowledged that not all volcanic eruptions necessarily deposit tephra on the ice sheets, and that not all tephra layers are preserved, they concluded that “these factors likely act randomly at the long timescale of our observations, and were hardly responsible for the systematic absence of old volcanic layers at the different drilling sites”.16 They also concluded that the lack of visible tephra layers could not be blamed on thinning of the ice deep within the cores, nor could it be explained by changes in atmospheric transport of aerosols during the Pleistocene. They concluded that this apparent decrease in tephra frequency might be due to less intense volcanic activity in the South Sandwich Islands in the distant past. However, this would require greatly reduced volcanic activity. In the case of the Dome Fuji core, ~500,000 years would have elapsed with no apparent tephra fallout!

Of course, the creation model provides another possibility. Because uniformitarian age-depth models (incorrectly) assign vast ages to the greatest depths of the long Antarctic cores, this results in an apparent decrease in the frequency of tephra layers at greater core depths. Of course, this is exactly what is observed.

In fact, when the tephra layers are plotted as a function of depth, rather than time, the spacing between the deepest tephra layers is not nearly as pronounced (figure 1b), although tephras are generally still absent from the very deepest core sections. Heavy snowfall early in the post-Flood Ice Age, with decreasing snowfall at later times, might cause volcanic eruptions to appear somewhat less frequent at the greatest depths. It may be that this observed pattern is the result of both factors.

The Vostok, EPICA Dome C, and Dome Fuji cores are the only three deep Antarctic cores with assigned ages greater than 400,000 years whose tephra layers have been thoroughly studied, and all three cores show a dramatic decrease in the apparent frequency of their deepest tephra layers. Coincidence, or an indication of a systematic error in uniformitarian age models? This apparent decrease of volcanic tephra layers is exactly what one would expect if uniformitarian age models are assigning hundreds of thousands of years of fictitious time to the deep core sections.

Skeptics have long seen the deep ice cores as an unanswerable argument for an old earth. However, creation scientists have already provided a plausible defence against this claim.1,12,13 Creation researchers should now go on ‘offence’, working to show that the creation model provides a superior framework for interpreting the ice core data. These deep Antarctic tephra layers are a step in that direction.