The Fall: It was all downhill from there …

If hallucinogenic drugs are bad for people why did God make them?

Today’s Feedback comes from Brenda L. from British Columbia, Canada who is wondering how to communicate to a non-believer why God would have created plants with hallucinogenic effects. In essence it is a sub-set of the over-arching question of ‘If God is a good God, why are there bad things in the world’. Fellow Canadian Calvin Smith responds …

I'm sure the marijuana plant didn't exist in the Garden but came into existence after the flood. How do I explain to a non-Christian that God didn’t intend it for its present use? or the opium from the poppy flower?

Hi Brenda, thanks for your email.

I have no problem believing that Cannabis sativa was in the Garden of Eden. Both hemp varieties and marijuana varieties are of the same genus and species, Cannabis sativa. The hemp plant is commonly cultivated for industrial uses like ointments, oils, fibre for clothing and rope, paper, construction etc. It is a very useful plant.

The terms hemp and cannabis are often used interchangeably, but have separate connotations depending on how they are used. All Cannabis sativa plants contain resinous glands called trichomes that contain tetrahydrocannabinol (THC), which is the substance that gives it its psychoactive properties (it’s what gets people ‘high’).

God made a good world in the beginning with plants for a variety of uses, and while some plants are undoubtedly beneficial with a variety of health benefits, God never instructed people to breed and then burn specific plants and inhale them.

The ‘marijuana’ cannabis plant has been selectively bred to have high amounts of THC whereas the ‘hemp’ cannabis plant usually has far less. This is like any type of selective breeding which can be used to produce tastier fruits and vegetables, crops with pest resistance or animals with more meat for food.

The breeder seeks parent plants with slightly higher amounts of whatever substance they are looking for and focuses that production, resulting in a higher yield than would normally occur. There are maximums that can be reached in any situation however and genetics is no friend of evolution.

God made a good world in the beginning with a variety of plants with a variety of health benefits and uses. But God never instructed people to breed/burn/inhale them. Of course sinful humans choose to do destructive things to themselves all of the time.

There was a change at the time of the Fall however, and alterations to the environment occurred as a direct result. Things came into being that were not expressed in creation previous to that, so all of the ‘bad things’ we see in creation today are not just the result of the misuse of what God originally created.

Also, God foresaw the Fall. Although controversial, researchers have had some success using a chemical produced by hemp (cannabidiol, or CBD, which does not cause psychoactive effects) in the treatment of seizures in those suffering from epilepsy1. And plants like the opium poppy, the source of morphine, are a blessing to those suffering painful illness in today’s fallen world. This isn’t surprising as Ezekiel 47:12 speaks of healing properties in plants.

But again, such substances can also be abused by sinful individuals and promoted negatively by those seeking to exploit people for money and other reasons. 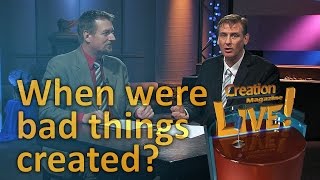