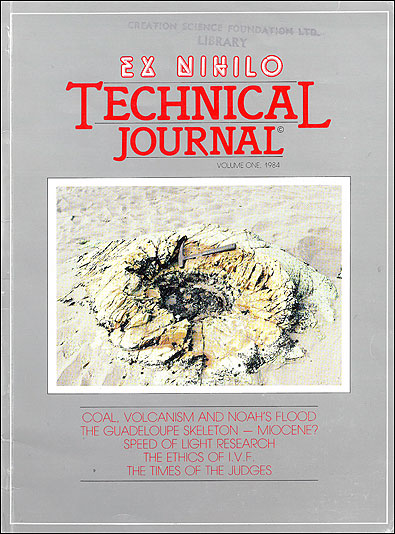 The fossilised human skeleton from Guadeloupe has received considerable publicity as a result of Cooper’s article1 last year. My investigations, which extend the discussion between Stringer and Cooper,2 are reported here.

A number of skeletons were discovered in 1805 near Moule, Guadeloupe, and the governor, General Ernouf, decided to remove one of them. They were deemed interesting as no one had previously found and studied fossilised human bones. Before the skeleton could be sent to Paris, the island was taken by the English, who were then at war with France. Admiral Cochrane took charge of the skeleton and eventually it found its way to the British Museum. It was described by Konig in a paper published in 1814.3 At the time, some Christians thought the skeleton was evidence for the Deluge, 4 but the limited information that was available meant that the argument was tentative. Cuvier took an interest in the skeletons, as they had a bearing on his own understanding of the past. He believed in multiple catastrophes and multiple creations, with man belonging to the most recent creation. He did not expect to find human remains in anything but superficial deposits. Fossilised human bones in hard limestone were worthy of his attention. In 1818, he visited the British Museum to see their skeleton and to discuss its interpretation with Konig. Shortly afterwards, General Donzelot extracted a second skeleton (Fig. 1) and sent it to Paris. Thus, Cuvier was able to examine both specimens in great detail. He concluded that the limestone was composed of a calcareous sand which had become cemented to form the hard rock. The sand particles were the remains of marine creatures, and within the rock more complete examples were found of sea shells (comparable to Helix acuta and Turbo pica) and of land shells (Bulimus guadalupensis). Cuvier also described the place where the skeletons were found: the rock formed a bank which was mostly covered by water at high tide. The bank was enlarged daily by the addition of sand particles and was especially well compacted where water evaporation was high. He stated that this type of rock was common in the Antilles Archipelago and was know by the natives as “God’s masonry” (Maconne-bon-dieu).

Most of this information has been derived from Cuvier’s definitive conclusion published in 1825.5 The illustration of the Paris specimen is also taken from that volume.

So by 1825, the view of Cuvier and the wider academic community was that the skeletons were of recent origin and were encased in a rock which was a superficial deposit in the intertidal zone. Cuvier used the word “travertine” to describe the rock. Comments will follow on how the mechanism of formation came to be understood more clearly.

The skeletons were mentioned by Duchassaing in a paper on the geology of Guadeloupe published in 1847.6 It was generally believed, he reported, that the skeletons belonged to natives who had earlier inhabited the island. These were the Galibis. He explained the formation of the rock using stalactites as an analogy. Calcium carbonate was carried by rain water to the beach, where it was precipitated, sticking the sand grains together. He described a number of objects he had found in these cemented sands: stems of vines (Coccoloba uvifera) and other plants (Gorgonia flabellum), land snails (Bulimus guadalupensis) and pieces of pottery. In the upper part of the formation, he found a dog bone and some pieces of flint. He was quite convinced that the rock was recent, and thoroughly agreed with Cuvier. Indeed, he declared that since Cuvier’s “Discours”, the modern origin of these deposits had not been contested.

It would be possible to continue the historical survey and to document the continuing acceptance of Cuvier’s analysis. However, sufficient has been said to show that, as a matter of historical fact, the argument that the skeletons were buried during the Deluge was not seriously considered after 1825. Cooper’s claim that the skeleton was removed from public display because it was embarrassing for the evolutionists appears to have no foundation in history.

In my judgment, the key to understanding the skeletons is to be found in a study of the limestone encasing them. Konig and Cuvier both described the rock as being composed of cemented calcareous sand grains. The mechanism of formation of these beach deposits was not elucidated in their day, but much work has taken place since then. The rocks are now referred to as beach rock, and they normally occur in the intertidal zone as a series of thin beds which dip seawards at less than 15°. They form in warm, tropical regions where evaporation rates are high. There are a variety of modes of cementation, but the most important is precipitation of aragonite (calcium carbonate) from sea water. Every time the tide retreats, evaporation of water from the beach sands contributes a little to the cementation process. Any objects enclosed by the beach sands will become cemented, observations having recently been made of the incorporation of broken beer bottles and pepsicola cans.

Thin sections of the limestone enclosing the skeleton have been made at the British Museum (Natural History) and I have borrowed these for microscopical investigation. Figure 2 shows a small part of one of the sections. The sand grains are clearly visible and they are surrounded by a thin rim of radial fibrous aragonite needles (the cement). The grains are almost entirely of biogenic origin. Some of the particles are difficult to identify, but those that are unambiguous are as follows:

The skeletal material is characteristic of life in shallow, marine waters. The association of the sand grains with this environment, together with the grain-supported structure cemented by the uniform aragonitic fringe, is sufficient to identify the material as beach rock.

A modern description of the beach rocks of Moule has been published by Saint-Michel.7 He describes thin beds of about 12 cm thickness which collectively have the appearance of an amphitheatre following the curve of the beach. Beds to the east and west of Moule contain archaeological remains, and these have been examined by Clerc. Three distinct levels have been found. The bottom level contains pottery, jewellery, axes, scrapers and cooking remains. The intermediate level contains lower quality pottery of distinctive design and skeletons in various positions of burial. The upper level contains very crude pottery, stone implements and an abundance of shells.

In my view these facts speak for themselves. There is no evidence that the skeletons are encased in Miocene limestone. All the evidence suggests that human remains are preserved in beach rock, and that the sites are of archaeological significance.